Cheadle CLC railway station served the village of Cheadle, six miles south of Manchester. It was renamed to Cheadle North on 1 July 1950.

The station was opened on 1 February 1866 by the Stockport, Timperley and Altrincham Junction Railway (ST&AJ). [1] On 15 August 1867 the ST&AJ was merged into the Cheshire Lines Committee (CLC) joint railway. The CLC survived intact at the 1923 UK railway grouping and continued to operate the station until the CLC was absorbed into the nationalised British Railways (BR) on 1 January 1948. [2] BR continued to operate the station for a further fourteen years until closure of the station, and others on the line, on 30 November 1964 [3] as part of the Beeching Axe.

Train services from the station 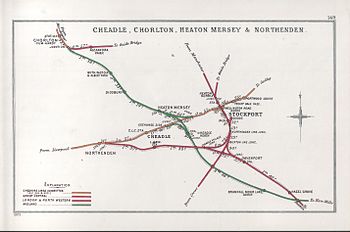