Roads and freeways in Chicago

Roads and freeways in Chicago

Roads and freeways in Chicago summarizes the main thoroughfares and the numbering system used in Chicago and its surrounding suburbs. 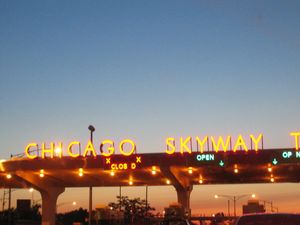 Chicago's streets were laid out in a grid that grew from the city's original townsite plat. Streets following the Public Land Survey System section lines later became arterial streets in outlying sections. As new additions to the city were platted, city ordinance required them to be laid out with eight streets to the mile in one direction and 16 in the other direction. A scattering of diagonal streets, many of them originally Indian trails, also cross the city. Many additional diagonal streets were recommended in the Plan of Chicago, but only the extension of Ogden Avenue was ever constructed. In the 1950s and 1960s, a network of superhighways was built radiating from the city center.[1]

As the city grew and annexed adjacent towns, problems arose with duplicate street names and a confusing numbering system based on the Chicago River. On June 22, 1908, the city council adopted a system proposed by Edward P. Brennan; amended June 21, 1909. The changes were effective September 1, 1909 for most of the city.[2] Addresses in Chicago and some suburbs are numbered outward from baselines at State Street, which runs north and south, and Madison Street, which runs east and west.

A book was published in 1909 by The Chicago Directory Company indexing the old and new street numbers for most of Chicago. This volume is available on line in pdf format indexed by initial letter, Plan of Re-Numbering, City of Chicago, August 1909.[3] The opening text of this useful book says:

"EXPLANATORY
The new house numbering plan passed by the City Council June 22, 1908, to be in force and effect September 1, 1909, makes Madison Street from Lake Michigan to the city limits on the west the base line for numbering all north and south streets and streets running in northerly or southerly direction. For east and west streets and streets running in a generally east and west direction the base line is State Street from the southern city boundary line to North Avenue, thence extended by an imaginary line through Lincoln Park and Lake Michigan."

The downtown area did not conform to this system until April 1, 1911, per an amendment to the law on June 20, 1910. Downtown was defined as Lake Michigan on the east, Roosevelt Road (Twelfth Street) on the south, and the Chicago River on the north and west. The addition to cover downtown was published, and is also on line as a pdf indexed by downtown street name.[4]

"The 1909 address change did not affect downtown Chicago, between the river and Roosevelt Road, the river and Lake Michigan. The ordinance was amended June 20, 1910 to include the downtown area. The new addresses for the “loop” went into use on April 1, 1911."

The blocks are normally counted out by "hundreds," so that Chicagoans routinely give directions by saying things such as "about twelve hundred north on Western" or "around twenty-four hundred west on Division" (which both describe the intersection of Western Avenue (2400 W) and Division Street (1200 N)).

South of Madison Street most of the east-west streets are simply numbered. The street numbering is aligned with the house numbering, so that 95th Street is exactly 9500 South. "Half-block" east-west thoroughfares in this area are numbered and called places; 95th Place would lie just south of and parallel to 95th Street, and just north of 96th Street.

Every four blocks (half-mile) is a major secondary street. For example, Division Street (1200 N) is less important than either Chicago Avenue (800 N) or North Avenue (1600 N), but is still a major thoroughfare. However, this is not always the case; for example, on the city's Far North Side, Peterson Avenue (6000 N) is a more heavily trafficked street than Bryn Mawr Avenue (5600 N), which sits exactly at the 7-mile marker. U.S. Route 14 is routed along Peterson between Clark Street at 1600 W and Cicero Avenue at 4800 W, whereas Bryn Mawr is discontinuous, split into two segments in this part of the city by Rosehill Cemetery between Damen and Western Avenues.

Even-numbered addresses are found on the north and west sides of a street, and odd numbers are found on the south and east sides, irrespective of the streets' position relative to the corner of State and Madison.

Diagonals, even if they were to run exactly 45 degrees off of the cardinal directions, are numbered as if they were north-south or east-west streets. Examples are North Lincoln Avenue and Ogden Avenue, which bends at Madison and changes from North Ogden to West Ogden.

The northernmost street in Chicago is Juneway Terrace (7800 N), just north of Howard Street. The southern boundary is 138th Street. The eastern boundary of Chicago is Avenue A/State Line Road (4100 E) along and south of 106th Street, and the furthest west the city extends is in the portion of O'Hare International Airport that lies in DuPage County, just east of Elmhurst/York Road.

While all north-south streets within city limits are named, rather than numbered, smaller streets in some areas are named in groups all starting with the same letter; thus, when traveling westward on a Chicago street, starting just past Pulaski Road (4000 W), one will cross a mile-long stretch of streets which have names starting with the letter K (From east to west: Keystone, Karlov, Kedvale, Keeler, Tripp, Kildare, Kolin, Kostner, Kenneth, Kilbourn, Kolmar, Kenton, Knox, Kilpatrick, Keating), giving rise to the expression "K-town." These streets are found approximately in the 11th mile west of the Indiana state line, and so begin with the 11th letter of the alphabet. A mile later, just past Cicero (4800 W), the starting letter changes to L, and mile by mile the letters progress up to P. Additionally, for most of the first mile west of the Illinois/Indiana state line, streets are lettered from Avenue A at the state line (4100 E) to Avenue O (3430 E), forming the A group. The areas that might otherwise be the B through J groups are the older parts of the city where street names were already well established before this system was developed (although some small groups of streets seem to have been given names intended to conform to the system), and the Q group (8800 to 9600 W) would fall west of the city, as the only land in Chicago west of 8800 West is O'Hare Airport, undeveloped forest preserve, and a small strip of land connecting O'Hare to the rest of the city and containing only Foster Avenue.

Some suburbs number their east-west streets in a continuation of the Chicago pattern, and even more number their houses according to the Chicago grid. A few suburbs also number their north-south avenues according to the Chicago grid, although such numbering vanished from Chicago itself long ago (the alphabetical naming scheme was devised to help eliminate it). For example, the 54th/Cermak terminus of the Pink Line is located near the intersection of 54th Avenue and Cermak Road (22nd Street) in Cicero. This is 54 blocks west of State Street in Chicago. A minor street 54½ blocks west of State Street would be called 54th Court.

This pattern continues as far west as Plainfield, which has a 252nd Avenue. Suburbs that follow the Chicago numbering system include Niles, Rosemont, Morton Grove, Skokie, Lincolnwood, Franklin Park, River Grove, Evergreen Park, Oak Lawn, Oak Forest, Matteson, Channahon, unincorporated parts of Des Plaines, and other parts of Cook County, Will, and DuPage Counties. Other suburbs, including Evanston, Park Ridge, Oak Park, Glenview and Wilmette use their own numbering systems. Lake County IL uses State and Madison as a base line as do DuPage County. For example, 32W234 in DuPage is 32 miles west of State St., 38964 in Lake County would be 38 miles north of Madison St. and is normally used without the direction letter.

Some Chicago suburbs in adjoining Northwest Indiana also use the Chicago numbering system. These include East Chicago, Whiting, and Hammond. There are even examples further south in Lake County in Dyer and Schererville such as 205th Place through 215th Street (these examples coordinate with the Chicago grid, not the Gary street system). Other municipalities, such as Munster, Highland, and Griffith are based on the Gary, Indiana numbering system, beginning with 5th Avenue in Gary and increasing numerically as one travels southward. Examples in far south Lake County, Indiana near Lowell and Cedar Lake include 109th Avenue, 117th Avenue and 203rd Avenue.

The aforementioned pattern also occurs in Waukegan, Illinois, with Washington Street being the baseline between north and south. Nearby municipalities such as Gurnee, Park City, and North Chicago continue with the Waukegan numbering pattern, while rural areas in Lake County, Illinois follow the Chicago grid.

(No part of Golf Road, Dempster Street, Oakton Street, 143rd Street, or 159th Street actually lies within the boundaries of Chicago. These streets are included for reference, since they are a continuation of the Chicago mile street pattern into the suburbs.) [6]

Many streets in downtown Chicago are considered major streets:

The half-mile numbered streets on the South Side are all secondary streets: 35th, 43rd, 51st, 59th, etc.; all are numbered aside from Marquette Road, running at 6700 S, west from Martin Luther King Jr. Drive (400 E) to the city's western limit at Cicero Ave (4800 W), near Chicago Midway International Airport. East of King to near Lake Michigan at 2400 E, it is called 67th Street, and Marquette is aligned one block to the north on what would be 66th Street.

(No part of Old Orchard Road, Church Street, or Main Street actually lies within the boundaries of Chicago. These streets are included for reference, since they are a continuation of the Chicago mile street pattern into the suburbs.)

The numbering system is also copied in Milwaukee.[citation needed]

The following streets run diagonally through Chicago's grid system on all or part of their courses. These streets tend to form major 5 or 6-way intersections. In many cases they were Indian trails, or were among the earliest streets established in the city. Diagonals are numbered as north-south or east-west streets. Examples are North Lincoln Avenue and Ogden Avenue, which bends at Madison and changes from North Ogden to West Ogden. 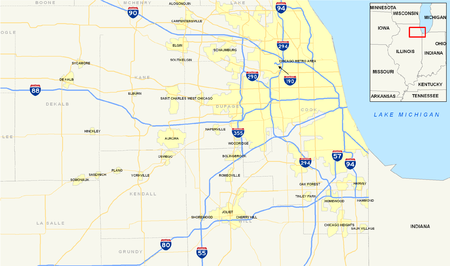 The city of Chicago proper has seven major interstate highways crossing through it. However, the various roadways are more typically known to Chicagoans not by their Interstate numbers but rather by various given names. The local vernacular uses "Expressway" for most Interstate grade highways; however, it is most common for Chicagoans to omit the designation entirely and refer to the highway by just its name, i. e. "The Eisenhower," or "The Dan Ryan" will be immediately comprehensible to any Chicagoan. 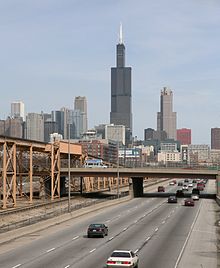 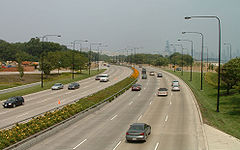 South Lake Shore Drive, looking north into the heart of the city