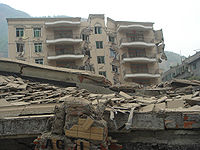 The stimulus includes plans to rebuild areas damaged by the 2008 earthquakes.[1]

The 2008–2009 Chinese economic stimulus plan (simplified Chinese: 扩大内需十项措施; traditional Chinese: 擴大內需十項措施; pinyin: Kuòdà Nèixū Shíxiàng Cuòshī) is a RMB¥ 4 trillion (US$ 586 billion) stimulus package announced by the central government of the People's Republic of China on 9 November 2008 as an attempt to minimize the impact of the global financial crisis on the world's second largest economy.[2][3] Critics of China's stimulus packet have maintained that it has made matter worse by pumping excessive investments into an economy which already was overheated and marked by overcapacity and overinvestment.

On June 2009, the World Bank raised its growth forecast in China for 2009 from 6.5% to 7.2% amid signs that the economy is doing better than expected, which has been helped by the stimulus package. But it says the country's exports are still down, as the rest of the world struggles with the global recession. It was previously predicted in March 2009 that the Chinese economy would grow by 6.5% in 2009, several percentage points down on 2008's growth.

A statement on the government's website said the State Council had approved a plan to invest 4 trillion yuan in infrastructure and social welfare by the end of 2010.[3][4] This stimulus, equivalent to US$586 billion, represented a pledge comparable to that subsequently announced by the US, but which came from an economy only one third the size.[5] The stimulus package will be invested in key areas such as housing, rural infrastructure, transportation, health and education, environment, industry, disaster rebuilding, income-building, tax cuts, and finance.[6]

China's export driven economy started to feel the impact of the economic slowdown in the United States and Europe, and the government had already cut key interest rates three times in less than two months in a bid to spur economic expansion.

The stimulus package was welcomed by world leaders and analysts as larger than expected and a sign that by boosting its own economy, China is helping to stabilize the world economy. World Bank President Robert Zoellick declared that he was ‘delighted’ and believed that China was ‘well positioned given its current account surplus and budget position to have fiscal expansion.'[5] News of the announcement of the stimulus package sent markets up across the world.[7]

As of November 15, 2008, Beijing standard time, it was revealed that the central government would only provide 1.2 trillion yuan of funds.[8] The rest of the funds will be reallocated from the budget of provincial and local governments.

Chinese banking officials were reportedly considering establishing a fund worth between 600 billion and 800 billion yuan to purchase domestic shares listed on the Shanghai Stock Exchange, particularly those in the Shanghai Composite, in the event the Shanghai Index fell to 1,500 points.[9]

On March 6, 2009, China's National Development and Reform Commission announced a revision of the stimulus and published a breakdown of how the funds would be distributed.

Public infrastructure development took up the biggest portion – 1.5-trillion yuan, or nearly 38% of the total package. The projects lined up include railway, road, irrigation, and airport construction.

The second largest allocation – one trillion yuan – went to reconstruction works in regions hit by the 8-magnitude Sichuan earthquake last May; that was followed by funding for social welfare plans, including the construction of low-cost housing, rehabilitation of slums, and other social safety net projects.

Technology advancement mainly targeted at upgrading the Chinese industrial sector, gearing towards high-end production to move away from the current export-oriented and labor-intensive mode of growth. This was in line with the government's latest Blueprint for revitalizing 10 selected industries.

To ensure sustainable development, the Chinese government also allocated some 210 billion yuan, or 5.3% of the stimulus package for promoting energy saving and gas emission cuts, and environmental engineering projects.

China's economic growth was sustained by the economic stimulus and in addition, assisted neighboring countries with the economic recovery in 2010.[12] Chinese economic growth was around 10 percent even as its European and North American economies were slowing.[13] The stimulus provided funds for infrastructure projects and housing developments. Some were used to assist local governments to lend money to state-owned companies to develop housing estates, roads and bridges.[13] This will drive employment in areas of manufacturing, steel, cement and other sectors of the economy.[13][14] There is also a risk of the stimulus generating inflation and a property bubble.[13]

Due to the success of the economic stimulus plan, the central government has tightened regulation in the financial system on banks to curb lending amid fears of a property bubble which could put a dent on economic recovery.[15]