Macau is a city on the southern coast of China. It is located at the south of Guangdong Province, on the tip of the peninsula formed by the Zhujiang (Pearl River) estuary on the east and the Xijiang (West River) on the west. Macau is situated 60 km west of Hong Kong and 145 km southwest of Guangzhou, the capital of Guangdong Province. It is immediately adjacent to the Zhuhai Special Economic Zone.

The region comprises the Macau Peninsula and the islands of Taipa and Coloane. Macau was once an island but gradually a connecting sandbar turned into a narrow isthmus. Land reclamation in the 17th century made Macau into a peninsula, and a barrier gate was built to mark the separation between the peninsula and the mainland. Pre-colonial records show that Macau totaled only 2.78 km2 (1.07 sq mi) but began to increase as a result of Portuguese settlement. Land growth has accelerated since the last quarter of the 20th century, from 15 km2 (5.8 sq mi) in 1972 to 16.1 km2 (6.22 sq mi) in 1983 to 21.3 km2 (8.22 sq mi) square kilometers in 1994. Macau's size has gradually increased as result of continued land reclamation, especially on Taipa and Coloane. In 2010, the total land area was approximately 29.7 km². 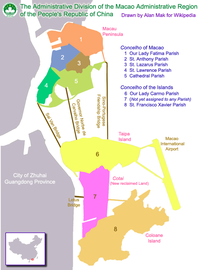 The administrative divisions within Macau (Click here for Satellite Image)

Macau has generally flat terrain resulting from extensive land reclamation, but numerous steep hills mark the original natural land mass. The modern high-rise skyline of Macau obscures much of the hilly landscape. The Macau skyline both defines and obscures its topography.

The Macau Peninsula is narrow in shape but varies in terrain:

The West Ocean Watching Hill, a tranquil scenic spot, is noted for the cathedral and the bishop's mansion on its top. Viewed from the Nanxi Bay in the distance, particularly against the evening glow, the cathedral and the mansion stand in their full splendor. From the top of the Persimmon Hill, one sees the Nanxi Bay and the high rise buildings there as well as the sea and the sea - spanning bridge.

Although Macau is located in the tropics, it has a humid subtropical climate (Köppen climate classification Cwa), because the Siberian pressure system in the winter pushes cool air further south than similar semipermanent permanent high pressure systems. Its average year-round temperature is 22.7 °C (72.9 °F). Summers are very hot and humid: the July average temperature is 28.9 °C (84.0 °F) and the highest daytime temperature could reach 35 °C (95 °F). However, the heat is generally less intense than many places in mainland China due to the coastal location. Winters are short and mild: the January average is 15.0 °C (59.0 °F) and the lowest temperature could drop to 5 °C (41 °F), but very rarely any lower. There is about 2,120 millimeters (83 in) of rainfall annually, with drier winters.

Macau is exposed to tropical storms originating from the southern Pacific Ocean during the summer. Major destruction occurred in September 1874, when a devastating typhoon hit Macau and high seas swept across the low-lying area of the peninsula. There are always a few tropical storm occurrences in Macau each year (typically between May to October), although they vary in strengths. When they occur, they usually bring strong winds, rainfall and lower temperatures.

Prevailing winds and weather types change follow the monsoon pattern. It is warm and moist when the southeast and southwest winds coming from Pacific Ocean, and typhoons are relatively common during summertime; and is dry and slightly cold when the north winds coming from Siberia or the northern part of Mainland China.

There are moderate to high levels of humidity year-round, with an annual average of 79.3%. Annual sunshine totals are moderate, at more than 1800 hours.

Negligible. In the past, large amounts of granite were extracted from Macau's hills for use as building material.

Relying on the water supply of Xijiang River, Macau is at present suffering its worst ever crisis of salinity in freshwater during dry season in 2006 which takes place in late winter and early spring time. The salinity level of freshwater has recently aggrandized far above the standard set up by the World Health Organization or WHO. By the end of 2007, Macau will be able to solve the problem of tap-water supply with relatively high level of salinity after the completion of the Ping Gang project. This project is aimed at shifting the intake of raw-water on the Xijiang River 20 km upstream in order to give a wide berth to the salt tide in the province of Guangdong.

Land use and reclamation

Macau Peninsula and Ilha Verde in 1889

Macau Peninsula, Taipa and Coloane in 1912

No arable land, pastures, forest, or woodland. Because of this deficiency, Macau's people traditionally have looked to the sea for their livelihood.

In 2010 plans were announced for an additional 3.5 square kilometres of land reclamation in Macau, to be carried out over five years and divided into six phases. These areas cover an area east of the Outer Harbour Ferry Terminal, an area south of Avenida Sun Yat Sen, and the north side of Taipa Island.[2]

The change of total area of Macau (in km square) since the year of 1912: