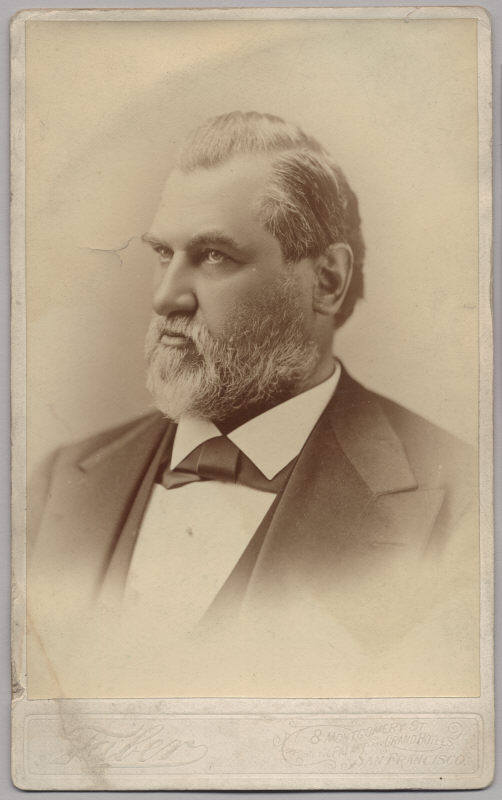 Amasa Leland Stanford (, ndash , ) was an American , and founder of .

He was born in , one of eight children of Josiah and Elizabeth Phillips Stanford. Stanford's ancestors settled in the of around 1720. He attended Clinton Liberal Institute, in , and studied law at Cazenovia Seminary in Cazenovia, New York and later in Albany. He was admitted to the bar in 1848, and then moved to , where he began law practice with Wesley Pierce. He married Jane Elizabeth Lathrop in Albany on , , the same year he was nominated by the Whig Party as Washington County, Wisconsin, District Attorney. He was also the founder of the newspaper in Washington County now known as the Washington Herald.

In 1852, having lost his law library and other property by fire, he moved to California during the and began mining for gold at Michigan Bluff in . He subsequently went into business with his three brothers, who had preceded him to the Pacific coast. During this time he worked with his brothers as keeper of a general store for miners, served as a and helped organize the Sacramento Library Association, which later became the Sacramento Public Library. In 1856 he moved to and engaged in mercantile pursuits on a large scale.

As one of "" railroad magnates, he cofounded and was made president of the company in 1861, when he was again nominated to run for Governor of California

As president of the Central Pacific, he directed its construction over the mountains, building 530 miles in 293 days. As head of the railroad company which built the first transcontinental railway line over the Sierra Nevada, Stanford hammered in the famous in on , . In 1870, the Central Pacific Railroad acquired the Southern Pacific Railroad, forming one of the most powerful railroad monopolies in history.

In 1871, Stanford began experimenting with winemaking, leading to his establishment of his 'Vina' winery.

In 1872 Stanford commissioned to use newly invented photographic technology to establish whether a galloping horse ever has all four feet off the ground simultaneously, which they do. This project, which illustrated motion through a series of still images viewed together, was a forerunner of technology.

Stanford moved to San Francisco in 1874, where he assumed presidency of the .

Stanford served as president of from 1885 to 1890, [cite book|author=Yenne, Bill|title=The History of the Southern Pacific|publisher=Bison Books Corp.|id=ISBN 0-517-46084-X| ] [cite web|url=http://www.uprr.com/aboutup/history/histequp/business.shtml|author=|title=Historical Equipment Still in Use: The Stanford|accessdate=2006-05-30| ] while continuing to serve as the head of the Central Pacific Railroad until his death in 1893. As a railroad developer, Stanford encouraged Chinese to find workers for the railroad construction. However, when jobs were scarce, Stanford made them . Stanford encouraged the legislature to pass taxes and unfair regulations which specifically targeted Chinese.

He also owned two wineries, the Leland Stanford Winery, founded in 1869, and run by brother Josiah, and the 55,000 acres (220 km²) Great Vina farm in Tehama County, containing what was then the largest vineyard in the world at 13,400 acres (54 km²), the Gridley tract of 22,000 acres (90 km²) in Butte County and the Palo Alto Stock Farm, which was the home of his famous thoroughbred racers, Electioneer, Anon, Sunol, Palo Alto and Advertiser. The breeding farm gave its nickname of "The Farm". The Stanfords also owned a stately mansion in (this was the birthplace of their only son, and now a house museum used for California state social occasions), as well as a home in 's district. Their Sacramento home is now the .

Stanford, a leading member of the Republican Party, was politically active. In 1856, he met with other Whig politicians in Sacramento to organize the at its first state convention on April 30. He was chosen as a delegate to the Republican Party convention which selected US presidential electors in both 1856 and 1860. In the interim, he became the majority stockholder in Amador Quartz Mine. Stanford was defeated in his 1857 bid for California State Treasurer, and his 1859 bid for the office of Governor of California.

He was the eighth Governor of California, serving from December 1861 to December 1863, and the first Republican governor. During his gubernatorial tenure, he cut the state's debt in half, and advocated for the conservation of forests. He also oversaw the establishment of the California's first state in San José, later to become . Following Stanford's governorship, the term of office changed from two years to four years, in line with legislation passed during his time in office. He later served slightly more than one term in the , from 1885 until his death in 1893 at age 69. He served for four years as Chairman of the , and his legislative focus included core Populist elementsndash worker as a solution to labor conflict, and to enhance economic growth.

With wife Jane, Stanford founded Leland Stanford Junior University as a memorial for their only child, , who died as a teenager of in while on a trip to Europe. Approximately US$20 million (US$400 million in 2005 dollars) initially went into the university, which held its opening exercises October 1, 1891. The wealth of the Stanford family during the late nineteenth century is estimated at approximately US$50 million ($US1 billion in 2005 dollars).

Leland Stanford died at home in on June 20, 1893, and is buried in the Stanford family mausoleum on the Stanford campus. The Memorial Church at Stanford University is also dedicated to his memory.

California Governor and First Lady announced on , , that Stanford will be inducted into the , located at . The induction ceremony will take place and Stanford family descendant, Tom Stanford will accept the honor in his place. [cite news|url=http://www.sacbee.com/102/story/971294.html|title=New California Hall of Fame class includes Fonda, Nicholson|work=Sacramento Bee|date=|accessdate=2008-05-28|author=Dancis, Bruce| ]