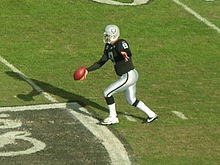 Shane Lechler of the Oakland Raiders punts the ball in November 2008.

A punter (P) in American or Canadian football is a special teams player who receives the snapped ball directly from the line of scrimmage and then punts (kicks) the football to the opposing team so as to limit any field position advantage. This generally happens on a fourth down in American football and a third down in the Canadian version. Punters may also occasionally take part in fake punts in those same situations, when they throw or run the football instead of punting.

A punter must be skilled in angling the football and/or kicking it as high as possible (called "hangtime") to maximize his teammates’ ability to eliminate a punt returner's forward progress. Also, the punter will try to make the ball spin in an unusual manner making it harder to catch, which could result in a muff and potentially lead to the punter's team gaining possession.

Punters are rarely well known or recognized by fans, but play a major role in winning the field position battle. Today, punters have increasingly begun to pull double duty as the holder on field goal attempts and also being used on kickoffs. One of the main reasons why punters are starting to take over the holder position is that the backup quarterback is usually busy with the rest of the offense and has little time to devote to holding. The long snapper for field goals is usually the punt snapper as well, so the punter already has developed a chemistry with the snapper and is used to catching a long-snapped ball.

Punters are also kickers and understand kicking mechanics better, such as knowing how far back to lean the ball and better judging whether to abort a field goal attempt. Punters are usually on their own during team practices, allowing them the time to work with the kicker, so the punter and placekicker tend to develop a close rapport. Many punters also double duty as kickoff specialists as most punters have been at one point field goal kickers as well and some, such as Craig Hentrich, have filled in as worthy backup field goal kickers.

A coffin corner refers to the corner of the playing field just in front of the end zone, usually from the 5-yard line to the goal line. A perfect coffin corner kick is one that goes out of bounds just before either orange pylon located in the front of the end zone. The punter tries to place the ball so that it lands out of bounds or is downed on the field by another member of the kicking team anywhere inside the 5-yard line without touching the goal line, thus forcing difficult field position for the receiving team on their next scrimmage.

The name arises by extension from the coffin corner found in Victorian houses, for if the kick is slightly too far into the end zone or if a member of the kicking team touches the goal line while maintaining possession of the ball, a touchback is awarded, losing the advantage that comes with a successful execution of the kick. If the ball goes out of bounds too far upfield, the receiving team will usually have more options on offense, such as being able to drop back for a pass without fear of possibly giving up a safety. More often than not, a kicker's attempt to land the ball accurately within the coffin corner fails, as the amount of skill required to angle a kick inside such a small area is extraordinary.[1]

Although most punters have relatively short playing careers some can have exceptionally long careers, compared to other NFL position players (there is a similar phenomenon with kickers). One reason for this is that their limited time on the field and heavy protection by penalties against defensive players for late hits makes them far less likely to be injured than other positions. Sean Landeta, for instance, played 19 NFL seasons and three USFL seasons for eight different teams. Jeff Feagles of the New York Giants played 22 seasons as a punter.

Lately, teams have been turning to retired Australian rules football players to punt for them, as the proper way to score in the sport is by punting the ball through the goal posts. Darren Bennett, who played for the San Diego Chargers and Minnesota Vikings in his career, was one of the first successful AFL players to make the jump to America. Ben Graham, who entered the league with the New York Jets, became the first AFL player to play in a Super Bowl when he played in Super Bowl XLIII with his current team, the Arizona Cardinals. Graham, Mat McBriar of the Dallas Cowboys, and Sav Rocca of the Philadelphia Eagles are currently the only (as of Week 3 of the 2010 season) Australians on NFL rosters as punters.

Bob Cameron of the Winnipeg Blue Bombers (CFL), in a 23-year career, has the most career punting yards, with 134,301 yards.

Jeff Feagles has the NFL all time career punting yards with 71,211 yards. He played from 1988-2009 for five different teams in the NFL.

Former Oakland Raiders player Ray Guy is the only pure punter to be picked in the first round of the NFL Draft. Russell Erxleben was selected as the 11th pick in the first round of the 1979 draft by the New Orleans Saints as a punter but also performed kicking duties as well. Guy is credited with raising the status of punters in the NFL because he proved to be a major ingredient in the Raiders' success during the 1970s by preventing opponents from gaining field position advantage.