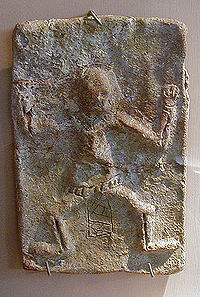 A brick from Comalcalco. The carved sides of bricks faced inward, and were not visible.

Comalcalco is both a modern-day city located in Comalcalco Municipality about 45 miles (60 km) northwest of Villahermosa in the Mexican state of Tabasco and a Pre-Columbian Maya archaeological site. The literal English translation of "Comalcalco" is "In the house of the comals". A comal is a pan used to prepare tortillas.

The present-day city of Comalcalco reported a 2005 census population of 39,865 inhabitants, while the municipality of which it serves as municipal seat had a population of 173,773. The city is the third-largest community in the state of Tabasco, behind Villahermosa and Cárdenas. The municipality, which has an area of 723.19 km² (279.225 sq mi), includes many smaller outlying communities, the largest of which are Tecolutilla, Chichicapa, Aldama, and Miguel Hidalgo.

The site of Comalcalco, whose coordinates are 18°16′N 93°10′W, is notable for two characteristics. First, it is the westernmost known Maya settlement. Second, and due to a dearth of locally available limestone (the primary material used in architectural construction), the city's buildings were made from fired-clay bricks held together with mortar made from oyster shells. The use of bricks at Comalcalco was unique among Maya sites, and many of them are decorated with iconography and/or hieroglyphs. Important architectural features include the northern plaza and two pyramids, the Gran Acropolis and the Acropolis Este.

Comalcalco has fertile soil. Large amounts of tropical products are grown. Corn and beans and vegetables are also cultivated. Cocoa is the largest harvest in Comalcalco. Comalcalco produces 20% of the cocoa harvested in the state of Tabasco. Also coconut, avocado, and some tropical fruits are important in some zones. Livestock raising, even though it is not widely practiced, is of high quality, most ranchers have their farms just sideout of Comalcalco, away from urban development.

Petroleum is also extracted. Comalcalco produces 5% of the total pulled petroleum in the state of Tabasco. 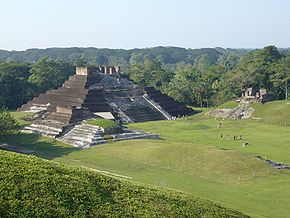 The pyramids of Comalcalco

When the River Mezacalapa was drying up, it was called River “Seco” (dry). In the middle of the riverbed is located an elevation in which some families were living various in small ranches. There were a reasonable number of inhabitants living together. So the Government of the State of Tabasco made the decision to establish a town there, on October 1820. The town received the name of “San Isidro de Comalcalco”. This decree was signed by Juan Mariano Sale, Antonio Solana and Fausto Gordillo, all members of the congress. The decree was published by Don Marcelino Margalli, governor of the state and Jose Mariano Troncoso, secretary of the state. The town is located in Comalcalco municipality. On November 14 of 1834 was created the first government of Colmalcalco.