Committees of the Scottish Parliament

Committees of the Scottish Parliament 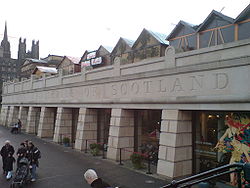 Private Bill Committees are set up to deal with the legislation required for major public sector infrastructure projects - such as the underground extensions to the National Gallery of Scotland in 2003.

The Scottish Parliament has a number of committees, with small numbers of Members appointed to deal with particular topics or issues.

The principal role of committees in the Scottish Parliament is to conduct inquiries, scrutinise legislation and hold the government to account.[2] Committee meetings take place in the Parliament's committee rooms all day Tuesday and Wednesday morning when Parliament is sitting. Committees can also meet at other locations throughout Scotland.[3]

Membership of the committees reflects the balance of parties across Parliament.[2] There are different types of committee, with their functions set out in different ways.

The membership of the committees in August 2011 is shown below. All committees also have substitute members (not shown).

The remit of the committee, as published by the Parliament, is to consider and report on:

On 16 June 2009 the Committee reported on its 'Inquiry into the public petitions process'[4] issued to reflect 10 years of operation, which included an evaluation of the pioneering e-Petitioner online petitioning system.

A further type of committee is normally set up to scrutinise private bills submitted to the Scottish Parliament by an outside party or promoter who is not a member of the Scottish Parliament or Scottish Government. Private bills normally relate to large-scale development projects such as infrastructure projects that require the use of land or property.[6] Private Bill Committees have been set up to consider legislation on issues such as the development of the Edinburgh Tram Network, the Glasgow Airport Rail Link, the Airdrie-Bathgate Rail Link and extensions to the National Gallery of Scotland.[7]