"The Doomsday Machine" is a second-season episode of Star Trek: The Original Series. It is episode #35, production #35, and was first broadcast on October 20, 1967. It was repeated on April 19, 1968. It was written by Norman Spinrad, and directed by Marc Daniels.

Overview: The starships Enterprise and the damaged USS Constellation must work together to stop an alien planet-killing machine going any further.

On stardate 4202.9, the USS Enterprise responds to a distress call and finds that several planets in a nearby system have been destroyed. They soon find their sister ship, the USS Constellation, adrift and heavily damaged. Captain Kirk and a damage control team beam over to investigate and find the ship's commanding officer, Commodore Matthew Decker, half-conscious in the auxiliary control room – the sole survivor. Mr. Scott reports that the ship's warp engines are damaged beyond repair and the weapons exhausted. Meanwhile, an incoherent Decker can only mutter about something attacking his ship.

The logs reveal that the ship investigated the breakup of a planet and was soon attacked by an enormous machine with a conical shell miles in length and a giant opening at one end filled with sparkling energy. After the attack, Decker ordered his surviving crew to the surface of a nearby planet, but to his horror, the machine destroyed that world next. Spock theorizes the machine breaks down planets into rubble which it then consumes for fuel and adds that given its past trajectory, it is likely to have come from outside the galaxy and continue towards the "most densely populated region of our galaxy".

Kirk theorizes that they have encountered a doomsday machine, a device built to destroy both sides in a war. It was intended as a bluff or deterrent, not to be actually used, but was activated nonetheless. It wiped out its builders long ago but it lives on indefinitely, fueled by the very planets it destroys.

Kirk has Decker beamed to the Enterprise while he and Scott remain on the derelict. On the Enterprise bridge, Mr. Spock is alerted to the approach of the alien machine which generates interference that makes radio contact with Starfleet Command impossible. As the machine attacks, Decker comes to the bridge, and quoting Starfleet regulations he pulls rank on Spock and assumes command. He then orders a full-on attack against the machine ignoring Spock's warning that the ship's weaponry is ineffective against the doomsday machine's pure neutronium hull. As a result, the warp engines are disabled and the Enterprise becomes drawn by a tractor beam towards the machine's glowing maw.

Aboard the Constellation, Scott has managed to restore partial phaser and thrust control, and Kirk creates a diversion to distract the planet-killer away from the Enterprise. As the machine veers off, Kirk personally orders Spock to relieve Decker of command, as Decker is clearly in no condition to give orders. Eventually, Decker, recognizing that the Enterprise crew would support Spock without question, yields and is escorted off the bridge by security. However, he knocks out his guard and quickly heads to the hangar bay to steal a shuttlecraft. He then pilots it on a kamikaze course into the planet killer's maw despite the pleas of Kirk and Spock to turn back.

Kirk learns that the shuttlecraft's subsequent explosion slightly decreased the planet killer's output power. He realizes Decker may have had the right idea but not enough energy to succeed. Kirk has Spock determine if the thermonuclear detonation of the Constellation impulse engines inside the planet-killer would destroy it. Spock is unsure, and he and Scotty object to Kirk's intention to remain on the Constellation to carry it out. Kirk has Scotty rig a manual 30-second detonation timer, planning to start it and beam back to the Enterprise before detonation. Scotty explains that once the timer is started, it cannot be stopped.

With everything prepared, Kirk orders the others back to the Enterprise and steers the Constellation toward the planet killer's maw. At the right moment he starts the 30-second timer and asks to be beamed out. In classic cliffhanger fashion, the damaged Enterprise transporter shorts out. Kirk is stranded on the Constellation. Scott rushes to make repairs. As the timer ticks toward zero, First Officer Spock suggests to Scotty to try "Inverse Phasing", Kirk issues an understated request: "Gentlemen, I suggest you beam me aboard" and watches the doomsday machine grow on the viewscreen. Scott's desperate fix succeeds and Kirk is beamed off the Constellation at the very last second. The Constellation enters the maw and explodes, destroying the planet killer's mechanism and leaving its indestructible shell adrift, dead in space.

In the epilogue, Kirk and Spock muse about the parallels between their doomsday machine and the "doomsday machines" of late 20th century Earth, nuclear weapons. Kirk notes with irony that the Constellation's impulse engines exploded in the same way, though this time it served a constructive purpose.

This is one of the few Star Trek episodes for which original music was written; in this case a full score, by Sol Kaplan. Writer James Lileks notes that the music cues for this episode are "intended to belong together, and that’s one of the reasons the episode works like few others: it has a unique symphonic score. Played start to finish, it holds together."[2] Jeff Bond notes, "Although he wrote only two scores for the series, New York composer Sol Kaplan's music was tracked endlessly throughout the show's first two seasons."[3] Both Lileks and Bond point out similarities between this music and John Williams's award-winning score for Jaws a decade later. The music for this episode was collected, along with the score for "Amok Time", on the second release from Crescendo Records of music from the series: the first release other than the music from the pilot episodes. 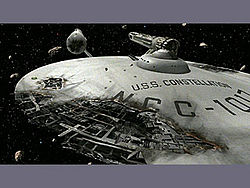 This episode was remastered in 2006 and first aired February 10, 2007 as part of the remastered Original Series. It was preceded a week earlier by "Journey to Babel" and followed a week later by "Amok Time". Aside from remastered video and audio, and the all-CGI animation of the USS Enterprise that is standard among the revisions, specific changes to this episode also include:

Remake of the Episode

Zack Handlen of The A.V. Club gave the episode an 'A' rating, describing the episode as "very strong stuff" noting effective tension building and the development of Decker's character. Handlen also noted Sol Kaplan's score which "matches the actors' intensity".[4]

The first "monster" scenario in the tabletop wargame Star Fleet Battles, titled "The Planet Crusher: The Creature that ate Sheboygan III," is based on the planet killer in this episode.

In the Peter David novel Vendetta it is noted that the theory that the Doomsday Machine originated in another galaxy does not work given the huge amount of fuel required to power the machine. An alternative is presented, theorizing that the device is an early prototype of a machine designed by an advanced race to counter the Borg. The novel further speculates that because it was a prototype, it was never intended for use but was activated when its creators saw their defeat looming. A second, 'completed version' of the same machine appears in the novel, this one piloted by a living being who was interfaced with a form of AI based on the minds of its creators. The original Doomsday Machine is reactivated in David's book Before Dishonor, and is piloted by Seven of Nine against a Borg Cube threatening Earth.

The library computer entry on the Planet Killer in the CD-ROM game Star Trek: Star Fleet Academy mentions a school of thought suggesting that the galactic energy barrier may have been constructed ages ago to keep such planet killers out of the galaxy.

In addition, other CD-ROM games such as Star Trek: Starfleet Command feature the planet killer as an antagonist.

The Doomsday Machine is featured as the boss at the end of the Star Trek: 25th Anniversary.

The concept was used in the FASA Star Trek module "A Doomsday Like Any Other" where the players in the role of USS Fife crew members encounter another Doomsday machine.

Star Trek Concordance and The Monsters of Star Trek refer to the device as a "berserker" suggesting an inspiration from Fred Saberhagen's creations.[citation needed]

In some Star Trek media, notably comic books,[which?] Commodore Decker is portrayed as one of Captain Kirk's mentors and teachers at Starfleet Academy, providing a backstory for their relationship and deepening it.

In the Star Trek: Phase II fan made episode "In Harm's Way", both Commodore Decker and the planet killer(s) are featured.