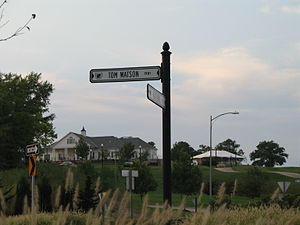 It overlaps Route 273 until just south of Weston, Missouri where 273 breaks off to head east.

At Beverly, Missouri, in what is referred to locally as the "Beverly Curve", it intersects Route 92 going east to Platte City, Missouri and west to Leavenworth, Kansas.

About three miles (5 km) later at East Leavenworth, Missouri, Route 45 intersects its spur which goes northwest to Leavenworth. The spur, which is signed as "Route 45" and also known as the "Leavenworth cutoff", was built as a shortcut from Leavenworth, Kansas to Kansas City during the construction of the Centennial Bridge (Leavenworth, Kansas). Even though it is in Missouri it is maintained by the city of Leavenworth.

South of Farley, Missouri, the road leaves the Missouri River bottoms and heads southeast past Interstate 435. The section between Interstate 435 and Interstate 29 that passes the National Golf Club of Kansas City is named the Tom Watson Parkway after the Kansas City native champion golfer who also designed the club's course.

At the intersection with Route 9, the road widens to become a four-lane concrete avenue. The road's southern terminal point is Interstate 29.

The road, which is almost exclusively rural until entering Kansas City suburban development east of I-435, is frequently listed as a "scenic route" as it stays close to the Missouri River bluffs and has commanding views of Fort Leavenworth.