The Forest of Compiègne (French: Forêt de Compiègne) is a large forest in the region of Picardie, France, near the city of Compiègne and approximately 37 miles (60 km) north of Paris.[1]

The forest of Compiègne is roughly circular with a diameter of about 9 miles (14 km);[2] it is approximately 58 miles (93 km) in circumference[3] and its area is roughly 14,414 hectares (35,620 acres),[4] making it the third largest forêt domaniale, a category corresponding to the French State's inalienable domaine, as heir to the monarchy, under a judicial regime distinct from the national patrimoine and from private property, defined by a royal edict issued in 1566.[5]

The forest is lushly irrigated, being adjacent to the Oise and the Aisne rivers, as well as many smaller tributaries and streams.[6]:749

On its northwest, the forest hugs its small namesake city, and to its north and northeast, beyond the Aisne, lies the large national forest of Laigue (Forêt Domaniale de Laigue). Around its remaining perimeter, it contains or is adjacent to numerous communes including Vieux-Moulin, Lacroix-Saint-Ouen, Saint-Sauveur, Béthisy-Saint-Pierre, Saint-Jean-aux-Bois, and Pierrefonds.[7] On its south it borders the Forest of Halatte.

Just outside the city of Compiègne, a grand entrance to the forest begins at the resplendent Château de Compiègne, a former royal residence on the city's western edge. Stretching forward from the château, the Avenue de Beaux Monts scales the heights of the same name, providing a scenic promenade into the woods.[8]:101 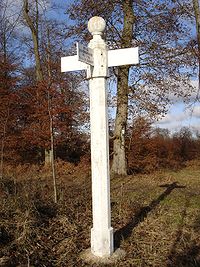 Signpost in the Compiègne forest

The forest of Compiègne is famous for its picturesque natural attractions, with its elegant arrays of oak and beech trees projecting a "noble and ordered beauty".[6]:749

The most prominent tree species are oak (Quercus robur), beech (Fagus sylvatica) and hornbeam (Carpinus betulus).[9][10]:776 Much of the oak was heavily harvested over the centuries but was replanted aggressively in the nineteenth century when fears of deforestation began to be addressed.[11] Since the late twentieth century, the North American black cherry tree (Prunus serotina) has spread vigorously throughout the forest, eliciting mixed reactions from local arborists.[12]

Numerous flowering plants thrive in the woods,[6]:749 notably large numbers of Lily of the Valley (Convallaria majalis).[13]:92 Small lakes, ponds, brooks and springs abound throughout the forest,[6]:749 including the Spring of Saint-Sauveur,[14]:131 which is actually a pair of therapeutic mineral water springs running both hot and cold.[15]

The forest sustains a great number of game animals including deer, rabbit and wild boar,[16] and the varied terrain - plateaus cut by valleys and gorges, hills, streams and ponds - makes for challenging hunting. For centuries the Compiègne forest has been a prized hunting ground for virtually all the kings of France.[8]:101 Some 350 roads and pathways cross it[3] adding up to over six hundred miles of trail[16] with stately vintage signposts marking most of the intersections.[2] The oldest ones include a small red mark which shows the direction to the château, relics of an imperial order given during the Second French Empire after the Empress Eugénie found herself lost in the thick woods.[2]

The forest of Compiègne is a popular destination for all types of tourists. Horse-riders and bicyclists particularly enjoy the forest;[1] a long-running bicycle event, the Paris-Lille race,[17] has an established path through the forest.[18] 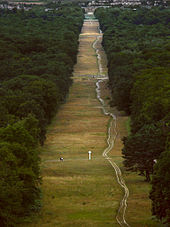 Avenue de Beaux Monts, the promenade into the forest from the Château de Compiègne

The forest of Compiègne area shows evidence of prehistoric habitation,[19] and continuous forest cover has been definitively proven since at least the end of the Roman Empire.[20] Gallic-Roman edifices have been discovered there, and it is traversed on its south and east sides by an ancient Roman road[19] now called by the French the Chaussée Brunehaut.[21] During the Gallic Wars, Julius Caesar won a decisive victory in the forest, defeating one of the larger tribes of north-eastern Gaul, the Bellovaci.[22] A multitude of the forest's classical-era artifacts are on display at the Château's museum.[23]

The earliest Frankish kings established the forest as their privileged hunting grounds,[21]:356 and Clothaire the Great built the first royal residence there in the 7th century,[21]:357-358 and there he died of a fever.[24] The small palace, fitted cozily among the trees, was named Cusia and for some time thereafter the forest itself went by the name Forêt de Cuise[21]:357-358 that is memorialized in the village of Cuise-la-Motte that lies to the east of the forest boundaries. A battle between the Merovingian-era kingdoms of Austrasia and Neustria took place in the forest in the year 715.[21]:358 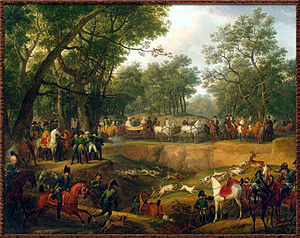 Most French monarchs enjoyed extravagant hunts at Compiègne. This 1811 oil painting by Carle Vernet depicts the Emperor Napoleon I at his sport.

As Empress Eugénie's signposts attest, the thick and heavy forest can be a disorienting and potentially fatal place. In the twelfth century, at the age of fourteen, the future King Philip II of France found himself lost in the forest: he came so close to tragedy that his father, Louis VII, felt compelled to make a pilgrimage to the shrine of St. Thomas of Canterbury in England to offer thanks for his recovery.[8]:98 In the sixteenth century, King Francis I commanded the construction of eight hard-surfaced roads through the forest, all of which converge on a single point called the King's Well (Puits du Roi).[21]:358

Further avenues connected by an octagonal ring were opened through the woods for the formal hunting parties of Louis XIV, and under the Ancien Régime the number of rides was increased to 200. Napoleon opened the avenue of Beaux-Monts (illustration).[25] Prior to the Industrial Revolution, the lush woodlands provided lumber for a thriving woodworking community around Compiègne.[26] One of the most popular products supplied by the forest was beech oil, used for cooking and folk medicines: it was bottled in prodigious quantities and sold worldwide from Compiègne through the 19th century, until its marketshare was supplanted by newer, more refined oils.[27]

The forest of Compiègne witnessed much activity during the reign of the Emperor Napoleon III, for whom the abundant forest was a personal favorite retreat.[28] The Emperor was an avid huntsman, and he reconstituted the forest as grand hunting grounds, even going so far as to revive the age-old office of Grand Veneur to oversee it.[29] The Emperor had a deep affection for the for the forest and frequently organized his hunting parties at the King's Well.[30]:321 In addition to hunting parties and competitions, the forest of Compiègne was the scene of extravagant receptions, parties and even theatrical performances.[19]

The forest of Compiègne was the site of the Armistice between the Allies and Germany which ended World War I on 11 November 1918.[31] The French commander-in-chief Marshal Foch convened the armistice talks deep in the forest beside the tiny village of Rethondes,[32]:261 with an eye towards secrecy because he wanted to shield the meeting from intrusive journalists,[33] as well as spare the German delegation any hostile demonstrations by French locals.[34]

During World War II, a second treaty was signed in the forest, this time arranging an armistice between France and Nazi Germany (22 June 1940).[35] With an unmistakable desire to humiliate his defeated enemy,[34] German dictator Adolf Hitler gave orders that the surrender should be received in exactly the same spot, even the same railway car, where the Germans had surrendered in 1918.[34]

Main article: Glade of the Armistice 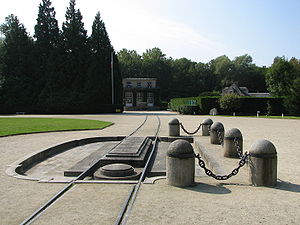 A memorial slab marks the location of the original railcar at Armistice Clearing.

A memorial site called Clairière de l'Armistice ("Glade of the Armistice", or "Armistice Clearing") covers the historic treaty area. Additions include a statue of Marshal Foch and the large Alsace-Lorraine Memorial, which depicts an Allied sword pinning down an Imperial German eagle. A famous memorial tablet placed at the precise location of the cease-fire signing reads (in French), Here on the eleventh of November 1918 succumbed the criminal pride of the German Reich... vanquished by the free peoples which it tried to enslave.[36]:50 The original tablet was destroyed by the Nazis, but a new one was emplaced after the war.[37]

For the 1918 meeting, the French had specifically assembled the train with a special railcar which had once belonged to Napoleon III. The car was decorated with old Imperial emblems, redolent of past glories and mutely confirming the resurgence of French power after its defeat in the Franco-Prussian War.[33] After the armistice of 1940, however, the railcar was remanded to Germany where it was eventually destroyed sometime before the end of the war.[16] In 1950, a faithful replica of the original railcar was installed at the site.[38] The railway carriage itself was taken to Crawinkel in Thuringia in 1945, where it was destroyed by SS troops and the remains buried. Decades later, some vestiges of the original car were discovered in Germany and returned to France: the pieces were added to the memorial display in 1995.[38]

The Armistice Clearing remains open to the public six days a week.[38] Visitors routinely leave photographs and other mementos to be displayed or stored in the museum, making it "an ever-changing place of pilgrimage".[16]