Computer assisted surgery (CAS) represents a surgical concept and set of methods, that use computer technology for presurgical planning, and for guiding or performing surgical interventions. CAS is also known as computer aided surgery, computer assisted intervention, image guided surgery and surgical navigation, but these terms that are more or less synonyms with CAS. CAS has been a lead in factor for the development of robotic surgery. 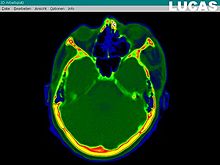 Creating a virtual image of the patient

The most important component for CAS is the development of an accurate model of the patient. This can be conducted through a number of medical imaging technologies including CT, MRI, x-rays, ultrasound plus many more. For the generation of this model, the anatomical region to be operated has to be scanned and uploaded into the computer system. It is possible to employ a number of scanning methods, with the datasets combined through data fusion techniques. The final objective is the creation of a 3D dataset that reproduces the exact geometrical situation of the normal and pathological tissues and structures of that region. Of the available scanning methods, the CT is preferred,[1] because MRI data sets are known to have volumetric deformations that may lead to inaccuracies. An example data set can include the collection of data compiled with 180 CT slices, that are 1 mm apart, each having 512 by 512 pixels. The contrasts of the 3D dataset (with its tens of millions of pixels) provide the detail of soft vs hard tissue structures, and thus allow a computer to differentiate, and visually separate for a human, the different tissues and structures. The image data taken from a patient will often include intentional landmark features, in order to be able to later realign the virtual dataset against the actual patient during surgery. See patient registration.

Image analysis involves the manipulation of the patients 3D model to extract relevant information from the data. Using the differing contrast levels of the different tissues within the imagery, as examples, a model can be changed to show just hard structures such as bone, or view the flow of arteries and veins through the brain.

Using specialized software, such as OsiriX, the gathered dataset can be rendered as a virtual 3D model of the patient, this model can be easily manipulated by a surgeon to provide views from any angle and at any depth within the volume. Thus the surgeon can better assess the case and establish a more accurate diagnostic. Furthermore, the surgical intervention will be planned and simulated virtually, before actual surgery takes place. Using dedicated software, the surgical robot will be programmed to carry out the pre-planned actions during the actual surgical intervention.

In computer assisted surgery, the actual intervention is defined as surgical navigation. This consists of the correlated actions of the surgeon and the surgical robot (that has been programmed to carry out certain actions during the preoperative planning procedure). A surgical robot is a mechanical device (generally looking like a robotic arm) that is computer controlled. Robotic surgery can be divided into three types, depending on the degree of surgeon interaction during the procedure: supervisory-controlled, telesurgical, and shared-control.[2] In a supervisory-controlled system, the procedure is executed solely by the robot, which will perform the pre-programmed actions. A telesurgical system, also known as remote surgery, requires the surgeon to manipulate the robotic arms during the procedure rather than allowing the robotic arms to work from a predetermined program. With shared-control systems, the surgeon carries out the procedure with the use of a robot that offers steady-hand manipulations of the instrument. In most robots, the working mode can be chosen for each separate intervention, depending on the surgical complexity and the particularities of the case.

Computer assisted surgery is the beginning of a revolution in surgery. It already makes a great difference in high precision surgical domains, but it is also used in standard surgical procedures.

Telemanipulators have been used for the first time in neurosurgery, in the 1980s. This allowed a greater development in brain microsurgery (compensating surgeon’s physiological tremor by 10-fold), increased accuracy and precision of the intervention. It also opened a new gate to minimally invasive brain surgery, furthermore reducing the risk of post-surgical morbidity by accidentally damaging adjacent centers.

Bone segment navigation is the modern surgical approach in orthognathic surgery (correction of the anomalies of the jaws and skull), in temporo-mandibular joint (TMJ) surgery, or in the reconstruction of the mid-face and orbit.[3]

Robotic surgery fits most of the surgeon’s needs in areas with limited surgical access and requiring high-precision actions, such as middle-ear surgery.[4]

The application of robotic surgery is widespread in orthopedics, especially in routine interventions, like total hip replacement.[5] It is also useful in pre-planning and guiding the correct anatomical position of displaced bone fragments in fractures, allowing a good fixation by osteosynthesis. Early CAOS systems include the HipNav, OrthoPilot, and Praxim.

With the advent of Computer assisted surgery, great progresses have been made in general surgery towards minimal invasive approaches. Laparoscopy in abdominal and gynecologic surgery is one of the beneficiaries, allowing surgical robots to perform routine operations, like colecystectomies, or even hysterectomies. In cardiac surgery, shared control systems can perform mitral valve replacement or ventricular pacing by small thoracotomies. In urology, surgical robots contributed in laparoscopic approaches for pyeloplasty or nephrectomy or prostatic interventions.[6][7]

Radiosurgery is also incorporating advanced robotic systems. CyberKnife is such a system that has a lightweight linear accelerator mounted on the robotic arm. It is guided towards tumor processes, using the skeletal structures as a reference system (Stereotactic Radiosurgery System). During the procedure, real time X-ray is used to accurately position the device before delivering radiation beam.

CAS starts with the premise of a much better visualization of the operative field, thus allowing a more accurate preoperative diagnostic and a well-defined surgical planning, by using surgical planning in a preoperative virtual environment. This way, the surgeon can easily assess most of the surgical difficulties and risks and have a clear idea about how to optimize the surgical approach and decrease surgical morbidity.cience of designing user interaction with equipment and work places to fit the user. During the operation, the computer guidance improves the geometrical accuracy of the surgical gestures and also reduce the redundancy of the surgeon’s acts. This significantly improves ergonomy in the operating theatre, decreases the risk of surgical errors and reduces the operating time.

From 1989 to 2007, more than 200 CAS systems have been developed by different universities and research institutes, almost all remaining experimental devices. Currently, the most widely-used commercially-available systems approved for clinical use are StealthStation (Medtronic, USA), eNLight and NavSuite (Stryker Corporation, USA), VectorVision (Brainlab, Germany), and DigiPointeur (Dr Lombard / Ste COLLIN, France). All of these except DigiPointeur use an optical IR tracking system. DigiPointeur uses an electromagnetic tracking system. StealthStation uses both an electromagnetic (AxiEM) and an optical IR tracking system. The first surgical robot was called Aesop (Computer Motion, USA); Aesop 1000 received the U.S. Food and Drug Administration (FDA) approval in 1993. It had multiple improvements and variants, such as Zeus or Hermes. The daVinci Surgical System was developed by Intuitive Surgical, derived from the Stanford Research Institute, USA. In 1997 it had received the FDA approval to assist the surgeon, and was the first Remote manipulator to have the FDA approval to perform stand-alone surgery, in 2000. It is a telesurgical system, mostly used for laparoscopic abdominal surgery. After harsh disputes and trials, the two producers merged, still under the brand name of Intuitive Surgical. Orthodoc and Robodoc are robots developed for assistance in orthopedic surgery, developed by Integrated Surgical Systems. The same company has produced Neuromate, to be used in conjunction with Orthodoc/Robodoc in neurosurgery. CyberKnife (Accuray Incorporated) is a robot that incorporates a linear accelerator, and is used since 2001 in radiosurgery.

New and developing technologies in the medical/surgical field, and furthermore experimental devices might rise new and unforeseen risks for the patient and/or the surgical team. Ethical committees of the medical institutions have to analyze the ethical issues involved for each and every new developed device or technology. Furthermore, the high costs of the initial development of such technologies, that can be covered mostly by major hospitals, might rise questions about providing equal access to medical care for the patients.