In physics, work is a scalar quantity that can be described as the product of a force times the distance through which it acts, and it is called the work of the force. Only the component of a force in the direction of the movement of its point of application does work. The term work was first coined in 1826 by the French mathematician Gaspard-Gustave Coriolis.[1][2]

If a constant force of magnitude F acts on a point that moves s in the direction of the force, then the work W done by this force is calculated W=Fs. In particular, a force of 10 newtons (F=10N) acting along the path of 2 metres (s=2m) will do the work W=(10N)(2m)=20Nm=20J, where joule (J) is the SI unit for work (derived in order to replace the product Nm).

At any instant, the rate of the work done by a force is the scalar product of the force with the velocity vector of the point of application. This scalar product of force and velocity is called instantaneous power, and work is the time integral of instantaneous power along the trajectory of the point of application. Because changes in this trajectory will change the calculation of work, work is said to be path dependent.

The first law of thermodynamics states that when work is done to a system its energy state changes by the same amount. This equates work and energy. In the case of rigid bodies, Newton's laws can be used to derive a similar relationship called the work-energy theorem.

A baseball pitcher does positive work on the ball by transferring energy into it.

The SI unit of work is the joule (J), which is defined as the work done by a force of one newton acting over a distance of one metre. This definition is based on Sadi Carnot's 1824 definition of work as "weight lifted through a height", which is based on the fact that early steam engines were principally used to lift buckets of water, through a gravitational height, out of flooded ore mines. The dimensionally equivalent newton-metre (N·m) is sometimes used for work, but this can be confused with the units newton-metre of torque.

Non-SI units of work include the erg, the foot-pound, the foot-poundal, and the litre-atmosphere. Other non-SI units for work are the horsepower-hour, the therm, the BTU and Calorie. It is important to note that heat and work are measured using the same units.

Heat conduction is not considered to be a form of work, since the energy is transferred into atomic vibration rather than a macroscopic displacement. However, heat conduction can perform work by expanding a gas in a cylinder such as in the engine of an automobile.

Calculating the work as "force times straight path segment" can only be done in the simple circumstances described above. If the force is changing, if the body is moving along a curved path, possibly rotating and not necessarily rigid, then only the path of the application point of the force is relevant for the work done, and only the component of the force parallel to the application point velocity is doing work (positive work when in the same direction, and negative when in the opposite direction of the velocity). This component of the force can be described by the scalar quantity called scalar tangential component (

is the angle between the force and the velocity). And then the most general definition of work can be formulated as follows:

Work of a force is the line integral of its scalar tangential component along the path of its application point.

Simpler (intermediate) formulas for work and the transition to the general definition are described in the text below.

If a force F that is constant with respect to time acts on an object while the object is translationally displaced for a displacement vector d, the work done by the force on the object is the dot product of the vectors F and d:[3]

is the angle between the force and the displacement vector.

Whereas the magnitude and direction of the force must remain constant, the object's path may have any shape: the work done is independent of the path and is determined only by the total displacement vector

. A most common example is the work done by gravity – see diagram. The object descends along a curved path, but the work is calculated from

, which gives the familiar result

More generally, if the force causes (or affects) rotation of the body, or if the body is not rigid, displacement of the point to which the force is applied (the application point) must be used to calculate the work. This is also true for the case of variable force (below) where, however, magnitude of

In situations where the force changes over time, equation (1) is not generally applicable. But it is possible to divide the motion into small steps, such that the force is well approximated as being constant for each step, and then to express the overall work as the sum over these steps. This will give an approximate result, which can be improved by further subdivisions into smaller steps (numerical integration). The exact result is obtained as the mathematical limit of this process, leading to the general definition below.

The general definition of mechanical work is given by the following line integral:

is the path or curve traversed by the application point of the force;

is the force vector;

is the position vector; and

is an inexact differential which means that the calculation of

is path-dependent and cannot be differentiated to give

Equation (2) explains how a non-zero force can do zero work. The simplest case is where the force is always perpendicular to the direction of motion, making the integrand always zero. This is what happens during circular motion. However, even if the integrand sometimes takes nonzero values, it can still integrate to zero if it is sometimes negative and sometimes positive.

The possibility of a nonzero force doing zero work illustrates the difference between work and a related quantity, impulse, which is the integral of force over time. Impulse measures change in a body's momentum, a vector quantity sensitive to direction, whereas work considers only the magnitude of the velocity. For instance, as an object in uniform circular motion traverses half of a revolution, its centripetal force does no work, but it transfers a nonzero impulse. 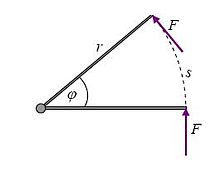 A force of constant magnitude and perpendicular to the lever arm

Work done by a torque can be calculated in a similar manner, as is easily seen when a force of constant magnitude is applied perpendicularly to a lever arm. After extraction of this constant value, the integral in the equation (2) gives the path length of the application point, i.e. the circular arc

, and the work done is

However, the arc length can be calculated from the angle of rotation

(expressed in radians) as

, and the ensuing product

is equal to the torque

applied to the lever arm. Therefore, a constant torque does work as follows:

According to the work-energy theorem, if one or more external forces act upon a rigid object, causing its kinetic energy to change from Ek1 to Ek2, then the work (W) done by the net force is equal to the change in kinetic energy. For translational motion, the theorem can be specified as:[4]

where m is the mass of the object and v is the object's velocity.

The theorem is particularly simple to prove for a constant force acting in the direction of motion along a straight line. For more complex cases, however, it can be claimed that very concept of work is defined in such a way that the work-energy theorem remains valid.

Derivation for a particle

In rigid body dynamics, a formula equating work and the change in kinetic energy of the system is obtained as a first integral of Newton's second law of motion.

To see this, consider a particle P that follows the trajectory X(t) with a force F acting on it. Newton's second law provides a relationship between the force and the acceleration of the particle as

where m is the mass of the particle.

The left side of this equation is the work of the force as it acts on the particle along the trajectory from time t1 to time t2. This can also be written as

This integral is computed along the trajectory X(t) of the particle and is therefore path dependent.

which can be integrated explicitly to obtain the change in kinetic energy,

where the kinetic energy of the particle is defined by the scalar quantity,

The result is the work-energy principle for rigid body dynamics,

This derivation can be generalized to arbitrary rigid body systems.

The work done by a force acting on an object depends on the choice of reference frame because displacements and velocities are dependent on the reference frame in which the observations are being made.[5]

An important class of forces in mechanical systems perform zero work. These are constraint forces that restrict the relative movement of bodies. For example, the centripetal force exerted by a string on a ball a uniform circular motion does zero work because this force is perpendicular to the velocity of the ball. As a result the kinetic energy of the moving ball doesn't change.

Another example is a book at rest on a table, the table does no work on the book despite exerting a force equivalent to mg upwards, because no energy is transferred into or out of the book. On the other hand, if the table moves upward, then it performs work on the book, since the force of the table on the book will be acting through a distance.