Cornwall Council (Cornish: Konsel Kernow) is the unitary authority for Cornwall, in England, United Kingdom. The council, and its predecessor Cornwall County Council, has a tradition of large groups of independents, having been controlled by independents in the 1970s and 1980s. As of the 2009 election, it is run by a Conservative-Independent coalition.

Cornwall Council provides a wide range of services to more than half a million residents, has an annual budget of more than £1 billion and is the biggest employer in Cornwall with a staff of over 22,000.[1][2] It is responsible for schools, social services, rubbish collection, roads, planning and more.

Cornwall's unitary authority, as its bid document endorsed by Parliament states, is a "stepping stone to a Cornish Assembly". It has been suggested that powers and privileges, belonging to the Duchy and Stannaries of Cornwall, could be merged with the unitary authority to achieve this goal.[3] In November 2010, British Prime Minister David Cameron said that his government would "devolve a lot of power to Cornwall - that will go to the Cornish unitary authority."[4] Talks are currently under way between the Deputy Prime Minister Nick Clegg and a cross party group, including the six Cornish MPs, as to how to bring about the devolution of powers to Cornwall.[5]

Various fact finding missions have been organised by councillors to study how other regions and small nations of europe govern themselves successfully. In 2011 Andrew Long of Mebyon Kernow was invited to visit the Estonian Parliament by Aare Heinvee MP of the Reformierakond (Reform Party). He said that it was "a great opportunity to see how a small nation can run its own affairs while being an equal and active part of a wider Europe."[6] Independent councillor Bert Biscoe organised a fact finding mission to Guernsey in 2011 to see if the island's system of government could be adapted to work in Cornwall.[7]

Establishment of the unitary authority

Before April 2009, Cornwall was administered as a non-metropolitan county by the Cornwall County Council with six districts, Caradon, Carrick, Kerrier, North Cornwall, Penwith, and Restormel. The Council of the Isles of Scilly was and remains a separate unitary authority.

On 5 December 2007, the Government confirmed that Cornwall would move to unitary status.[8] This was enacted by statutory instrument as part of the 2009 structural changes to local government in England,[9] The changes took effect on 1 April 2009. On that date the six districts and Cornwall County Council were abolished and were replaced by Cornwall Council.

In March 2009, the leader of Cornwall County Council David Whalley announced he would be standing down as a councillor, complaining of personal attacks against him.[15]

The current logo features a chough and the 15 Cornish golden bezants on a black field as used in the arms of the Duchy of Cornwall.[14]

Elections for the new unitary Cornwall Council were held on 4 June 2009 and there were 123 members elected, replacing the previous 82 councillors on Cornwall County Council and the 249 on the six district councils.[18] The outgoing Cornwall County Council had 48 Liberal Democrat members, nine Conservatives, five Labour, one from the small Liberal Party with the remaining 19 seats held by Independent candidates. Mebyon Kernow had no county councillors, but nine district councillors, before the two-tier system was abolished.[19]

The Lib Dems lost overall control of Cornwall Council to 'no overall control' - this means that no single party has overall control of the new council despite the Conservatives have the largest number of councillors, however they do not have enough for a majority control.[20] The cabinet of the council was therefore formed as a coalition between the Conservatives and the Independent bloc.[21] The Conservatives received 34% of the vote (50 seats), followed by the Liberal Democrats on 28% (38 seats), the Independents on 23% (32 seats) and Mebyon Kernow on 4% (3 seats). The turnout was 41%. Labour, the Green Party, UKIP and the BNP failed to secure any seats in Cornwall.[22]

Labour gained their first seat on the council in January 2011 after winning a by-election in the Camborne North ward by 27 votes. This was a gain from the Conservative Party, after their councillor resigned.[25]

In June 2011 Liskeard North councillor Jan Powell defected from the Conservatives to join the Liberal Democrats.[26] 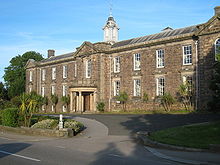 Old County Hall in Truro, which used to be the Council HQ, but is now used for other council offices and is the HQ for Cornwall Fire and Rescue and also houses the county's fire control room