The Imperial Stormtroopers are fictional soldiers from George Lucas' Star Wars universe. Stormtroopers are the soldiers of the imperial army under the leadership of the evil Sith Lord and Emperor Palpatine and his commanders, most notably Darth Vader and Grand Moff Tarkin.

They are shown in collective groups of varying organizational sizes ranging from squads to legions, and, for some, their armor and training is modified for special operations and environments.

Initially, the stormtroopers serve as the army of the Galactic Empire, putting down revolts and establishing Imperial authority.[1] The Stormtrooper Corps swell in size after Palpatine allows the addition of birth born recruits and conscripts alongside the clones.

When the Empire is firmly stabilized and an Imperial Army/Imperial Navy established, the stormtroopers become Palpatine’s personal army and are stationed on Imperial bases and cruisers, as well as on the Death Star. They maintain these roles until the Empire’s collapse after Palpatine's death in Star Wars Episode VI: Return of the Jedi. 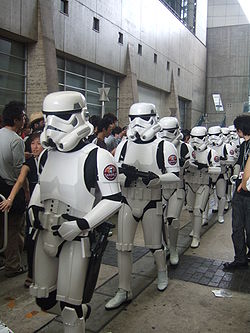 Stormtroopers at the Tokyo Game Show

The troopers' most distinctive equipment is their white battle armor, inherited from their time as clone troopers. The complete armor set completely encases the body and typically has no individually distinguishing marking (in contrast to the clone trooper armor, which typically had various colorings to denote rank or unit, stormtrooper armor has no rank affiliation).

Liz Moore and Nick Pemberton sculpted designs for the helmet. Their designs were based on conceptual drawings by Ralph McQuarrie. The armor pieces of the costume were also designed from conceptual drawings by Ralph McQuarrie. Brian Muir, who was also responsible for sculpting Darth Vader, sculpted armor pieces for the stormtrooper costume in the Art Department at Elstree Studios. The suit was moulded and initially cast in plaster. Then Brian sharpened the detail at the plaster stage. The plaster casts were then remoulded and cast in fibreglass to use as the "tools" for vacuum forming process. Suits were produced in house by Tashy Baines, the resident vacuum former, but then a problem developed with the machine.

As Shepperton Design Studios had already been used to vacuum form the helmets, the fibreglass moulds for the armour were then sent to them for vacuum forming the suits.

The armor has also been the subject of light humor for years regarding its functionality. This is due to it making its wearer easy to see, restricting his movement and range of vision, and seeming to offer no real protection from blaster fire.

The copyright status of the armour has undergone legal challenges.[2] In the US it has been ruled to be under copyright; however, recent UK court decisions considered it to be industrial design, which is only protected for 15 years, and thus the armour is now in in the public domain, but only in the UK.[2] 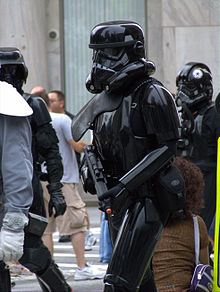 Within the original Star Wars trilogy, a number of specialized Stormtrooper units are seen. These include:

Within the Expanded Universe media such as games and comics, a number of specialized stormtrooper units are seen. The Marvel-produced comics of the late 1970s and early 1980s featured Blackhole Troopers. Other specialists have included commandos and troopers equipped to work in outer space. Others, such as the Beach Troopers, are for comical effect. Appearing only briefly in Lego Star Wars II: The Original Trilogy, they are clad in a Speedo and the trademark stormtrooper helmet. In Lego Star Wars: The Complete Saga, they are also wearing life jackets. Shadowtroopers appear in Star Wars: Jedi Knight II: Jedi Outcast wearing black armour made from a lightsaber-resistant metal called "Cortosis". This armour has a green synthetic gem set into the breastplate which gives the wearer Force powers. Their armour can also render them near invisible, with only a small area of blue discolouration giving them away, they use this ability to lie in wait and ambush the prey, most often the game's protagonist, Kyle Katarn. Shadowtroopers appear in Star Wars: The Force Unleashed and wear exactly the same type of Phase III armour as normal stormtroopers but not white in colour, it is a mixture of silver, grey and red detailing. These troopers also possess the invisible feature and use this tactic to ambush their enemies, but only if stormtrooper officers call out for support. Although according to to star wars battlefront they are droids.

Use in popular culture 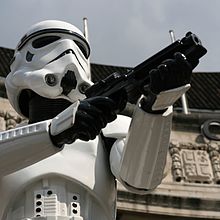