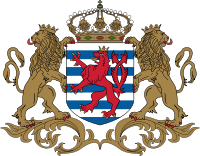 Coat of arms of the Grand Duchy of Luxembourg

The territory of Luxembourg was ruled successively by counts, dukes and grand dukes. It was part of the medieval Kingdom of Germany, and later the Holy Roman Empire until it became a sovereign state in 1815.

As Elisabeth had no surviving children, she sold Luxembourg to Philip III, Duke of Burgundy in 1441 but only to succeed upon her death. Philip captured the city of Luxembourg in 1443, but did not assume the ducal title because of conflicting claims by Anne of Austria, the closest Luxembourg relative.

In 1467, when Elisabeth II of Austria, last rival claimant to the title, renounced her rights, Philip III's son, Charles, Duke of Burgundy, assumed the title of duke of Luxembourg, making it a subsidiary title of the Duke of Burgundy.

During the War of Spanish Succession, 1701–1714, the duchy was disputed between Philip of Anjou, grandson of Louis XIV of France, from the House of Bourbon and Charles of Austria, son of Leopold I, Holy Roman Emperor, from the House of Habsburg. In 1712 Luxembourg and Namur were ceded to Maximilian II Emanuel, Elector of Bavaria by his French allies, but with the end of the war in 1713 with the Treaty of Utrecht Max. Emanuel was restored Elector of Bavaria. In 1713 the duchy fell to the Austrian branch of the House of Habsburg.

Luxembourg was occupied by French revolutionaries between 1794 and 1813. At the Vienna Congress, it was elevated to a grand duchy and given in personal union to William I of the Netherlands. 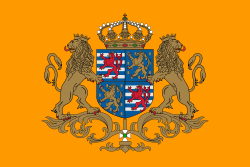 Under the 1783 Nassau Family Pact, those territories of the Nassau family in the Holy Roman Empire at the time of the Pact (Luxembourg and Nassau) were bound by semi-Salic law, which allowed inheritance by females or through the female line only upon extinction of male members of the dynasty. When William III died leaving only his daughter Wilhelmina as an heir, the crown of the Netherlands, not being bound by the family pact, passed to Wilhelmina. However, the crown of Luxembourg passed to a male of another branch of the House of Nassau: Adolphe, the dispossessed Duke of Nassau and head of the branch of Nassau-Weilburg.

In 1905, Grand Duke Adolphe's younger half-brother, Prince Nikolaus Wilhelm of Nassau, died, having left a son Georg Nikolaus, Count von Merenberg who was, however, the product of a morganatic marriage, and therefore not legally a member of the House of Nassau. In 1907, Adolphe's only son, William IV, Grand Duke of Luxembourg, obtained passage of a law confirming the right of his eldest daughter, Marie-Adélaïde, to succeed to the throne in virtue of the absence of any remaining dynastic males of the House of Nassau, as originally stipulated in the Nassau Family Pact. She became the grand duchy's first reigning female monarch upon her father's death in 1912, and upon her own abdication in 1919, was succeeded by her younger sister Charlotte, who married Felix of Bourbon-Parma, a prince of the former Duchy of Parma. Charlotte's descendants have since reigned as the continued dynasty of Nassau, and also constitute a cadet branch of the House of Bourbon-Parma.