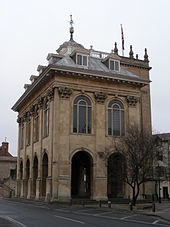 View of the County Hall building that houses the museum. 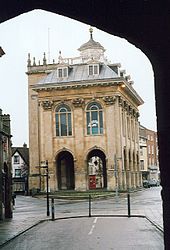 The museum is housed in a Grade I listed 17th century County Hall building, located in the Market Place in the centre of the town.[1] Nikolaus Pevsner said of the building: "Of the free-standing town halls of England with open ground floors this is the grandest".[2] The building was formerly the county hall of Berkshire. Abingdon was the county town until it ceded that title to Reading in 1867. The hall was built 1678–82 and was most likely designed by the Oxfordshire-born stonemason Christopher Kempster, who trained with Sir Christopher Wren on St Paul's Cathedral.[3] It stands on pillars with a sheltered area beneath for use as a market or other municipal functions It is next to the main market square.

From 2010, the museum and building are undergoing a two-year restoration programme,[4] partly funded by the National Lottery.

The museum has permanent collections and presents temporary exhibitions several times a year. There are also smaller exhibitions on local themes that are changed every month.[5]