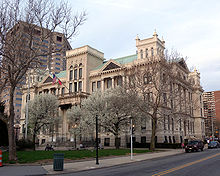 County Route 635 in Hudson County, New Jersey is a 1.44 miles (2.32 km) long street called Grove Street at its northern and southern ends and a newer name, Manila Avenue, in its middle section.

At its southern end in Downtown Jersey City, Grove Street begins at Grand Street and for several block is a small commercial district of the Van Vorst Park neighborhood[2], site of Jersey City Hall[3] and facade of the Majestic Theater, a 1907[4] vaudville venue and cinema demolished in the 1980s.[5] At the junction of Columbus Avenue (formerly Railroad Avenue) and Newark Avenue it passes a triangle which serves as entrance plaza for the PATH mass transit station which bears its name, and is an important transit hub for the county. The street continues north to 6th Street, where the name changes.[6] It changes again as it crosses Boyle Plaza, again becoming two-way, and travelling under the overpass of the Hudson Warehouse, a major distribution center, and the trestle of New Jersey Transit Hoboken Terminal rail lines. Grove street ends near the junction of Paterson Plank Road and Newark Street just over the Hoboken city line.

Manila Avenue was named for the capital of the Philippines to honor the seven per cent (7%) of Jersey City's population that is Filipino. A memorial, dedicated to the Filipino-American veterans of the Vietnam War, was built in a small square on the Avenue and a park and statue dedicated to Jose P. Rizal, the national hero of the Philippines, is nearby.[7] The Santakrusan Procession along Manila Avenue has taken place since 1977. The annual Philippine-American Friendship Day Parade is a yearly event (the last Sunday in June). The City Hall of Jersey City raises the Philippine flag for day as a tribute to the contributions of the Filipino community. Five Corners on upper Newark Avenue constitutes, though not called, a Little Manila. At Manila Avenue the distinction between historic districts (namely Harsimus and Hamilton) and urban renewal/waterfront redevelopment areas is evident. Much of the street, which previously was lined with lowrise tenements, was cleared, and partially replaced with private homes, lowrise and senior citizen housing. One block to the east the site of former railyards is now consists of retail, commercial, residential, and recreational, transportation uses called Newport.