Courtesy Lights are used by volunteer firefighters and emergency medical technicians (EMTs) to expedite their drive, in their privately owned vehicles, to their firehouse or EMS Base. Courtesy lights are also used by tow-trucks, snow-plows and other hazard vehicles, as well as some construction vehicles, rural mail delivery vehicles and school buses.[1] 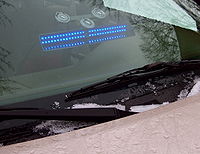 Some states, such as Kentucky, give personal vehicles used by firefighters, EMTs, and rescue squad members the same privileges as emergency vehicles,[2] and may break traditional traffic laws such as speed while en route to an emergency.[3] In New York, as a courtesy, it is civil and neighborly, but not always required by law, to let a vehicle displaying blue or green courtesy lights pass, if it is safe to do so.[1] In New Jersey it is required by law for drivers to yield to vehicles displaying a blue light or red light.[4] In Maine, TITLE 29-A, Subsection 2054 states, Firefighters, EMT's, and Paramedics per Chief or Director of there respective department can authorize the use of red or combination red and white auxiliary lights above the front registration plate and below the roof of the POV en route and at the scene of an emergency. All Maine state traffic laws and regulations apply.

A vehicle displaying amber lights is not responding to an emergency, and right-of-way need not be yielded, as it may create an unnecessary dangerous situation.

A permit is required to display a courtesy light.

If not used in accordance with vehicle and traffic laws, courtesy lights may present a great danger to volunteer firefighters and EMTs, who use the lights to exceed the speed limit or pass other vehicles. The largest category (30%) of fatal crashes for volunteer firefighters (from 1994–2004) involved personal vehicles. Of those crashed, 80% occurred en route to the firehouse for an alarm.[7] Some firefighters, usually department veterans, choose not to display courtesy lights, claiming that they do not even significantly decrease response time.[citation needed]

For vehicles with amber lights, courtesy lights generally create a safer situation. This is because the primary function of an amber light is to increase visibility, not expedite travel. Still, vehicles involved with accidents that display amber lights are not heeded as much as their red- or blue-light displaying counterparts, which makes a crash scene more dangerous for a tow-truck operator than a firefighter or EMT.[8]

In New Jersey, a privately owned vehicle (POV) is only allowed to display a blue light with a permit. The approval of the permit is based on the status of the individual. EMTs and firefighters display blue lights. While officers of Emergency Medical Service squads and fire departments are allowed to display red lights. Vehicles with courtesy lights in New Jersey are not permitted to break traffic laws. However, it is required by law for vehicles to yield to vehicles using blue(red) lights. Hide-a-way and headlight flashers (commonly known as wig-wags) are not allowed on a POV in New Jersey.