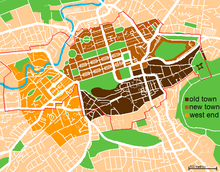 Map of the city, showing New Town, Old Town, and the West End.

The New Town is a central area of Edinburgh, the capital of Scotland. It is often considered to be a masterpiece of city planning, and is a UNESCO World Heritage Site. Although still referred to as the New Town, it was built in stages between 1765 and around 1850, and retains much of the original neo-classical period architecture.

Its most famous street is Princes Street, facing Edinburgh Castle and the Old Town across the geographical depression of the former Nor Loch. The Old and New Towns were together designated a UNESCO World Heritage Site in 1995.

Original plans to create a New Town in Edinburgh date back to a general concept considered by King James VII and II in the late 17th century.[1]

The decision to construct a New Town was taken by the city fathers, after overcrowding inside the Old Town city walls reached breaking point and to prevent an exodus of wealthy citizens from the city to London.[1] The Age of Enlightenment had arrived in Edinburgh, and the outdated city fabric did not suit the modern thinkers who lived there. Lord Provost George Drummond succeeded in extending the boundary of the Royal Burgh to encompass the fields to the north of the Nor Loch, the heavily polluted body of water which occupied the valley immediately north of the city. A scheme to drain the Loch was put in to action, although the process was not fully completed until 1817. Crossing points were built to access the new land; the North Bridge in 1772, and the Earthen Mound, which began as a tip for material excavated during construction of the New Town. The Mound, as it is known today, reached its present proportions in the 1830s.

As the successive stages of the New Town were developed, the rich moved northwards from cramped tenements in narrow closes into grand Georgian homes on wide roads. However, the poor remained in the Old Town.

A design competition was held in January 1766 to find a suitably modern layout for the new suburb. It was won by 26 year old James Craig, who proposed a simple axial grid, with a principal thoroughfare along the ridge linking two garden squares. Two other main roads were located downhill to the north and south, with two meuse (mews) providing stable lanes for the large homes. Completing the grid are three north-south streets.

Craig's original design had been for a centralising diagonal layout, echoing the design of the Union Flag, reflecting a new era of civic Hanoverian British patriotism. Whilst simpler, the revised design reflected this spirit in the names of its streets and civic spaces.[1]

The principal street was named George Street, after the king at the time, George III. Queen Street was to be located to the north, named for his wife and St. Giles Street to the south, after the patron saint of the city. St. Andrew Square and St. George's Square were the names chosen to represent the union of Scotland and England. The idea was continued with the smaller Thistle Street (for Scotland's emblem) between George Street and Queen Street, and Rose Street (for England's emblem) between George Street and Princes Street.

King George rejected the name St. Giles Street, St Giles also being the patron saint of lepers and having association with an edge-of-city slum area of London. It was renamed Princes Street after his sons. The name of St. George's Square was changed to Charlotte Square, after the Queen, to avoid confusion with George Square on the South Side of the Old Town. The westernmost blocks of Thistle Street were renamed to Hill Street and Young Street, making Thistle Street half the length of Rose Street. The three streets completing the grid, Castle, Frederick and Hanover Streets, are named for the views of the castle, the father of King George and the royal family name respectively.

Craig's proposals hit further problems when development began. Initially the exposed new site was unpopular, leading to a £20 premium being offered to the first builder on site. Doubts were overcome soon enough, and construction started in the east with St. Andrew Square.

Craig had proposed that George Street be terminated by two large churches, situated within each square. Sir Lawrence Dundas, the landowner, decided to build his own home here, and commissioned a design from Sir William Chambers. The resulting Palladian mansion, completed in 1774, is now the headquarters of the Royal Bank of Scotland. St. Andrew's Church had to be built on a site on George Street. The lack of a visual termination at the end of this street was remedied in 1823 with William Burn's monument to Henry Dundas.

The first New Town was completed in 1800, with the construction of Charlotte Square. This was built to a design by Robert Adam, and was the only architecturally unified section of the New Town. Adam also produced a design for St. George's Church, although his design was superseded by that of Robert Reid. The building, now known as West Register House, now houses part of the National Archives of Scotland. The North side of Charlotte Square features Bute House—formerly the official residence of the Secretary of State for Scotland. Since the introduction of devolution in Scotland, Bute House is the official residence of the First Minister of Scotland.

The north side of Robert Adam's Charlotte Square. Bute House, official residence of the First Minister of Scotland, is in the centre.

The New Town was envisaged as a purely residential suburb. In the Second New Town, townhouses generally occupied the east-west streets, with blocks of flats (called tenements in Scotland) along the north-south streets. Shops were originally generally restricted to the lower floors of the wider north-south streets. The larger houses had service mews running behind and parallel to their terraces. In the First New Town this pattern was less rigid, and it had few planned commercial ground floors.

It did not take long for the commercial potential of the site to be realised. Shops were soon opened on Princes Street, and during the 19th century the majority of the townhouses on that street were replaced with larger commercial buildings. Occasional piecemeal redevelopment continues to this day, though most of Queen Street and Thistle Street, and large sections of George Street, Hanover, Frederick and Castle Streets, are still lined with their original late 18th century buildings. Very large sections of the Second New Town, built from the early 19th century are also still exactly as built.

New Register House, home of the Court of the Lord Lyon

After 1800, the success of the first New Town led to grander schemes. Four further extensions to the New Town have been described.[2] The 'Northern New Town' aimed to extend Edinburgh from the North of Queen Street Gardens[3] all the way to the Water of Leith, with extensions to the East and West. These developments took place mostly between 1800-1830. Initial designs followed the original grid orientation of Craig’s First New Town, with entire streets being built as one construction. Building continued on an extended Hanover Street, here named Dundas Street, almost 1 km to the Water of Leith at Canonmills. Broad streets and grand squares were laid out to either side. The Picardy Place extension (including Broughton Street, Union Street and East London Street) was mostly finished by 1809.[3] To the West of the original New Town, Shandwick Place, an extension of Princes Street, was started in 1805. Development of Melville Street and the area North of Shandwick Place followed in 1825.[3] The Gayfield Estate (Gayfield Square) extension was designed in 1807 and from around 1813 the New Town gradually replaced and developed the older village of Stockbridge.[3] The Painter Henry Raeburn bought the Deanhough estate in the Northwest of the New Town and started development in 1813 with Anne Street named after his wife.[3] In 1822 the Earl of Moray, had plans drawn up to develop his estates (including Moray Place) also in the Northwest of the New Town sloping down to the Water of Leith.[3] 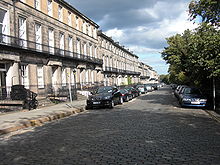 In order to extend the New Town eastwards, the Lord Provost, Sir John Marjoribanks, succeeded in getting the elegant Regent Bridge built. It was completed in 1819. The bridge spanned a deep ravine with narrow inconvenient streets and made access to Calton Hill much easier and agreeable from Princes Street.[4] Edinburgh Town Council organised a competition for plans to develop the Eastern New Town but the result was inconclusive. Eventually designs by the Architect William Henry Playfair were used to develop Calton Hill and Edinburgh’s Eastern New Town from 1820 onwards.[5] Playfair’s designs were intended to create a New Town even more magnificent than Craig's.[6] Regent Terrace, Calton Terrace and Royal Terrace were built but the developments to the North of London Road were never fully completed. On the South side of Calton hill various monuments were erected as well as the Royal High School in Greek revival style.

A few modest developments in Canonmills were started in the 1820s but none were completed at that time. For several decades the operations of the tannery at Silvermills inhibited development in the immediate vicinity. From the 1830s onward, development slowed but following the completion in 1831 of Thomas Telford’s Dean Bridge, the Dean Estate including the village of Dean had some developments built. These included the Dean Orphanage (now the Dean Gallery), Daniel Stewart's College, streets to the Northeast of Queensferry Street (in the 1850s), Buckingham Terrace (in 1860) and Learmonth Terrace (in 1873).[3] Plans to develop the Moray Estate were drawn up in 1822 and most sites were sold by 1836[7], although some buildings were not built until 1855.[3]

In the 19th century Edinburgh's second railway, the Edinburgh, Leith and Newhaven Railway, built a tunnel under the New Town to link Scotland Street with Canal Street (later absorbed into Waverley Station). After its closure, the tunnel was used to grow mushrooms, and during World War 2 as an air raid shelter.

Given the great continuity of the built form in the New Town it is quicker to list what little has gone, rather than muse on the numerous streets which are unchanged.

The most "important" loss was probably Bellevue House by Robert Adam which was built in what is now the centre of Drummond Place in 1775. This was demolished in the 1840s.[7]

Lost streets include James Square, demolished in the 1960s to make way for the St James Shopping Centre and offices for the Scottish Office. This was demolished largely on the pretext of being slums, but this was largely defined on a non-structural basis.

Also demolished as "slums" was Jamaica Street at the west end of the Second New Town.

The New Town is home to the National Gallery of Scotland and the Royal Scottish Academy, located on The Mound. The Scottish National Portrait Gallery is on Queen Street. Other notable buildings include the Assembly Rooms on George Street, the Balmoral Hotel (formerly called the North British Hotel, after a railway company) with its landmark clock tower above Waverley Station, and the Scott Monument.

The Cockburn Association (Edinburgh Civic Trust) is prominent in campaigning to preserve the architectural integrity of the New Town.

The New Town contains Edinburgh's main shopping streets. Princes Street is home to many chain shops, as well as Jenners department store, an Edinburgh institution. George Street, once the financial centre, now has numerous modern bars, many occupying former banking halls, while the new Multrees Walk on St. Andrew's Square is home to Harvey Nichols and other designer shops. The St. James Centre, at the east end of the New Town, is an indoor mall completed in 1970. Often considered an unwelcome addition to New Town architecture, it includes a large branch of John Lewis. Also, by the Waverley Railway Station lies the Princes' Street Mall, which contains many high street stores.