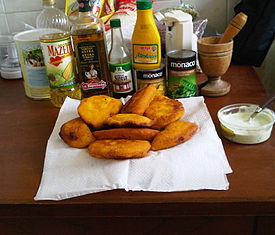 Due to its location in the world, its diversity of industrial resources and the cultural diversity of the Venezuelan people, Venezuelan cuisine often varies greatly from one region to another. Its cuisine, traditional as well as modern, is influenced by indigenous peoples and its European ancestry[1] (Italian, Spanish, Portuguese, and French), and is also influenced by African and Native American traditions. Food staples include corn, rice, plantain, yams, beans and several meats.[1]

The most common foods by region can be broadly classified as follows: 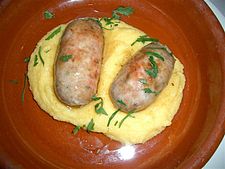 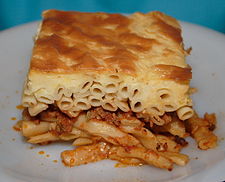 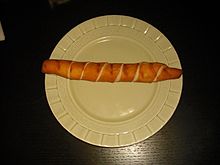 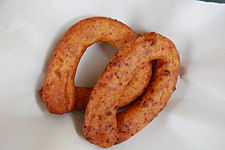 Mandocas are a Venezuelan deep-fried pretzel made from cornmeal, often served hot with butter and cheese

Hallacas typically have a mixture of beef, pork, chicken, capers, raisins, and olives wrapped in maize (cornmeal dough), bound with string within plantain leaves, and boiled or steamed afterwards 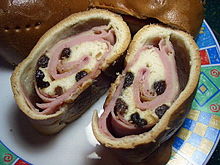 These street food stands are very common in Venezuela. The so-called Calle del Hambre, "Street of Hunger," is the name of a street or a combination of them that serve as a stage for a variety of street vendors to establish their business. The most common and popular is the "Perreros", where one can get a pepito, hamburger, or perro caliente. Other vendors sell arepas, Mexican food, or typical Venezuelan food. This food is not governed by the regulations of high standard cuisine or even homemade meals, however, the massive consumption of this kind of food can produce too much fat on the body, caused by the high caloric content of this food. Fast food stands in Venezuela usually sell hot dogs, hamburgers and pepito, but the most common vendors do not sell pepitos. Hot dogs are served in two ways: one is the wiener style sausage, which is placed in a steamed hot dog bun and served with portions of different types of condiments and fixings (typically chopped fried potatoes, cabbage salad, and chopped onions). Some vendors use shredded American cheese. Sauces and toppings include ketchup, mayonnaise, mustard, guasacaca, garlic sauce, onion sauce, hot chili and tartar sauce. There are other vendors who sell hot dogs with Polish sausage, using the same condiments and fixings. Hamburgers use the same condiments and fixings as hot dogs, but the vendors often add fried ham, fried cheese, and fried egg with the hamburger. Some vendors also use avocado, tomato, bacon, alfalfa seeds, and more to create their own signature on their hamburgers. Hamburgers can be made with beef, chicken, pork chop or chorizo. The unique pepito is a combination of beef and hot dog. This consists of a huge hot dog which instead of sausage has grilled beef or chicken, served in a French style bun. Some vendors use pork chops as well. The pork chop's variations of service on the vendors are called "Chuleton".