The Federal Palace (German: Bundeshaus, French: Palais fédéral, Italian: Palazzo federale; Latin: Curia Confoederationis Helveticae) is the name of the building in Bern in which the Swiss Federal Assembly (federal parliament) and the Federal Council are housed.

The building was designed by the architect Hans Auer and its inauguration took place on 1 April 1902. The total cost, at the time, was 7,198,000 Swiss Francs. 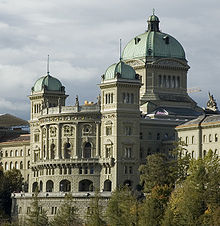 Federal Palace seen from the south side.

The two chambers where the National Council and the Council of States meet are separated by the Hall of the Dome. The dome itself has an external height of 64 m, and an internal height of 33 m. The mosaic in the center represents the Federal coat of arms along with the Latin motto Unus pro omnibus, omnes pro uno (One for all, and all for one), surrounded by the coat of arms of the 22 cantons that existed in 1902. The coat of arms of the Canton of Jura, created in 1979, was placed outside of the mosaic.

The name in German means "federal house", whereas the French and Italian names both translate to "Federal Palace". 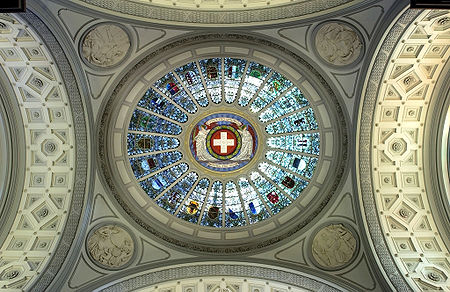 Dome of the Federal Palace. The name Jura can be read at the bottom of the picture, indicating where the coat of arms of the Canton of Jura was placed after the secession from Berne in 1979.