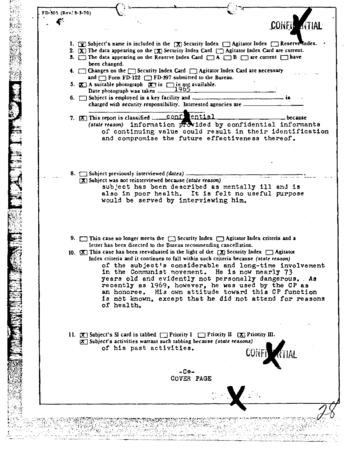 The FBI Indexes were a series of personnel databases used by the FBI before the adoption by the Bureau of computerized databases. They were based on paper index cards. They were used to track US citizens and others believed by the Bureau to be dangerous to national security. The indexes generally had different 'classes' of danger the 'subject' was thought to represent.

Around the time of World War I and the First Red Scare, William Flynn of the Bureau of Investigation had Herbert Hoover set up a General Intelligence Division. The division took files from the Bureau and 'systematized' them via index cards; according to Walker the cards covered 200,000 people. [1] The GID was shut down in 1924.

J. Edgar Hoover described it as having come from his resurrected General Intelligence Division in Washington:

"This division has now compiled extensive indices of individuals, groups, and organizations engaged in subversive activities, in espionage activities, or any activities that are possibly detrimental to the internal security of the United States. The Indexes have been arranged not only alphabetically but also geographically, so that at any rate, should we enter into the conflict abroad, we would be able to go into any of these communities and identify individuals or groups who might be a source of grave danger to the security of this country. These indexes will be extremely important and valuable in a grave emergency"[2]

The Custodial Detention Index was a list of suspects and potential subversives, classified as "A", "B" and "C"; the ones classified as "A" were destined to be immediately arrested and interned at the outbreak of war. Category A were leaders of Axis-related organizations, category B were members deemed "less dangerous" and category C were sympathizers. The actual assignment of the categories was, however, based on the perceived individual commitment to the person's native country, rather than the actual potential to cause harm; leaders of cultural organizations could be classified as "A", members of non-Nazi and pro-Fascist organizations.

The program involved creation of individual dossiers from secretly obtained information, including unsubstantiated data and in some cases, even hearsay and unsolicited phone tips, and information acquired without judicial warrants by mail covers and interception of mail, wiretaps and covert searches. While the program targeted primarily Japanese, Italian, and German "enemy aliens", it also included some native-born American citizens. The program was run without Congress-approved legal authority, no judicial oversight and outside of the official legal boundaries of the FBI. A person against which an accusation was made was investigated and eventually placed on the index; it was not removed until the person died. Getting on the list was easy; getting off of it was virtually impossible.[3]

According to the press releases at the beginning of the war, one of the purposes of the program was to demonstrate the diligence and vigilance of the government by following, arresting and isolating a previously identified group of people with allegedly documented sympathies for Axis powers and potential for espionage or fifth column activities.[4] The list was later used for Japanese American internment.

Attorney General Francis Biddle, when he found out about the Index, labeled it "dangerous, illegal" and ordered its end. However, J. Edgar Hoover simply renamed it the Security Index,[5] and told his people not to mention it.

Note this is not to be confused with Japanese internment and Roosevelt's Executive Order 9066; Hoover actually opposed those measures.[6]

The Security Index itself was merged together with the Agitator Index and the Communist Index, (itself renamed to the Reserve Index in 1960), to the Administrative Index (ADEX) in 1971, and discontinued in 1978, though the records are still kept as inactive at FBI headquarters and 29 field offices.[7][8] 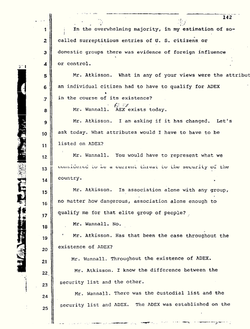 ADEX, or Administrative Index, lasted from 1971 to January 1978. It integrated the Security Index, the Agitator Index, and the Reserve Index. [7] It was used to track people "considered to be a threat to the security of the country".[9] ADEX had four 'categories'. [10]

In Howard Zinn's FBI FOIA files, there are two separate pages in which an agent says he should be in category III: [10]

"He has been a member of the Communist Party, 1949-1953. A chief critic of the United States Government politices. A familiar figure at anti-war demonstrations up to 1972. Organized a protest rally to protest serious indictments against Father Berrigan and other members of the East Coast Conspiracy in the Summer of 1971"

"It is recommended that subject be included in ADEX, Category III, because he has participated in activities of revolutionary organizations within the last five years as evidences by overt acts and statements established through reliable informants"

Paul Robeson was on ADEX as Category III: "because of his long time close contact with CPUSA leaders. He was honored by the CP as recently as 1969"[11]