Caribbean Sailing Yachts, also known as CSY, are heavy-displacement recreational sailboats built during the 1970s and 1980s in Tampa, Florida. CSY went out of business in the early 1980s; however, the well-founded boats have continued to sail the world's oceans for the past two decades. CSY had a rather unique script logo which was carried through on their brass companionway medallion, their sales literature, dishes, and perhaps was part of the trailerboard design or vice versa.[1]

Insert images when approved of trailerboards, and dishes. The CSY boats were sold directly from the factory, without any dealerships or middle-men. Two books were published which were sold and or given out showing all stages of construction. These books were used as the primary means of promotion for the yachts. The books were titled "CSY Guide to Buying a Yacht". One 168-page soft-cover book was published in 1977 it had many color renderings. A shorter 138-page soft-cover version was republished in 1979, with less color pictures. Additionally CSY used a film strip, plant tours, boat shows and trial sails as sales tools. CSY also published a 38-page soft-cover "CSY Charter Manual" These published materials were all key marketing tools.[JPEG Images to be added here when approved197 Book, 1979 book, chartering manual. 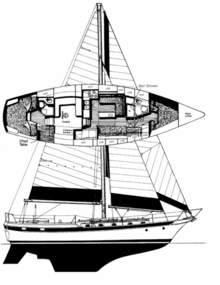 Caribbean Sailing Yachts Corporation (CSY) was initially a charter company, operating primarily in the Caribbean. They were the first company to come up with the charter ownership idea. This concept was formulated by the CSY founder and owner Dr. John VanOst a dentist who loved to sail. CSY developed and perfected the 'charter lease back' program where an individual purchased the yacht and subsequently placed it into the charter fleet in order to cover the cost of the initial payments. Dr. Van Ost came up with a time share concept just prior to the end of the CSY company where he was going to build the Corsair 81 mega yacht (in its day). These yachts were going to be available as time shares with crew. CSY originally purchased boats from companies such as Irwin, but soon realized they needed stronger boats which would withstand the rigors of bare-boat charter, with less than experienced captain and crew. CSY went into the boat manufacturing business, working initially with Ted Irwin, a well-known and successful designer of very affordable cruising and racing sailboats in the Tampa area at the time, who particularly influenced the CSY 44 hull design. From 1975 to 1980 CSY built boats of between 33 and 44 feet (13 m). They were similar in their appearance and hull shape. The 44-foot (13 m) designs feature a raised aft deck allowing for a large aft stateroom. CSY boats were built to unusually high standards of strength, durability and quality, due to the demands of their use in the charter business. The CSY Guide described how the boats met Lloyd's stringent design and boat building requirements. Insert images of the late VanOst and Schmidt

Although many of these new boats were purchased outright by their new owners, most, particularly the 44 walk-over model, were sold under an agreement that the boat would be in charter, run by the CSY Charter Company for a number of years, after which the boat would be paid off and revert to the "original purchaser". This system is a typical arrangement with many boats under charter even today. It is known as the "charter lease back" and is used by such companies as the Moorings and Sunsail.

CSY 44's were built with either a deep or shallow draft. Deep-draft models were designed so that their draft could be modified and permanently changed to shoal draft. This enabled the same boat to initially be used as a deep-draft vessel in the Caribbean under charter, and then returned to their owner who could then make the draft modification so the boat could be cruised on the East Coast, the shallow Florida Keys, or the Bahamas.

CSY developed several models including a 33, two layouts of a 37, the popular 44' "Walkover", a 44' "Walk Through", a 44' pilothouse, and even a special purpose sailing / fishing vessel known as the Bottomliner.

The CSY line was well designed. Features like a built-in full-size trash receptacle in the galley, large refrigeration boxes (3 boxes totaling 21 cubic feet (0.59 m3) on the CSY 44 WO), and a larger-than-king-size bed in the aft master cabin (CSY 44) made the boat comfortable in port as well as a good sea boat.

CSY did not use wood lamination in its construction, a technique that is the curse of many boats of this vintage. The CSY hull is up to 1.5" of solid fiberglass reinforced plastic resin with 14 dual layers (one sheet of fiberglass mat and one sheet of fiberglass weave = one layer). The avoidance of wood cores extends to the deck, which is also solid fiberglass. The only wood used in the construction of these boats are heavy laminated structural stringers, bulkheads and interior furniture.

CSY developed a full line of sailboats: the 33, the 37, and the 44, initially in two configurations: the "walk-over", and the pilothouse. Most of the 44's built were walk-overs, with a very spacious cockpit and separate, unconnected staterooms forward and aft. Only much later, did CSY build the 44 "walk-through" model, and only about 40 of these were built, before CSY went out of business. 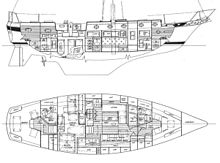 This model is referred to as "walk-over" because one has to walk up to the cockpit from the main salon and then down to the separate aft cabin.[2]

The CSY 44 WO is typically what one thinks of when someone mentions a CSY. This is due to its use as a charter boat in the Caribbean in the late 1970s and early 1980s. 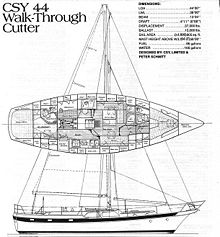 About 41 of these were built, with the last boat being number 42, completed outside the yard.[7]

The CSY 44 Walk Throughs were built late in the production run and are sought after boats, mainly because of their walk-through configuration. While this design sacrifices some cockpit space in order to add the below-decks walkway from the main salon to the aft master stateroom, it is seen by many as a fair trade. It has a comfortable, conventional cockpit with ample room for guest visiting. There are two longitudinal bench seats long enough for sleeping and an ample bench seat aft of the central binnacle. Other layout differences from the Walk Over include a stand-up engine room with workbench to port, a main cabin navigation station/table to port, the galley with side-loading refrigerator/freezer aft located in the starboard passageway leading aft, and all-oak instead of teak interiors. Many of these boats were outfitted with a large fiberglass box on the stern deck suitable for fuel and gas storage. The after section of the main cabin coach roof is raised, adding headroom below and increasing visibility through four large windows.

Many Walk Throughs were delivered with shoal draft and tall mast. The normal rig configuration was a cutter, with a few rigged as cutters/ketches.[8] All of the WT masts were in the cutter position, and if a ketch, a mizzen would be added onto the aft deck with the boom extending far astern.

This version of the CSY was delivered as a true Ketch and have the main mast moved forward 4 feet (1.2 m) from the cutter position of the other rigs. This true ketch rig was the only rig available on the Pilothouse 44.

Only 6 of the Bottom Line 44's were actually built. This model was a CSY hull and rigging modified to be a fishing trawler. The idea was the owner/fisherman could use the sail to help defer the cost of fuel when fishing. The original idea of the vessel was to have a large fish hold centered in the boat, with a crew compartment forward and a Captains quarters aft and work center in the tall pilothouse. This commercial pilothouse provides a good visible with navigation counter, resting berth, and galley—sliding doors either side. A shaded area was built over the fish hold; side decks are continuous, with no steps or raised section aft.[12]

During the fifth year of manufacturing the CSY 44 in its various versions, the CSY Yacht Corporation came out with a new concept to reduce the cost of the yachts. This new version was marketed as the CYGNET 44 line. Shortly thereafter, the CSY Yacht Corporation went out of business. This must have happened in 1981. The CYGNET 44 WT was introduced at the Fort Lauderdale Boat Show in 1980. The Cygnet did not have the trademark CSY hull ports on its bow.[13]

The CSY 37 is an aft cockpit model with a roomy interior. The CSY 37 was built to the same high standards of construction as the CSY 44.

The CSY 33, designed by P. Schmitt, was the smallest CSY hull put into production. Like all CSYs it is a sturdily built boat that exhibits many of the CSY distinctive touches such as the scroll work on the bow. The CSY 33 was produced from 1979 to 1982. The 33 was a flush-deck vessel with a 'pilothouse-style' main saloon.

This boat is often confused with the other CSYs on the market; however, it has no relationship to the Caribbean Sailing Yachts or the CSY company.[15]

Along the way, another version of the CSY-44 was designed and built. The CSY-44 Pilot House Ketch was introduced at the fall boat shows.

A CSY-37 was designed, built, and shown for the first time at the Miami Boat Show in 1978. The CSY-37 yacht was subsequently redesigned into two models, the two stateroom model, and the one stateroom model.[16]

Many ask "if they made such a good boat what happened to them?" CSY was a victim of building their boats too well! They went broke because the cost of the boats was too high for the price being asked. Some say this was due to their view of the business. Apparently they viewed boat production simply as a means to supply their charter fleet in the Caribbean. Unfortunately CSY was not able to maintain this business model. Since their main customer was lease back for their charter business, the closing of tax loopholes most likely contributed to or accelerated their demise.[15]

Antigua Yachts, under the ownership of John Coats, purchased the CSY molds and boats in progress and started building the CSY 44 again, under the new name of Antigua 44. It is said that 20-30 of these highly customized versions of the CSY 44 walk-through were built in the 80's.[1] Oftentimes these boats had teak interiors versus the white oak or Formica interiors of the earlier CSYs. Antigua only made few of these boats before going out of business, thus ending the CSY line of sailing yachts.