Student television in the United Kingdom

Student television in the United Kingdom 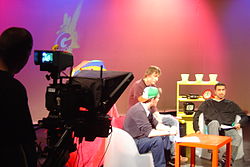 A programme being filmed by the University of Glasgow's student television station, GUST

Content is not generally output across traditional media, as a broadcast licence may be prohibitively expensive to small non-profit organisations. Most student television stations use the Internet as a primary method of distributing content; either on a dedicated website, via their university's pages or on video sharing sites such as YouTube. Student television encapsulates a variety of different programming styles and techniques: from large stations funded by their universities who broadcast into student accommodation and buildings, to a single student uploading occasional shows to the web.

Some student stations are affiliated with The National Student Television Association (abbreviated NaSTA), which has thirty member stations.[1] The association holds an awards ceremony once a year to reward the best work submitted by the member stations across a number of categories.

Prior to the advent of digital video technology, particularly editing software, a student television station was costly to run and the programmes were difficult to edit. As digital technology became more available and its cost reduced, it became possible for student societies to move to digital video production.

Student produced television is becoming increasingly recognised in the United Kingdom, with the National Union of Students having awards for both "Best Media Student" and "Student Broadcaster of the Year",[5] as well as the Royal Television Society's awards for student television stations and student produced content.[6] The Guardian hosts its Student Media Awards annually, offering a "Broadcast Journalist of the year" award.[7]

In 2006, An animation called Badgered by Sharon Colman who was a student at the National Film and Television School[8] was nominated for an Academy Award for Best Animated Short Film.[9][10]

In 2011 the short film "The Confession" by Tanel Toom, who was a student at the National Film and television School, was nominated for an Academy Award for Best Short Film.

LSUTV (Loughborough Students' Union TV) presenter Ore Oduba, who won the NaSTA best male award in 2008,[11] went on to be hired by the BBC in July 2008 to present the children's TV show Newsround.[12]

The National Student Television Association (NaSTA) is formed of thirty affiliated stations from all over the United Kingdom. It runs an annual awards ceremony in which eligible stations submit examples of their programming for appraisal by judges drawn from the wider broadcast industry.[14]

The earliest record of a NaSTA conference dates from the 1995 conference, with only eight member stations in attendance.[15] Each year one of the affiliated stations volunteers to be the host station of NaSTA, hosting the awards ceremony and administrating the organisation - this includes the managing of finances, communications and promotion for the entire organisation.

In October 2008 NaSTA launched Freshers TV, a collaboration of over 20 student stations across the United Kingdom providing a television channel to cover freshers' week at universities across the country. This was made available on Freewire, SUBtv and online via the Freshers TV website with the assistance of the JANET network.[16]. The first live FresherTV show was broadcast in October 2010 by hosts, LSUTV, and another in October 2011 by new hosts SUSUtv. [17]