For the character from Babylon 5, see John Sheridan (Babylon 5).

Starkiller, also known as Galen Marek and the Apprentice, is the main character of the Star Wars: The Force Unleashed project (including a video game, novel, and comics), who first appeared in the game Soulcalibur IV. He is voiced by Sam Witwer, who also gave his likeness to the character.[1] After Darth Vader kills Galen's father, he is raised by Vader and is made his secret apprentice, under the name "Starkiller".[2] He is potent with using the Force for destructive purposes, with Witwer describing him as less of an assassin and more of a "Force wrecking ball".[3] After Starkiller's supposed sacrificial death in Star Wars: The Force Unleashed, he is either resurrected or cloned by Darth Vader in order to be his secret apprentice again. Starkiller escapes from the cloning facility, and at the end of The Force Unleashed II he captures and imprisons Darth Vader.

The character's name is taken from Star Wars creator George Lucas' working name for Luke Skywalker, "Annikin Starkiller";[4][5] the character is designed to be a "photo-negative" of Skywalker.[3][6] Witwer described the character as being extremely competent, aggressive and unsubtle, but having an innocent side to him, stating that his growth had been stunted by being raised by Vader, meaning there are many parts of the character that are wide-eyed and innocent.[3] Witwer has also said that while for other Force-users fighting a battle against a powerful opponent might be a difficult struggle for them, for Starkiller "finding a moment of inner peace is the true struggle".[1]

Starkiller has been well received by IGN, who called Starkiller's story arc in The Force Unleashed "nice and complete",[7] as well as by Game Informer, UGO Networks and GameDaily. However, GamesRadar has criticized Starkiller's design.[8] In GameSpot's vote for the greatest video game character of all time, Starkiller was eliminated in round 1 against Niko Bellic.[9]

George Lucas motivated the team working on The Force Unleashed to make a brand-new character.[10] Before deciding on the character of Starkiller, other ideas for the main character included a Han Solo-like smuggler, a superheroic Rebel Wookiee, "the last Skywalker" and a gadget-wielding mercenary.[10][11][12] The developers of The Force Unleashed used feedback from focus test respondents and executives at LucasArts in order to make Starkiller.[10] The developers consciously decided not to give Starkiller a name in the game, but as the novel's author (Sean Williams) said he needed a name Starkiller was given the name "Galen Marek" in the novel.[4][13]

Starkiller was designed as a photo-negative of Luke Skywalker,[3][6] and is named after "Annikin Starkiller" (Luke Skywalker's original name in Star Wars's early scripts).[4][5] The developers of The Force Unleashed tried to avoid making Starkiller too rigidly defined while keeping the character developed. The developers also wanted to avoid making Starkiller seem irredeemably evil, and used elements of his backstory and his relationships with other characters to balance it, while trying not to explain too much of his backstory. In order to avoid the character being over emotional, they tried to let short pieces of dialogue and looks carry scenes so that the player could interpret how Starkiller felt.[14] They attempted to make Starkiller feel like he would belong in the classic Star Wars trilogy by making his actions faster and more intense.[6] During an interview to Haden Blackman by The Guardian, Blackman claimed that most of the testing players wanted the character to be ultimately redeemed by the end of the game.[15] 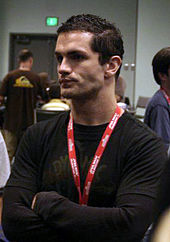 Sam Witwer provides both the voice and the likeness for the character of Starkiller.

Starkiller was voiced by and given the likeness of Sam Witwer. According to Blackman, the staff were very hard in casting Witwer as Starkiller, but claimed he was far above the other candidates and that "he was already inhabiting the mind of this character". Starkiller's expressions are based on Witwer's, which Blackman described as a "a new approach for LucasArts", noting that it "affected the way we handled casting for The Force Unleashed" and comparing it to how people see Bill Nighy as Davy Jones in the Pirates of the Caribbean movies.[1] Blackman noted that Witwer brought new ideas and a sense of humanity to Starkiller.[14] Sam Witwer has said that Starkiller would be a character he wouldn't mind revisiting.[6]

During the concepting stages of The Force Unleashed II the developers considered replacing the character with either a new Force wielder or a previous named Star Wars character. However they decided to keep Starkiller as the player character as they were fond of and were attached to him, and felt that there was more story that he could supply and they could build a franchise around him.[16] Blackman commented that after deciding how to have Starkiller return, he felt "it all made sense and fell into place".[16] Developers tried to make The Force Unleashed more personal to Starkiller,[16][17] with the game focusing on Starkiller's search for the truth of his identity.[17]

Witwer described Starkiller as less of an assassin and more of a "Force wrecking ball".[3] Witwer also described the character as being extremely competent, aggressive and unsubtle, but having an innocent side to him, stating that his growth had been stunted by being raised by Vader, meaning there are many parts of the character that are wide-eyed and innocent.[3] Witwer has also said that while for other Force-users fighting a battle against a powerful opponent might be a difficult struggle for them, for Starkiller "finding a moment of inner peace is the true struggle".[1]

Witwer compared him as being "two parts Han Solo, one part Darth Maul, one part Indiana Jones [...] and then one essential part Luke Skywalker", noting that in the character's development "[b]ehind it all, there had to be this wide-eyed kid who was trying to figure out what the hell to do". According to Witwer, Starkiller's characteristics and personality depended on who he was talking to and what circumstances he is in. Witwer called him "a really interesting guy, speaking of layered characters".[6] Although acting as a villain in the beginning of the first game, Blackman has commented how Starkiller is "really just this damaged kid."[14]

Starkiller first debuted in Soulcalibur IV as a fighter, alongside Darth Vader and Yoda.[19] In Soulcalibur IV he is known as the "Apprentice". After Darth Vader sends him to investigate a dimensional rift that seems to be growing, he passes through to the Soulcalibur universe. The Apprentice defeats Algol and returns to Vader without either the Soul Edge or the Soul Calibur, due to perceiving them as worthless.[20] Vader Force Chokes the Apprentice for disobeying him,[20] causing the Apprentice to draw his lightsaber and prepare to fight Darth Vader.[21] Starkiller also appears in Star Wars: Visions of the Blade, an Infinities comic focusing on the Soulcalibur and Star Wars crossover.[22]

In the Star Wars: The Force Unleashed video game, as well as the novel and comic adaptions, Darth Vader dispatches Starkiller to kill the Jedi who survived the Great Jedi Purge (an event portrayed in Star Wars Episode III: Revenge of the Sith).[23][24] Starkiller is initially kept in secret,[25] though after Starkiller is discovered by the Emperor, Darth Vader sends Starkiller to find enemies of the Galactic Empire and unite them.[26] Darth Vader later betrays Starkiller and attempts to kill those he united, but Starkiller sacrifices himself for the Rebel Alliance and becomes a martyr for the rebels.[27][28] During the game, he falls in love with Juno Eclipse, an Imperial pilot. If Starkiller chooses to kill Darth Vader rather than the Emperor at the end of the game, Starkiller becomes a minion of the Emperor and is put into a suit similar to Darth Vader's. Starkiller reappears in this suit in the Ultimate Sith Edition of The Force Unleashed game, which continues the dark-side path as a "what if" story.[29][30] However, the light-side ending is considered canon ending, and is used in the novel adaption and sequels.[2][27]

Starkiller appears under the name "Vader's Apprentice", as an unlockable character in Lego Star Wars III: The Clone Wars. He is unlocked by finding all the mini-kits in the "Defenders of Peace" level. 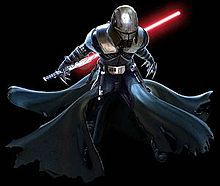 In the dark side ending of The Force Unleashed Starkiller is made the Emperor's apprentice. This redesign was reused in the Ultimate Sith Edition of the game. GamesRadar criticised the design for being just "Vader with Boba Fett’s helmet".

Hasbro has made multiple action figures of Starkiller, along with the rest of the characters in Star Wars: The Force Unleashed.[34] A Lego version of Starkiller was released as one of the three figures in the Rogue Shadow Lego set.[35]

UGO Networks chose the character as the 50th top Star Wars Expanded Universe character.[36] IGN's Jesse Schedeen called Starkiller's appearance in Soulcalibur IV the second best bonus character in the series, complementing his inclusion from a story standpoint as "[Soulcalibur IV] is about the dichotomy between good and evil, corruption and redemption, [...] Starkiller is a Dark Jedi who finds himself at a crossroads. He can either follow his master and take control of the galaxy, or break away and seek out his own destiny",[37] with Schedeen later including Starkiller in a list of characters that would make up their idea of the ultimate fighting game.[38] Chris Buffa also put the character as the 24th top gaming hunk, saying that "nothing compares to a bad boy".[39] Jesse Schedeen called Starkiller one of the most promising player characters to be released during fall 2008.[40] After the release of The Force Unleashed, Robert Workman, also from GameDaily, put the character as one of his favorite Star Wars video game characters.[41] Buffa choose Starkiller as one of the top double-crossing characters.[42] Jesse Schedeen listed Starkiller as one of the best video game entertainers of 2008, commenting that "Starkiller unleashed the Force in ways the movies never showed us".[43]

UGO Networks listed Sam Witwer's performance as Starkiller as one of their top 11 celebrity voice actors in video games.[44] Chris Buffa put Starkiller as the 19th top anti-hero, commenting that "the thought of cutting through good guys as a Sith filled us with murderous joy", also praising his eventual turn to good.[45] Jesse Schedeen also thought that it would be best if the character was not revisited in the upcoming live-action TV series after the first The Force Unleashed as "his story arc was nice and complete".[7] Starkiller was voted the top 10th Star Wars character by IGN's readers.[46] IGN later claimed Starkiller as the 34th top Star Wars character.[47] GameSpot listed Starkiller, as "The Apprentice", in a vote for the all time greatest video game character. Starkiller was eliminated in the first round after being put against Niko Bellic, a character from Grand Theft Auto IV, with Starkiller garnering 44.9% of the votes.[9] Starkiller was also voted as the 17th top video game character by Game Informer's readers.[48] Game Informer listed him sixth on their list of the "Top 10 Dorks", saying "The words "jedi" and "dork" rarely go together, but Starkiller is the Chosen One to unite them".[49]

Negatively, GamesRadar's Dave Meikleham wrote that while Starkiller was not a terrible character, he was just "basically Luke" if he'd "had all his personality removed", claiming he looked "like a generic extra from the prequels". Meikleham also mentioned that his evil design in the dark-side ending of Star Wars: The Force Unleashed was "just Vader with Boba Fett’s helmet".[8] GamesRadar's Charlie Barratt also included Starkiller in a collaboration of images demonstrating "The Buzz Cut Space Dude" on his list of the top 7 lazy character clichés.[50] Alexander Sliwinski, writing for Joystiq, criticised Starkiller's appearance in The Force Unleashed II as being a "Mary Sue".[51]