Power Rangers Operation Overdrive (abbreviated as PROO and Operation Overdrive) is an American television program, the fifteenth installment in the Power Rangers franchise based on the Super Sentai series GoGo Sentai Boukenger, which is also the thirtieth entry and anniversary of that franchise. It premiered on February 26, 2007.[1] Operation Overdrive is broadcast on Toon Disney's Jetix programming block and ABC Kids in the United States, and on stand-alone Jetix networks in other countries. The program is a co-production between The Walt Disney Company and Toei. It was also broadcasted on terrestrial network ITV in the UK.

Unique among Power Ranger series, Operation Overdrive has the Rangers exploring, operating and fighting in many different countries around the world, rather than focusing only on their home city of San Angeles. In search of their objective, the Rangers have been to Atlantis, unnamed islands in the Atlantic and Pacific, Saint Lucia, Istanbul, London, Portugal, Indonesia, Norway, Mexico, Egypt, Florida, Greece and Japan. To specifically battle villainous attacks, they have visited Rotuma Island, Australia, Brazil, and Stonehenge.

The early working title for the series was Power Rangers Drive Force, but was later changed to "Relic Hunters" and then "Operation Overdrive"[2]

In early pre-production, on July 26, 2006, the series' logo was posted on a fan message board called "Fuñaroboard." [3] This same logo was later featured on the Disney website, RangerSecrets.com, as part of the preview for the series.[4] The logo is very similar to that of the parent series Boukenger in the basic design and format.

On November 14, 2006, Disney had set up its official website for Power Rangers Operation Overdrive.[5]

Five brave, skilled, and adventurous young people are chosen to search for several magical jewels that were long ago taken from the Corona Aurora (literally "Crown of the Dawn"), so as to prevent them from coming into the possession of Moltor and Flurious, who are brothers banished long ago by the Corona's guardian for having attempted to steal it.[6] When the billionaire explorer Andrew Hartford discovered the Corona Aurora, they escaped their exile and rallied their allies. In response, Andrew Hartford selected the talented youths and modified their DNA so as to grant them exceptional physical powers by which to combat the evil. Although Moltor and Flurious initially attempted to work together, they soon became rivals. The Corona Aurora fell into Moltor's hands; yet without its jewels, it could not grant the owner universal power. Later, the evil warriors Kamdor and Miratrix began hunting for the jewels, as did the extraterrestrial 'Fearcats'. Now the Rangers, joined by a Mercurian named Tyzonn who joined their ranks as the Mercury Ranger, are forced to fight multiple villains and travel worldwide in the effort to capture the jewels before their enemies can.

In order to accomplish this purpose, the members of Operation Overdrive are equipped with futuristic technology similar to that featured in previous Power Ranger continuities, which improves in sophistication and power with successive episodes. Each time a new Ranger, new weapon, or (in one subplot, if not more) new reason for battle is introduced, that Ranger, weapon, or reason produces the decimation of one major enemy (such as Kamdor and Miratrix) or a host of foot soldiers. Thereafter the odds resume their former state. The physical powers granted by genetic modification are seldom used, seen, or mentioned, except when one or more Rangers is rescued by their use. Throughout the series, legends are included or invented to give a feeling of antiquity: these include Thor's Hammer, Atlantis, and Poseidon, who is mentioned under the Roman name Neptune. 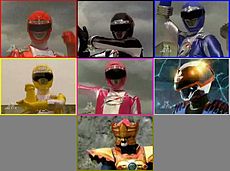 Mackenzie "Mack" Hartford
The Red Ranger; a fan of adventure stories. His physical power is apparently superhuman strength. He is the android 'son' of Andrew Hartford, who acts as the team's dispatcher. As an android, he has an infallible memory that can be accessed via a computer. The revelation of Mack's true nature caused some conflict between himself and his creator, who had concealed this truth from him until revealing it became necessary during the course of the series. Thereafter Mack became reckless of his own life (which he believed to be worth less than a human's), which he often put deliberately into danger during the battles subsequent to the revelation of his nature.[7] He is portrayed by James Maclurcan.[1][8]

William "Will" Aston
The Black Ranger; a spy-for-hire with the physical powers of enhanced hearing and sight.[9] Before being recruited, Will was carrying out a mission in Brazil. He is often shown expressing disbelief in supermundane phenomena, such as the existence of dragons or the oracular powers of a chalice. He is portrayed by Samuell Benta.

Dax Lo
The Blue Ranger; an under-appreciated stunt actor and practical joker with the power to leap immense distances.[10] Prior to becoming a Ranger, Dax was working in Hollywood. Dax is often the source of comic relief in the series. He is portrayed by Gareth Yuen.

Veronica "Ronny" Robinson
The Yellow Ranger; a confident and sometimes overly competitive stock car racer. Her physical power is superhuman speed.[11] Before becoming a Ranger, Ronny was competing in an Italian race. She is portrayed by Caitlin Murphy.[12]

Rose Ortiz
The Pink Ranger; a Mensa-level genius archaeologist who enjoys poetry and mythology. The latter interest makes Rose an invaluable source of information regarding the (often fictional) legends which she and her companions must use as the bases for their treasure-hunts. She apparently lacks a robust sense of humor, though she has been made a figure of fun on some occasions. Her power is invisibility.[13] Before she became a Power Ranger, Rose was studying in London. She is portrayed by Rhoda Montemayor.

Tyzonn
The Mercury Ranger; a Mercurian with the ability to transform his body into mercury. He followed the Fearcats to Earth to bring them to justice for causing the deaths of the intergalactic search and rescue team of which he was previously a member. It is later revealed that Tyzonn's fiancée was thought dead as a result of a fall of rocks triggered by another Fearcat, Crazar. He is portrayed by Dwayne Cameron.

In Power Rangers Operation Overdrive, there are four competing factions of villains that the Rangers must battle, in order to prevent them from acquiring the Corona Aurora's five gems.

Both the Rangers and villains travel the world in search of the Corona jewels. To aide them, they must uncover special relics that serve as clues that lead to the lost jewels.

The five jewels were scattered around the world and have taken on new gem forms. When they are brought to the Corona, they revert to their original, diamond-shaped form.

As with every Power Rangers series, each Ranger gets his or her own personal Zord that can form a larger Megazord. In Power Rangers Operation Overdrive, these are collectively referred to as the DriveMax Zords and are based on exploration, construction, demolition, and emergency vehicles. The Megazord's arms can also be interchangeable with the others. Many of these Zords are similar to the Auxiliary Dino Zords of Power Rangers Dino Thunder and some of the Auxiliary Wild Zords of Power Rangers Wild Force in that they usually replace one of the arms of the core Megazord, except the Sonic Streaker.