The de Havilland Gipsy is a British air-cooled 4-cylinder in-line aircraft engine designed by Frank Halford in 1927 to replace the ADC Cirrus in the de Havilland D.H.60 Moth light biplane.

The Gipsy went on to become one of the most famous sport aircraft engines of the inter-war period and was the engine of choice for various other light aircraft, trainers, liaison aircraft and air taxis, British as well as foreign, until long past WWII. Apart from helping to establish the de Havilland Aircraft Company as a manufacturer of light aircraft, it also established the company as an engine manufacturer in its own right.

Just like the ADC Cirrus, the Gipsy was born as a collaboration between aircraft manufacturer Geoffrey de Havilland and engine designer Frank Halford. In fact, the early history of the Cirrus and Gipsy were linked through de Havilland's D.H.60 Moth.

In 1925 Geoffrey de Havilland was looking for a reliable cheap engine for use in a light sports aircraft. More particularly, he was looking for something like his favourite World War I aircraft engine: the 240 horsepower (hp) Renault V8, but with half the weight and half the power. Halford gave it to him by building a 4-cylinder crankcase and adding to it half of the Renault's cylinders, several other of the Renault’s components, and standard parts used in car engines. The result was a 60 hp (45 kW) in-line aircraft engine that, although it fell short of the promised horse-power, was still superior to all contemporary engines for light aircraft. Most importantly it was a true aircraft engine at a time where its competitors were more often than not motorcycle engines adapted to running at high altitude. The engine secured, de Havilland Aircraft commenced manufacture of the D.H.60 Moth and the combination of reliable powerplant - the ADC Cirrus - and reliable training craft – the Moth - marked the start of serious sports flying in Britain.

By 1927 however, the Moth threatened to become a victim of its own success as continuing demand was depleting the stockpiles of surplus Renaults needed to build its Cirrus engine. The Moth now having provided a solid financial cushion, de Havilland Aircraft decided to take the problem head-on and start its own engine factory. Geoffrey de Havilland again went to his old friend Halford and this time asked him to design a completely new aircraft engine of weight and performance comparable to the latest version of the Cirrus (the 105 hp (78 kW) Cirrus Hermes).

Halford and de Havilland quickly agreed on a 135 hp (101 kW) test engine later to be de-rated to 100 hp (75 kW) for production models. While Halford went to build the engine, de Havilland designed its test-bed: the diminutive D.H.71 racer.[1] Two D.H.71s were built and although in a bout of over-confidence named Tiger Moth, their racing career was rather uneventful. Their only notable claim to fame came in capturing a world speed record of 186 mph (299 km/h) for their weight class. (The name Tiger Moth would later be used again for the D.H.82 trainer and with this aircraft gain more than its share of fame.) What the D.H.71 did not accomplish in racing successes, it did accomplish in developing the new engine and by the time the career of the D.H.71 was over, the 100 hp (75 kW) production version of its engine, now named the Gipsy, was ready to start its career.

Like the Cirrus, the new Gipsy was an air-cooled 4-cylinder in-line engine weighing a mere 300 pounds and rated at 98hp (73kW) at 2,100 rpm. The cylinders had a bore of 4.5in and a stroke of 5in (114mm × 128mm) for a displacement of 319cu.in (5.23l). It was soon developed further into the 120hp (90kW) Gipsy II; both types were to be used in the new version of the de Havilland Moth: the D.H.60G Gipsy Moth. The new engine proved itself to be docile, easy to maintain and, as demonstrated in many long distance flights by the new Gipsy Moth, reliable.[2]

Birth of the Gipsy Major 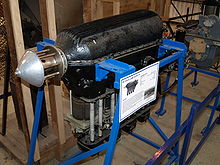 For all of this the new engine still had one drawback: its cylinders were still built on top of the crankshaft and therefore were sticking out of the top of the fuselage, right in the pilot’s field of vision. Lowering the engine was impossible as the crankshaft was directly connected to the propeller and the propeller could not be placed too low lest it would plough into the ground on hard landings or bumpy fields. The solution came as several pilots boasted that they would be able to fly their Moth upside down for as long as they wanted if it were not for the carburettor and fuel tank now being inverted. Halford decided to test this by mounting a Gipsy engine upside down and then inverting its carburettor so it was now right side up again.[3] The design proved to run just as flawlessly as the regular Gipsy engine and soon the Gipsy I and II were replaced on the production lines by the Gipsy III inverted 4-cylinder engine. The Moth with this new engine became the D.H.60 G-III; as the Gipsy III was quickly developed further into the Gipsy Major, the D.H.60 G-III was baptised the Moth Major.[4]

Building on the success of the D.H.60, de Havilland now started building other sports aircraft and trainers, all of which were powered by its own Gipsy engines. The company now produced Gipsy engines for other manufacturers as well and the Gipsy Major in particular became the engine of choice for scores of light aircraft designs, British as well as foreign. Most notably it was the engine of the famous WWII D.H.82 Tiger Moth trainer.

World War II however cut short all civilian flying and after the war de Havilland was too busy concentrating on jet engines to put much energy into its piston engines. The Gipsy did not go without a fight though. In Canada the Gipsy Major was the engine of choice for the DHC1 Chipmunk trainer, which later replaced the Tiger Moth in the RAF. By that time however, the Gipsy Major was eclipsed by the Blackburn Cirrus Major in Britain and the American Lycoming and Continental horizontally opposed engines abroad (in a twist of irony, the Blackburn itself was based on Halford’s old ADC Cirrus engine of which Blackburn had bought the license in the 1934). In its final form, the Gipsy Major used in the Chipmunk delivered 145hp (110kW).

Application list from Lumsden.[6] Gipsy Minor and Major not included. 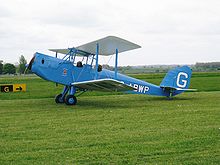 As of October 2010 approximately 17 Gipsy-powered de Havilland DH.60 Moths remain on the British register. Not all are currently airworthy.[7]

Preserved de Havilland Gipsy engines are on public display at the: