The de Havilland Gipsy Six is a British six-cylinder, air-cooled, inverted inline piston engine developed for aircraft use in the 1930s. It was based on the cylinders of the four-cylinder Gipsy Major and went on to spawn a whole series of similar aero engines that were still in common use until the 1980s.

The engines were of particular note for their exceptionally low cross-sectional area, a drag-reducing feature which made them ideal for the many racing aircraft of that period. In 1934, the basic bronze-headed Gipsy Six, rated at 185 horsepower (138 kW) at 2,100 rpm was modified for use in the DH.88 Comet air racer as the Gipsy Six "R" which produced 223 horsepower (166 kW) at 2,400 rpm for takeoff. Many Gipsy Six engines remain in service powering vintage aircraft types today.

The de Havilland company had hoped to produce a version of the basic engine capable of utilising a hydraulically actuated variable pitch (VP) airscrew based on the American Hamilton "Bracket-Type." Since there was so little time to perfect this installation, as a compromise, a French "Ratier" VP airscrew was fitted to the Comets' "R" engines, which utilised a simple air-filled bladder for a once-per-flight automatic pitch change. Later on, Comets were fitted with the Series II engine, which eliminated this crude system. Power for the "R" was increased to a takeoff rating of 223 hp by increasing the compression ratios from 5.25:1 to 6.5:1, while fitting aluminium alloy cylinder heads, domed-pistons and modified valve gear. Production of the basic fixed-pitch Gipsy Six unit began in 1935, with the engines rated at 200 hp (150 kW) at 2,400 rpm for takeoff.

This was quickly followed by production of the 205 hp Gipsy Six Series II for use with the hydraulically actuated airscrews that de Havilland were by then producing under a licence acquired from Hamilton Standard in 1934. This was effectively the engine that the company did not have time to develop for the 1934 MacRobertson race, but without the significant increase in compression-ratio needed for the Comet. The Series II unit, while superficially similar to its predecessor, utilised a hollow, splined crankshaft to permit the fitting of the VP airscrew utilising boosted pressurised oil from the engine's dry-sump lubrication system via a pilot-operated control valve. As well as differences to the crankcase and crankshaft, different cylinder barrels, pistons and aluminium cylinder heads were utilised. The "pilot-friendly" constant speed units (CSUs) were not available for these engines until 1939. The Series II was also equipped with AMC (Automatic Mixture Control) a barometric device, without which it was exceedingly difficult to adjust for a correct mixture with a CSU fitted. This feature was also carried over onto the similar Queen II. Pilots were then able to simply select the required RPM and Boost pressure required. This reduction in over-leaning also tended to extend the TBO (time between overhauls). The twin down-draught, Claudel-Hobson A.I.48 carburetters were common to all these engines. It is interesting to note that in the mid-1930s, the induction system was skilfully designed to automatically obviate the effects of carburetter icing - a dangerous problem that still plagues most piston engines in current worldwide use in 2008, more than 70 years later.

Alfa Romeo built two engine types based on the Gipsy Six design, the 110 and 115.

The series of engines proved to be reliable, and the time between overhaul (TBO) was more than doubled within a few years. The Achilles' heel of the earlier units, namely the lack of facilities for running ancillary items, an increasing requirement during the 1930s, was addressed later on the Queen engines.

These engines powered many, if not most of the racing and record-setting aircraft of the 1930s. The engines were subsequently developed into the similar de Havilland Gipsy Queen III and Queen II for military applications. Later developments, such as the postwar Queen 30 and Queen 70 series engines took the rated power from 185 hp up to nearly 500 hp, and, while being entirely new designs, still used all of the same basic configuration of the original Gipsy Six of the mid-1930s and were in use by operators such as the Royal Air Force (RAF) and Royal Navy (RN) until the 1980s.

Today, with de Havilland having long disappeared as a political casualty, very few of these engines remain in use and only a few specialist facilities can carry out overhauls.

Gipsy Six engines remain in service worldwide as of April 2010, Twelve Gipsy Six powered de Havilland Dragon Rapide aircraft are noted on the Civil Aviation Authority register although not all are currently airworthy.[1] 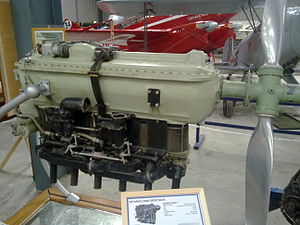 Preserved at the Shuttleworth Collection One of the original Gipsy Six R racing engines that was fitted to the winning DH.88 Comet Grosvenor House (background) of the MacRobertson Air Race in 1934, the engines were removed from the aircraft following the race and replaced with the more reliable standard Gipsy Six engines.