Iain John Hook (1948 – 22 November 2002) was working for the United Nations Relief and Works Agency for Palestine Refugees in the Near East (UNRWA) as project manager in the rebuilding of Jenin Refugee Camp in West Bank, which was home to 13,000 Palestinian refugees. He was shot and killed by an Israel Defense Forces sniper, during a battle in Jenin on 22 November 2002. A United Nations Security Council resolution condemning Israel was vetoed by the United States. In 2005 an English inquest jury returned a verdict of unlawful killing.

Iain John Hook (born in 1948, Essex) of Felixstowe, Suffolk, was married and father of two sons who are British military officers.[1] Prior to his work for the United Nations, Iain Hook was a British paratrooper. Hook supervised the reconstruction of a hospital complex in Pristina, Kosovo, in 1999, and also worked on projects in East Timor, Afghanistan, and Serbia.[2] 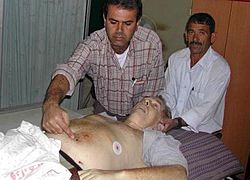 Palestinian hospital staff show the body of Iain Hook, a British citizen and a UN employee, killed by IDF sniper in Jenin on 22 November 2002.

On November 22, 2002, Hook left a voice message with Israeli authorities that gunmen had "knocked a hole in the wall" and "pinned down" his men.[6][7] During a gun-battle with Islamic Jihad militants whom Israel says were firing at troops from inside the UN compound, an Israeli military sniper killed Hook.[4][8][9] Israeli Army radio claimed that the sniper who killed him mistook his cell phone for a handgun or grenade.[4][10][11] The United Nations stated that there were no gunmen at the compound, and claims that the shooting was a mere mistake; Hook was shot in the back by a sniper with a scoped rifle, from a distance of 20 meters.[1][4] Co-workers evacuated Hook through the hole in the wall, but he died of a gunshot wound to the abdomen before reaching a hospital.[6][12]

United Nations immediately arranged an ambulance for patient evacuation but Israeli soldiers on the field delayed the ambulance sent to evacuate Hook and changed its route.[4][13]

UNRWA immediately arranged for an ambulance to evacuate the wounded staff member but the IDF soldiers on the ground refused immediate access for the ambulance and there appears to have been a delay before the staff member could be evacuated by an alternative route. Sadly, he died before arrival at the hospital. It is not known at this time whether the delay resulted in the death.[13]
—UNRWA Press Statement 22 November 2002

The UNRWA statement was later echoed by then UN secretary-general, Kofi Annan in New York, while Israel military officials have denied the charge.[4] Socialist Worker stated that the army forced the ambulance to wait 25 minutes while Hook "bled to death".[14]

Israeli Foreign Minister Benjamin Netanyahu telephoned the British Foreign Minister, Jack Straw to express regrets over Hook's death.[4] The United States vetoed "with regret" a United Nation Security Council resolution proposed by Syria condemning Israel for the killing; there were 12 votes in favor of the resolution, and 2 abstentions, in the 15 nation vote.[8][15] United States ambassador John M. Negroponte said Syria and the Palestinians seemed "more intent on condemning Israeli occupation than on ensuring the safety of United Nations personnel."[8] UN Secretary General Kofi Annan released a statement demanding that Israel punish those responsible for the killing.[16] Israel, however, found that "no criminal act had been committed" and no criminal charges were filed.[17]

More than sixty United Nations workers wrote a letter criticizing Israeli troops for "senseless" and "wanton" behavior, complaining of abuse and humiliation.[6] Israel responded by releasing to newspapers what the New York Times called a "damning intelligence report" alleging UNRWA operations being used as cover for "Palestinian terrorists", including smuggling arms in UN ambulances and hosting meetings of Tanzim in UN buildings.[6] The United Nations internal report on the matter was the subject of controversy: the initial version stated that peace activists in the compound were bringing young Palestinian men into the compound through a hole in the wall. Following protests by UNWRA staff the claim was dropped from the report.[1]

Coroner Dr Peter Dean opened the inquest at Ipswich Crown Court.[18] In 2005, Irish human rights activist Caoimhe Butterly gave written eyewitness testimony in the inquest into the killing of Iain Hook by an Israeli military sniper.[9] After the court proceedings jurors unanimously handed the verdict that Israeli military was fully accountable for unlawful killing of Iain Hook.[3] Dr Peter Hansen, former Commissioner General of the UNRWA, said that "over the past four years 13 UNRWA workers, including Mr. Hook, had been shot in similar circumstances by the Israeli army". In a statement after the verdict, Paul Wolstenholme, a colleague of Hook who was in the compound at time of the shooting, said the Israeli sniper would have known he was not a Palestinian. "It was not a case of mistaken identity, it was a deliberate act," he said.[3]

The Israeli government made an ex gratia payment to the Hook family in an agreement with the British government. The Foreign Office (UK) did not reveal the details under the Freedom of Information Act for "releasing information on the death that could damage Britain's relations with another state", while John Gillan, of the Foreign and Commonwealth Office claimed other information on the death could not be released which is related to the "formulation or development of government policy."[17][19]