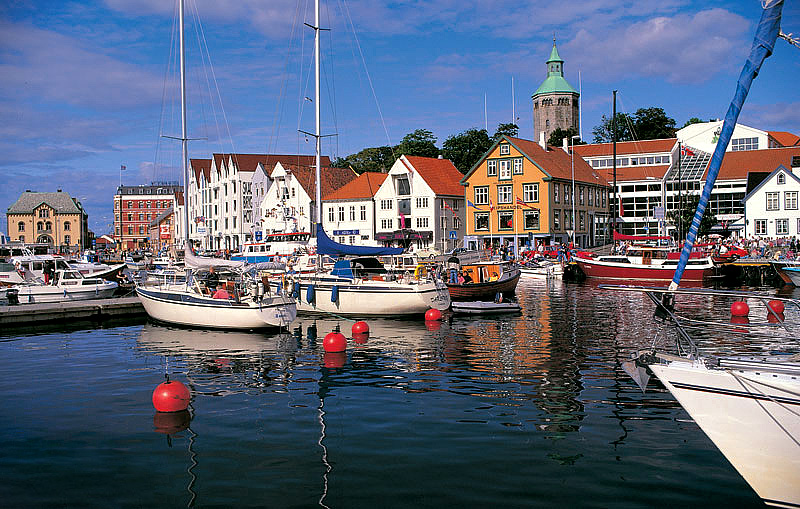 Stavanger is the 4th largest city in Norway, with a population of 120,798

The city is a combination of new and old influences. There is a significant foreign influence with the nearby , a base where rotating forces (but not permanently stationed foreign forces) are stationed, as well as foreign oil interests. Norway's oldest cathedral, , is situated right in the city centre. Stavanger has several beautiful lakes, which are popular recreation areas. Breiavatnet is located in the heart of Stavanger, while and Stokkavatnet are situated right outside.

is located 14 km from the city centre, in the municipality of .

Stavanger fulfilled an important urban role even prior to its founding in the year 1125 around the time the Stavanger bishopric was established in the 1120s. A number of historians have argued convincingly that Nord- was an economic and military centre as far back as the 800-900s with the consolidation of the nation at . Stavanger grew into a centre of civic administration and an important south-west coast around 1100–1200. With the reformation in 1536, Stavanger's role as a religious centre declined, and the establishment of in the early 17th century led to the relocation of the bishopric. However, rich herring fisheries in the 19th century gave the city new life.

The city's history is a continuous alternation between upswings and recessions. [ [http://www.stavanger.kommune.no/publikum/divsvg.nsf/svgbyhistorie/$first?opendocument&referer=Byhistorie&sub=1 Stavanger kommune - Byhistorie ] ]

The city and its surroundings was deeply rooted in religion and life, and for long periods of time its most important industries have been , , the and associated subcontractors.

In 1969, a new upswing started as oil was first discovered in the North Sea. [ [http://www.stavanger.kommune.no/publikum/Divsvg.nsf/SVGbyhistorie/3952B80210417C4EC12568E30035DD1D?OpenDocument&referer=byhistorie&sub=3 Stavanger kommune - Byhistorie ] ] After much discussion, Stavanger was chosen to be the on-shore center for the oil industry on the Norwegian sector of the North Sea, and a period of hectic growth followed. [ [http://www.stavanger.kommune.no/publikum/Divsvg.nsf/SVGbyhistorie/3952B80210417C4EC12568E30035DD1D?OpenDocument&referer=byhistorie&sub=3 Stavanger kommune - Byhistorie ] ]

The coat-of-arms is based upon a seal from 1591, which again has roots back to The Middle Ages. It shows a branch of (). The meaning and representation of the vine is currently unknown.

Stavanger is divided into 7 s. [ [http://www.ssb.no/kommuner/bydeler.html List of boroughs in Oslo, Bergen, Trondheim and Stavanger] ]

Stavanger is also partitioned into 22 parts and 218 smaller parts.

The Department of Adolescence and Quality of Life, in the municipality (Oppvekst og levekår i Stavanger kommune) has been split into 4 parts. These are independent of the borders of the boroughs. They are Eiganes and Tasta, Hinna and Hillevåg, Storhaug, Hundvåg and Madla. The Department of Labour and Wealth (Arbeids og velferdsetaten - NAV) which was opened 3 July. 2006, also uses this partitioning.

The city is located on a peninsula on the southwest coast of Norway. The climate is maritime mild ( - cfb) and rather windy, with all monthly temperature averages above freezing, and precipitation 1200 mm/year. Summers are pleasant and lowland areas in and around Stavanger have the longest in Norway (220 days).

Starting in the 1880s, industry grew in Stavanger, primarily based on treatment and exports of fish and fish-products. The industry was however one-sided which left it vulnerable to changes in demand and was therefore particularly hard hit by the economical depressions between and .

After World War II, the canning-industry hit difficulties. Increased competition from abroad and old machinery led to decrease which was only partially compensated by an increase in shipping and boat-building.

In the 1960s, exploratory oil-drilling in the North Sea changed the situation for Stavanger. It is located close to the oil-fields, and Stavanger with its good harbour and plane-connections was well-positioned to take advantage of the increased activity.

After petroleum-exploration and production became the most important business sector in the Stavanger area during the mid 1970s, business and cultural climate has changed considerably.

The largest oil company in Stavanger is mainly state-owned oil company who have their headquarters located in the suburban area of , located between neighboring and Stavanger.

The city of Stavanger is now running out of land for future development for housing and industry. To rectify this, the administration has approached the neighboring municipalities to propose a merger. This has not been welcomed by in particular . Thus, it seems evident that the growth in the area will take place outside the boundaries of Stavanger.

The NATO Joint Warfare Centre is also located at Jåttå.

Access to Stavanger is provided through the railway, and the road E39 from and E39 north on the west coast, with connection to domestic and international destinations, including , and , a port serving international ferries to Newcastle, UK (planned to close September 2008) and , Denmark. Local ferries goes to and , while fast passenger boats goes to many villages and islands between the main routes from Stavanger to and .

The city has a number of bus services and taxis. There are two tunnel projects planned: and .

Stavanger has one university, the with about 8,000 students. The university was formerly a . It was granted status as on 1 January 2005. [ [http://www.uis.no/about_us/ University of Stavanger - Norway - About us ] ]

The population of Stavanger has a high percentage of university educated with 31.3% of those above 16 years has higher education, compared to the national average of 24.2% (2006 figures) [ [http://www.ssb.no/english/municipalities/hoyre_side.cgi?region=1103 SSB: Figures on Stavanger Municipality ] ]

Stavanger and its region, along with , , has been selected as a for 2008. The "Stavanger2008" vision is expressed through the concept "Open Port". This can be understood both in its English sense - "an open harbour", - and in its Norwegian meaning of "an open gate". Open Port – Openness towards the world. The region and its people is supposed to be even more open and inclusive towards art, ideas and opportunities.

Every May, Stavanger is host to , the Stavanger International Jazz Festival. The International Chamber Music Festival takes place every August. Stavanger was the host port of the in 1997 and 2004.

The largest local football club , plays in the Norwegian Premier League (2007). The club plays its home matches at the football stadium, , which was opened in 2004.

is popular for hiking. Tourists typically visit places like (aka the Pulpit Rock), and . is a massive rock overhanging the fjord (604 meters above). is a rock wedged in the cliff approx. 1000 meters above the fjord. The straight fall 1000 meters down to the fjord makes a very popular location for .

Not too far from Stavanger, alpine centers are ready for skiers and snowboarders throughout the winter season. [ [http://www.basekjerag.com/rogaland/stavanger/svg_base.nsf/id/2CC0E47A17AB6173C1256E150002B1F9?OpenDocument Statistics - Stavanger BASE Klubb ] ]

Along the coast south of Stavanger there are a number of large, sandy beaches, including at Sola is within closest reach from the city. [ [http://www.stavangertravel.com/welcome/beaches.cfm Beaches of Rogaland in west Norway - Stavanger Travel ] ]

Old Stavanger () is located right next to the city centre and has a collection of eighteenth- and nineteenth century wooden structures.

(St. Svithun's cathedral) was built between 1100 and 1125 by the English bishop Reinald in style, and in the late 13th century a new choir was added in Gothic style, with a vaulted roof. Among the old stone churches in Norway, the cathedral in Stavanger is among the best preserved. POV-statement|date=December 2007

The city centre itself is small and intimate, with narrow streets and open spaces protected from car traffic. The open-air vegetable market is one of the very few in Norway where you can buy produce directly from local farmers every working day through the year. Fact|date=June 2007

The is also located in Old Stavanger, commemorating the city's past glory as the capital of Norway. [ [http://www.stavanger.museum.no/default.aspx?ChannelID=1114 Stavanger Museum ] ]

The museum of is one of five archaeological museums in . According to the Museum itself it, "follows a profile of environmental archaeology and interdisciplinary study, with a scientific staff that includes representatives from archaeology, the natural sciences and modern cultural history."

The is located at the harbour. The museum reflects the fact that Stavanger has been Norway's oil capital since oil drilling activities started in the North Sea in 1966. [ [http://www.norskolje.museum.no/hovedframe.htm Norsk Oljemuseum ] ]