Diamond is a bus operator in the West Midlands, formed in 1986 as The Birmingham Coach Company.

The company was created in 1986 as the Birmingham Coach Company operating a single route, 16, in competition with West Midlands Travel.[1] 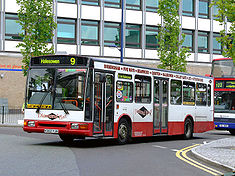 In 2000, Birmingham Coach Company was re-branded as Diamond Bus, replacing many of their existing Leyland Nationals, expanding their network in Birmingham and the Black Country.

The Go Ahead group purchased Diamond Bus in 2005, as well as Peoples Express (formerly Pete's Travel), and integrated the two companies as Go West Midlands, branded as Diamond. This created the second biggest operator in the West Midlands, behind Travel West Midlands.

On 3 March 2008, Go West Midlands was sold to Rotala Group,[2] who also owned Central Connect and North Birmingham Busways. Rotala originally kept the Diamond business separate from Central Connect and Ludlows (purchased later[3]), instead switching a number of routes between the three operators.

In July 2008, new buses were put into service in Redditch on the 57 and 58 routes, branded as Red Diamond. Since then a number of routes in North Worcestershire have been re-branded as Red Diamond,[4] along with new routes in competition with First in Redditch. At the same time new buses were allocated to a number of Black Country routes, branded as Black Diamond.[5]

Ludlows was a bus operator that operated a number of services in Halesowen, West Midlands, England. It operated a varied fleet of around 20 white buses, all of which were low-floor, still unusual for a small company.

In January 2009, Diamond announced that the Ludlows operation was to be integrated with the Diamond operations, with all routes and vehicles moving to the Tividale depot and running under the Black Diamond brand.[6]

The following routes were operated by Ludlows before the takeover.

From 22 January 2007, Diamond were forced to withdraw their evening services on the 57 and 58 routes in Redditch, which were under contract to Worcestershire County Council, due to persistent vandalism and violence on the routes.[7] The company told the council that they would no longer risk operating in the evenings. A month later on the 25 February 2007, Diamond also withdrew the evening services on route 246 between Redditch and Evesham due to low passenger numbers.[8]

On 8 June 2008, the company introduced 57A and 58A journeys alongside their existing 57 and 58 routes, the new journeys would serve the Alexandra Hospital, after rival company First Midland Red withdrew links to the hospital.[9]

The operations in Redditch were rebranded as Red Diamond in July 2008 to coincide with the launch of 6 new buses, with a livery designed to be similar to what was used on Midland Red buses.[10] By September 2008 a further 6 new buses were in operation, along with 10 older buses in the new livery.[11]

In February 2009, Red Diamond won Worcestershire County Council contracts to operate a number of services around Droitwich and Redditch starting in April 2009,[12] these are routes 19 to Meadows Estate, 20 to Westlands, 20A to New Chawston, 137 to Dunhampstead, 140/141 to Bromsgrove and 157 to The Ridings. In addition to this, extra daytime journeys are to be provided on Redditch services 50, 64 and 70. The company will also once again operate evening services in Redditch on routes 55A, 56A, 57 and 58. Service 64 between Bromsgrove and Birmingham will also be renumbered to 144 and re-routed to follow the same numbered service operated by First.[13] Droitwich residents were unhappy about the changes, showing concern about losing the known and respected drivers from the local routes, however, Diamond Bus entered into an agreement with the former operator of the routes, allowing them to continue operating with the same drivers, while Diamond Bus provide the buses and uniforms.[14]

At the Passenger Transport Management Awards in June 2009, Austin Birks, Scott Dunn and John Everill of the company were nominated for awards.[15][16] Austin Birks went on to win the Innovation & New Thinking award,[17] Scott Dunn won the Young Passenger Transport Professional of the Year award[18] while John Everill was runner up for the Marketing award.[19] Additionally, Trevor Hickinbottom won an Unsung Heros award for dedication to the industry over the previous 38 years.[20] 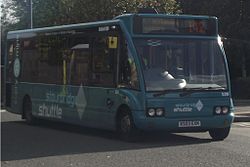 The Dennis Darts displaced from this service have replaced older ones which have since been withdrawn and sold to other companies.

This brand has since been discontinued.

Diamond rebranded the 002 service from Merry Hill to Weoley Castle with an all-new green livery featuring the name "The Double O-2" on them, playing on the pronunciation in the local area.

This service runs every 15 minutes stopping at Newman College, Bartley Green and Halesowen on the way to Merry Hill from Weoley Castle.

The Dennis Darts displaced from this service have replaced older ones which have since been withdrawn and sold to other companies.

This brand has since been discontinued. 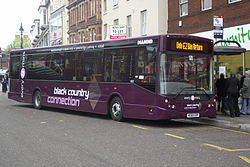 These buses displaced the Black Diamond branded buses which 2 have transferred to Wessex Connect and the rest have been cascaded to other routes, e.g. the 56. 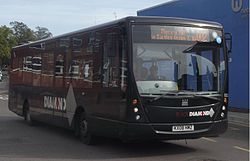 In 2008, upon takeover by Rotala, Diamond started to "localise" their operations. In the Black Country, this ment that the brand became Black Diamond with 20 new Plaxton Centros (8 of which have moved to Wessex Connect since due to service cuts.). These were new for the 401, 402, 404B, 404E and 404H.

Most of the routes these buses were new for have since either had new buses (404E), withdrawn (404B/H) or had older stock transferred to them (401/2).

However, since then, service 56 has gained the existing Plaxton Centros.

In a working partnership with Worcestershire County Council, a new fleet of Red Diamond bus services are beginning to operate in Redditch, Worcestershire. These buses are mainly Diamond owned Wright Eclipse/Volvo B7RLE but there have been several re-painted Dennis Darts/Wright DAFs in operation. 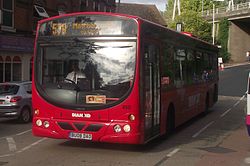 In 2008, upon takeover by Rotala, Diamond started to "localise" their operations. In Redditch, this ment that the brand became Red Diamond with several new Wright Eclipse Urban bodied Volvo B7RLEs.

From 31 August 2008, Diamond Bus stepped up their operation of commercial and non-commercial services in Redditch significantly, to the point where they now operate more buses in Redditch than main rival First.

Services 55A/56A are introduced in competition with the 55/56 routes, however will divert via Batchley. The frequency of this route is every 15 minutes, which is actually more frequent than the First Midland Red service.

They also introduced a ten minute frequency on route 51 through to Batchley.

In November, Diamond will again step up the competition against First, by re-routing the 55A/56A in Webheath and Oakenshaw and introducing an evening and Sunday service on these routes. Diamond will also match the 20 minute Sunday frequency on route 51.

In 2010, amid much criticism of the poor performance of the existing buses from Worcestershire County Council and passengers, Diamond brought 9 MCV Evolutions for services 362, 363 and 382

Along with this, all the Redditch and Worcester depot Dennis Dart allocations have been repainted into Red Diamond Livery.