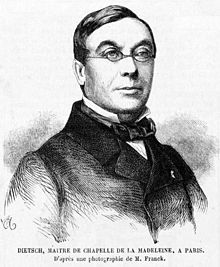 Fétis has reported that Dietsch was a choirboy at the Dijon Cathedral, and beginning in 1822 studied at Choron's Institution Royale de Musique Classique et Religieuse in Paris. Later, after 1853, Dietsch was a teacher at the Ecole Niedermeyer (successor of Choron's Institution), a position he held up until his death. In 1830 Dietsch entered the Paris conservatory and studied with Anton Reicha.[1] His subjects included double bass and counterpoint (with Reicha).[citation needed]

Dietsch composed church music as well as an opera Le vaisseau fantôme, ou Le maudit des mers ("The Fantom Ship, or The Accursed of the Sea"), which was first performed on 9 November 1842 at the Paris Opera. The libretto by Paul Foucher[citation needed] and H. Révoil was based on Walter Scott's The Pirate as well as Captain Marryat's The Phantom Ship and other sources, although Wagner thought it was based on his scenario for Der fliegende Holländer, which he had just sold to the Opera. The similarity of Dietsch's opera to Wagner's is slight,[citation needed] although Wagner's assertion is often repeated. Berlioz thought Le vaisseau fantôme too solemn, but other reviewers were more favourable.[1]

In 1840 Dietsch had become chorus master at the Paris Opera on Rossini's recommendation.[citation needed] He took over from Girard as conductor in 1860, but nonetheless could not avoid run-ins with the greatest composers of his day: Wagner blamed the fiasco of the Paris Opera premiere of Tannhäuser (1861) on the conductor, and in 1863 Dietsch resigned over a dispute with Verdi in the midst of rehearsals for Verdi's Les vêpres siciliennes.[1]