The Big Red One

The Big Red One 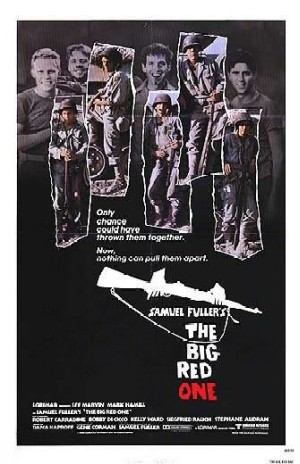 "The Big Red One" is a written and directed by . The film portrays the horrors of war as it affects the men on the front lines. It was heavily cut on its original release, but a restored version was premiered at the in 2004, seven years after Fuller's death. The Big Red One is the nickname of the 1st Infantry Division, organized in 1917.

Fuller saw a great deal of action in as a member of the , which was nicknamed "The Big Red One" for the red numeral "1" on the Division's shoulder patch.

The film starts at the end of the First World War with the Sergeant (Lee Marvin) attacking a surrendering German soldier. As he stabs the man, the camera moves away from the action and towards a life-size wooden in the background. As we get closer we see that while the soldiers are fighting, is on the cross.

When the Sergeant returns victorious to his company's s he is told that the war ended hours ago and that the German was trying to surrender when Lee attacked him. Killing versus murder is a theme that repeats throughout the film.

The film cuts to the Sergeant decades later as he leads a squad of men through , , then on to the landings, where The Big Red One lands on at the start of the . The squad then treks though , ending up at the liberation of Falkenau concentration camp (a subcamp of Flossenbürg) in . The story's focus is on the four enlisted men (and the Sergeant) who survive the war from beginning to end with their sergeant, becoming known as "The Sergeant's Four Horsemen."

Midway though the film the Sergeant crosses the same field where he stabbed the German decades before, but now contains a memorial:

The body of the movie consists of a series of episodes highlighting the insanity and grotesqueness of war. The liberation of the concentration camp brings this to a peak, but also suggests there may be reasons that this madness is necessary.

At the end of the film, the sergeant is in the forest, at night, having just buried a young boy he had befriended after liberating a concentration camp. A German soldier approaches, attempting to surrender, and the sergeant stabs him. His young soldiers then arrive and inform him that the war has ended. This time, the sergeant and his young soldiers work frantically to save the life of the wounded German soldier. The last words heard are one of the soldiers saying the German will survive, giving an optimistic tone to the ending.

*The Sergeant (). Marvin enlisted in the US Marine Corps at the beginning of WWII. In the battle of Saipan in June 1944, he was wounded in the buttocks by Japanese fire which severed his . He received a medical discharge. [ [http://www.imdb.com/name/nm0001511/bio Lee Marvin - Biography ] ]

was strongly interested in filming "The Big Red One" in the late 50's to early 60's sending Fuller on a trip to Europe to scout locations and also had him film "" as a dry run for the film. When Fuller argued with and his studio over cuts they made to "Merrill's Marauders" the plans to film "The Big Red One" were dropped. [ Fuller, Samuel "A Third Face" Alfred A. Knopf (2002)] Ironically, the company that ended up producing the film, , would be acquired by WB and thus they own the rights to the film today.

Sam Fuller, who wrote and directed the film, served in the 1st infantry division in World War II, and was present at the liberation of Falkenau concentration camp. [ Fuller, Samuel "A Third Face" Alfred A. Knopf (2002)]

Originally, the film was to have been made with John Wayne starring as The Sergeant but Fuller felt that he would not have been right for the role. [ Fuller, Samuel "A Third Face" Alfred A. Knopf (2002)]

*imdb title|id=0080437|title=The Big Red One
* [http://unlikelystories.org/schneider1206b.shtml Review of the Reconstruction]