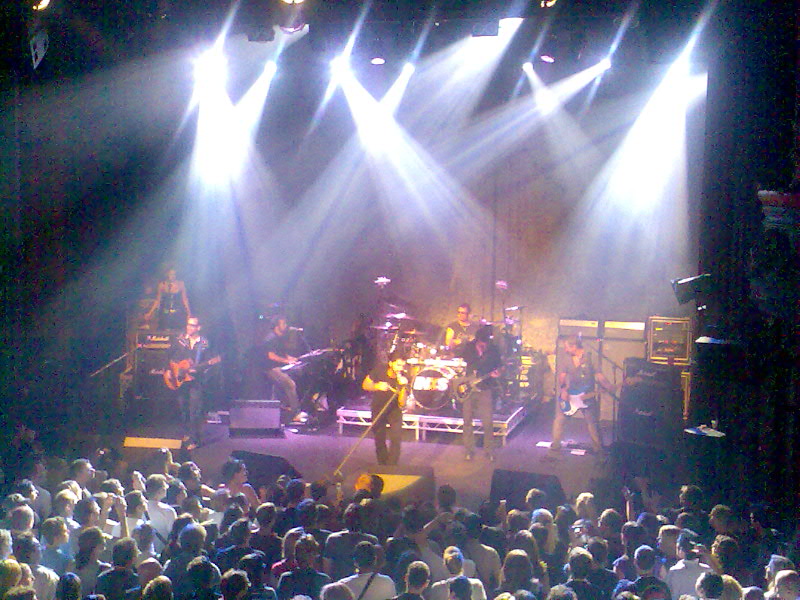 INXS (pronounced "in excess") are an n rock and New Wave group. The band was formed on , in , .

INXS began under the name The Farriss Brothers, which was created at Davidson High School, , and originally consisted of , , , , , and .

With the -produced fourth album, "" in 1984, the band received more significant attention from around the world, as "Original Sin" (produced by ) became their first #1 single and a highly popular song worldwide with fans and reviewers.

INXS performed five songs for the 1985 concert; "Original Sin", "Listen Like Thieves", "Kiss the Dirt", "What You Need", and "Don't Change". It was broadcast in Australia on both and , and on in the US.

By 1985's breakthrough album "Listen Like Thieves", the band had perfected a matured sound influenced by and , but true to the band's original roots in the Aussie pubs. "Listen Like Thieves" was highly approved of by critics. [cite web|url=http://www.rollingstone.com/artists/inxs/albums/album/148097/review/5944088/listen_like_thieves |title=INXS: Listen Like Thieves|publisher=""|author=Parke Puterbaugh|date= |accessdate=2008-03-07] In the US the first single, "This Time", stalled at #81 in late 1985, but the band roared out of nowhere with the second, "What You Need", which in early 1986 became a Top-Five Billboard hit, bringing INXS their first breakout U.S. success. The song was also a Top-20 hit in Canada and reached #2 in Australia. INXS played for and of Wales at a concert in Australia. This show was filmed and later released on home video entitled "Rockin' The Royals". An edited version of the concert was played on (USA) in 1986 on their Saturday night concert series.

In 1986, INXS recorded two songs with , an cover "Good Times" and "Laying Down The Law", which Barnes co-wrote with and . "Good Times" was used as the theme song for the series of concerts that toured the country in the summer of 1986 - 87. Australia Made was the largest touring festival of Australian music talent that had ever been attempted to that point. INXS and Barnes headlined and the rest of the line-up featured , , Models, The Saints, and . The shows began in on and concluded in Sydney on Australia Day, . A concert film of this event was made by and released later that year [http://www.imdb.com/title/tt0199342/] . "Good Times" peaked at No. 2 on the Australian chart and several months later was featured in the film "", allowing it to chart Top 40 in the US.

The band's worldwide peak of popularity came with 1987's "Kick", an upbeat, confident album that yielded four Top-10 US singles and several international hits, including "", "", "Devil Inside", and the #1 "". They toured heavily behind the album throughout 1987 and 1988. The video for the 1987 INXS track "Mediate" (which played after the video for "Need You Tonight") duplicated the format of Bob Dylan's video for "," even in its use of apparently deliberate errors.

In 1989, Hutchence collaborated with Ollie Olsen and made an album titled MAX Q "Max Q", which received decent reviews, but at best attained a cult status. This was due largely to the failure of the record company to promote it in the way it deserved.The rest of the band also took a break to work on side projects, but soon returned to the studio to record their follow-up album titled X.

However, the band had a lot of pressure on its shoulders due to fans and critics alike having high expectations about the follow-up album to Kick. In 1990, INXS released "X". It followed in the same vein as "Kick", and added to some songs, but critics and fans considered it a weak follow-up. Nevertheless, "X" did score two hits in "" and "Disappear" (both Top-10 in the US), and was a Top-5 hit album internationally.

INXS performed at Wembley Stadium on , , during their "Summer XS" tour stop in to a sold out audience of 72,000 fans. During this show, INXS organized a film crew to shoot their show onto video to come out simultaneously as their live album "" (the video was also called "Live Baby Live"). [Note: Name is said Live (as in "to live your life") Baby Live (as in a live performance).]

1992's "" was an experimental album using sitars and a 60-piece orchestra while adding a much more "raw" sound to their music. It received good critical reviews and went number one in the UK & and number two in Switzerland, but had difficulty finding an audience in the U.S.

1993's "" received mixed reviews and included a track called "Please (You Got That)" which featured the legendary and title track with . The band made a full video album for the record using unknown Australian students to direct with help by . "Full Moon, Dirty Hearts" was the last record under INXS' contract with Atlantic.

The band took time off to rest and be with their families. Michael Hutchence remained in the public eye through modeling and film acting. His personal life included dating several models and public personalities including , and .

Throughout the 1980s and into the 1990s, INXS was a major force in Australian popular music, leading the way into worldwide popularity for several Australian bands. The band worked closely with several other Australian artists, such as and ex-patriate New Zealander Jenny Morris, helping to establish their careers. By the mid-nineties, however, their popularity had waned, especially in the US, where their "Greatest Hits" compilation failed to reach the Top-100. At the 1996 , Michael Hutchence presented Oasis with an award, after which their characteristically arrogant lead singer remarked "Has-beens shouldn't be presenting awards to gonna-bes". [cite web|url=http://news.bbc.co.uk/2/hi/in_depth/entertainment/2000/brit_awards/665776.stm |title=Brits behaving badly|publisher=|date= |accessdate=2008-03-05] In 1997, the group released a comeback album titled "", which garnered mixed reviews. It fared respectably in Australia, , France, (where INXS had ironically more success in the 90s than in the 80s), Sweden and Switzerland. A sidenote is that Michael Hutchence and Andrew Farriss were asked about the backing vocals on the title track for the new album, with the interviewer swearing it sounded like "I'm better than Oasis."

On 22 November 1997, Hutchence was found dead in a hotel room under suspicious circumstances. The coroner who performed his autopsy ruled his death a . Some speculate his death was actually an accident, the result of . [cite web | url=http://news.bbc.co.uk/2/hi/entertainment/416509.stm | title=Paula challenges Hutchence verdict | date= | publisher= | accessdate=2008-03-05]

Since Hutchence's death, INXS continued, using Terence Trent D'Arby, and as temporary lead singers. er, "Celebrity Treasure Island" host and former lead singer of Australian band , began singing with INXS in 2000. INXS played as one of the headline acts at the Sydney . Stevens was officially named a member of the band in 2002. However, he left INXS in 2003 to pursue a solo career, only recording a contractual obligation song called "", released as a single (which charted in the Top-100 on the Australian ARIAnet Singles Chart) in the same year. The song was also used in the 2003 and the "EA Sports Rugby 2004" video game.

In 2001, INXS was inducted into the Hall Of Fame. In total, the band has received three nominations over their 30-year career.

INXS returned to the news in 2004 when it was announced that a new program titled ' would feature a contest to find a new lead vocalist for the band. The show, which had its debut on the network 11 July 2005, (on Global in Canada, in the UK and in Australia), featured 15 contestants vying for the position of lead singer. The show was executive produced by "Survivors and hosted by and former and guitarist .

On 20 September 2005, (born Jason Dean Bennison, but uses his mother's maiden name of Fortune) of , won the eleven-week competition, which culminated in his singing the 's "" and INXS' "What You Need" in the finale of the show to become the new lead singer of INXS. He has recorded the new album with producer and went on a world tour with INXS in 2006. Runner-up was the opening act during leg one of the world tour, along with his band, The . [cite web|url=http://www.rockbandlounge.com/rock-star-inxs/jd-fortune.asp |title= J.D. Fortune :: Rock Star INXS|publisher=Rock Band Lounge|accessdate=2008-03-05]

During the "Rock Star: INXS" competition, the contestants were challenged to write the lyrics and melody to music written by . Originally this challenge was divided up into two teams. When Fortune did not see eye-to-eye with his team (that included Casey), he decided to venture out on his own and write his own lyrics. At first Fortune's move seemed to have doomed his chances to win the competition (because it was perceived he couldn't work in a team), but it was this move that resulted in his creation of the lyrics to "Pretty Vegas". This song became a favourite of both fans and INXS and played a major role in Fortune being able to win the competition Fact|date=February 2007. This single was released 4 October 2005 and reached #5 on the ranking of top downloaded songs on its first day, debuted on the Billboard Hot 100 chart at #37, and became a huge radio airplay hit in Fortune's native Canada.

On , the band's first album in eight years was released, entitled "Switch". It was released in the United States via . Shortly after, in September 2006, the band and Epic parted ways. [cite web|url=http://www.billboard.com/bbcom/search/google/article_display.jsp?vnu_content_id=1003123856 |title=Sudden 'Switch': INXS Parts Ways With Epic|publisher=""|author=Jonathan Cohen|date= |accessdate=2008-03-05]

After the success of the "Switched On World Tour", the band is currently working on their new album. has stated that he is writing new material on the road. One such song is called "Angel Skin" which talks about a man descending to Hell. Other demos of songs that have been written include "Death of an Elephant", "Lullaby", "Everybody Says Goodbye" and "Product of the System". [ [http://jam.canoe.ca/Music/Lowdown/2006/11/27/2516748-ca.html CANOE - JAM! Music - Karen Bliss's Lowdown: Insider Canadian music news: INXS frontman pens new album ] ] Fortune has not confirmed whether the band has a new label worldwide or not.

In 2007, the Farriss Brothers were inducted into the Hall of Fame.

In August, 2007, INXS has reported what is termed as a "medical issue" on Garry Beers' hand. This announcement came at the cancellation of an , 2007 show in , in which [INXS.com] stated "Due to ongoing medical issues with Garry Beers' hand, the band's doctor has urged the band to not play more than three shows in a row or risk permanent damage to Garry's hand." [ [http://www.inxs.com/news/news.php?uid=2319 INXS.com news.new ] ]

According to the , INXS have sold 15 million units in the United States alone, becoming the 3rd highest selling Australian Music Act in the United States, behind AC/DC and The Bee Gees. [ [http://www.riaa.com/goldandplatinumdata.php?resultpage=2&table=tblTopArt&action= RIAA Website Units Sold List] retrieved 29th December 2007]

Whilst in Australia "" has been used by Insurance on and off for 8 years.

"For a complete discography, see ."