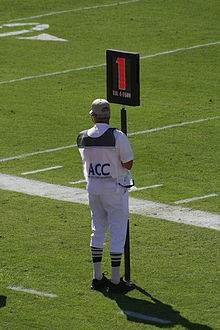 A down is a period in which a play transpires in American and Canadian football.

Down is also an adjective to describe the condition of the player with possession of the ball after he has been tackled or is otherwise unable to advance the ball further on account of the play having ended (e.g., "He is down at the 34 yard line").

It may also refer to the ball after it is made dead in one manner or another. The line of scrimmage for the next play will be determined by the position of the ball when it is downed.

Each possession begins with first down. The line to gain is marked 10 yards downfield from the start of this possession, and the situation is described as "1st and 10" (if the goal line is less than 10 yards downfield, then the goal line is the line to gain and the situation is "1st and goal"). If the offensive team moves the ball past the line to gain, they make a new first down. If they fail to do this after a specified number of downs (four in American play and three in Canadian play), the team is said to turn the ball over on downs, and possession of the ball reverts to the opposing team at the spot where the ball was downed at the end of the last down.

When the offensive team has not yet made a first down before reaching the final down, the team faces a last down situation (third down situation in Canadian play and fourth down situation in American play), where the team is forced to decide whether to either scrimmage the ball in an attempt to pick up the first down (this is called going for it [on fourth down]), or alternatively to kick the ball (either by punting or making a field goal attempt). Though statistical analysis of games suggest playing more aggressively is the better option,[1] kicking the ball is typically seen as the safer solution; scrimmaging may lead to a turnover on downs, potentially giving the ball over to the other team with good field position.

If recovering the ball in one's opponent's end zone (following a kick-off in American football, and following any kick into the end zone, except for successful field goals, in Canadian football), a player may down the ball by dropping to one knee (note that in Canadian play, doing so scores a single for the opposing team). A player in possession of the ball will down the ball if he fumbles it out of bounds. If a quarterback is running with the ball during his initial possession of the same play following the snap, he may down the ball by voluntarily sliding from his feet to a sitting or recumbent position - this is to protect the quarterback from injury. In the NFL, the quarterback is the only player for whom falling down in this way automatically stops play.

In the early 19th Century in rugby football, the ball became dead in the field of play only by mutual consent of opponents. A player carrying the ball and held by opponents would say, "Held!", and his opponent would say, "Have it down." That is, the ballcarrier would declare himself fairly held, unable to advance, and an opponent would call on him to put the ball down, initiating the scrimmage. In modern rugby league, this is called a tackle and each team has six tackles to score; if they fail then possession changes over to the other team.

In American football, the concept of the act of having the ball down gave rise to "down" as the condition of the player so obligated, and the ball carrier could call for a "down" voluntarily. Although NCAA rules have effectively abolished this (as the ball carrier dropping to the ground immediately ends the play), other codes for North American football, such as the NFL, still allow (as one way for the ball to become dead) for the runner to cry "down".

Eventually the rules officially applied the word to include all of the action from the time the ball was put into play (whether by snap or free kick) until it became dead. "play".

Three and out is an American football term used to describe a situation in which a team, after starting an offensive possession, executes three plays and fails to get a first down, thereby in most cases forcing them to punt or if close enough, attempt a field goal. This is comparable to "three strikes you're out" in baseball.

The term comes from the fact that the offensive unit only has three "real" plays before they are expected to punt. While in theory, a team is allowed a fourth play, this usually does not apply, as using the fourth down to execute a play is a risky move under most circumstances. If they fail to convert to a new first down on a fourth down play, the opposing team will be allowed to take over possession at the stop where they left off, giving them better field position than if the ball is punted farther toward the opposing team's end zone.

In Canadian football, since there are three downs instead of four, the term "two and out" is used in this situation.