The region is administered by Subprefecture of Sé encompassing the neighborhoods and districts Bela Vista, Bom Retiro, Cambuci, Consolação, Aclimação, Bras, Liberdade, República, Sé and Santa Cecília. Not to be confused with the region known as Downtown Expanded, used eventually by the city government in actions urban planning, which also includes parts of the subdistricts of the Mooca, Lapa, Pinheiros and Vila Mariana or with Historic Center São Paulo Which includes only the oldest part of the central region.

The region is since the 1970s one of the largest Financial Districts of South America and Latin America.

Officially, the central area is bounded by districts of Municipality Cathedral. However, the social perception of what is called "center of Sao Paulo" varies and may include other areas of city. Until the creation of the administrative office of the Cathedral, the notion of "center" was equivalent to the region of the former Administration Regional Office, who also included the districts of Bras and Pari - Currently covered by an Municipality of Mooca - Interpretation is also found today. The concept of a central area of São Paulo, however, is wider depending on the study is done about the region and may include items such as financial centers Paulista Avenue and Berrini.

To Villaça, called "area of concentration in the layers of high-income" region of the city that encompasses all centralities that are historically called" center "and whose images are from time to time ideologically linked to the very image of city. This region, which could be understood as the metropolitan center of São Paulo, is also called "vector-west" and concentrates most of income, The jobs and state action in the city.

The total population of the area that includes city hall, the Camara Municipal, or city representatives chamber, Bela Vista, Cerqueira Cesar, Republica, Santa Cecilia, Consolacao, Higienopolis, Campos Eliseos, Luz, Bom Retiro, Bras, Pari, Belem, Santa Ifigenia, Santa Cecilia, Higienopolis, 25 de Marco Street, Parque Dom Pedro, and the Cathedral region, is, according to the 2000 census, 374,002 inhabitants, with an average income of R$ 2335.54, and it is the least populated administrative region in the city, albeit one with a wider range of public facilities and jobs. According to IBGE and SEADE statistics, each year the central area of São Paulo has a rate negative of population growth that reaches 5% per year.[1][2] This factor contributed to what has been called degradation the region, as some experts in urban studies, with the removal of the São Paulo elite of the central areas, occurs along the removal of public stewardship, leading to a sense of abandonment. Despite showing an average income higher than that of other regions of city,it has many homeless individuals and pockets of poverty, as the region of Cracolândia—crackhead land—which has recently been undergoing a process of revitalization by the city. It has also been accused of promoting "social hygiene" through gentrification.

The point of intersection of the city's main thoroughfares, and also the region most well-served by public transportation in the city, being served by all subway lines, except for Line 5. It is also home to some of the major institutions of higher education in the city, as Mackenzie University, The Armando Alvares Penteado Foundation (FAAP) and units of the University of São Paulo (USP), like Law School, The University Center on Maria Antonia Street, and the headquarters of the USP Post-Graduate School of Architecture and Urban Affairs.

Panoramic the terrace of Mirante do Vale, highlights the Edifício Itália 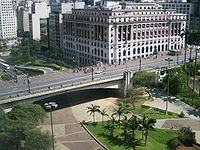 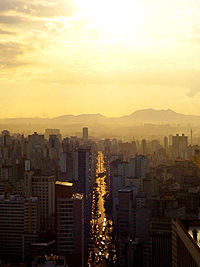 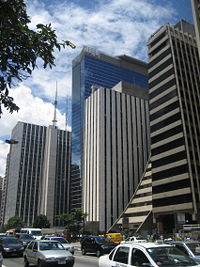 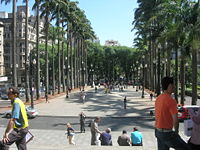 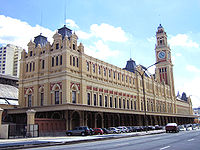 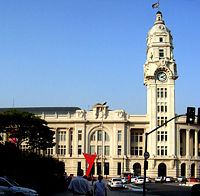 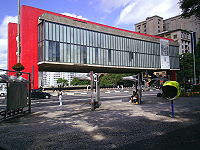 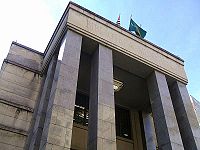 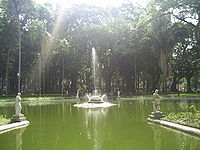 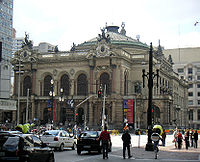 Buildings that have been the first major structures of the region

The panoramic view from Central Zone São Paulo, is undoubtedly the Torre Banespa located at Altino Arantes Building, where you can see the entire region, which attracts many visitors.

The Torre Banespa is one of the highlights of Altino Arantes Building and São Paulo. Situated on the highest point of the building, accessible from the 34th floor, it provides a privileged view of the city, with a range of up to 40 kilometers, making it possible to see other city landmarks such as the Mercado Municipal, the São Paulo Cathedral, and even the buildings Italia, and Copan Hilton. The Mirante do Vale completed in 1960, and although not well known, is still the tallest building in Brazil. In addition to several neighborhoods. This is all possible as well, although not the tallest, it's located in the topographically highest point of Central Zone São Paulo.

View of buildings, Mirante do Vale, Banco do Brasil and Edifício Itália.