Historically, medical research and the practice of medicine tended to rely on an acute care model for the treatment of all medical problems, including chronic illness (Wagner et al. 2001). More recently, the medical field has begun to look at long term care plans to treat patients with a chronic illness. This shift in ideology, coupled with increased demand for evidence based medicine and individualized care, has led to the application of sequential decision making research to medical problems and the formulation of dynamic treatment regimes.

The figure below illustrates a hypothetical dynamic treatment regime for Attention Deficit Hyperactivity Disorder (ADHD). There are two decision points in this DTR. The initial treatment decision depends on the patient's baseline disease severity. The second treatment decision is a "responder/non-responder" decision: At some time after receiving the first treatment, the patient is assessed for response, i.e. whether or not the initial treatment has been effective. If so, that treatment is continued. If not, the patient receives a different treatment. In this example, for those who did not respond to initial medication, the second "treatment" is a package of treatments—it is the initial treatment plus behavior modification therapy. "Treatments" can be defined as whatever interventions are appropriate, whether they take the form of medications or other therapies. 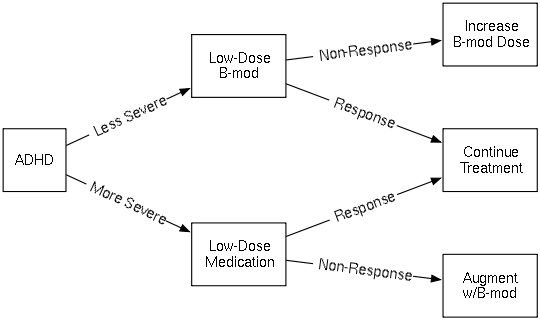 Example of a dynamic treatment regime

The decisions of a dynamic treatment regime are made in the service of producing favorable clinical outcomes in patients who follow it. To make this more precise, the following mathematical framework is used:

For a series of decision time points,

where E is an expectation over possible observations and rewards. The quantity E[R | treatments are chosen according to π] is often referred to as the value of π.

In the example above, the possible first treatments for A1 are "Low-Dose B-mod" and "Low-Dose Medication". The possible second treatments for A2 are "Increase B-mod Dose", "Continue Treatment", and "Augment w/B-mod". The observations O1 and O2 are the labels on the arrows: The possible O1 are "Less Severe" and "More Severe", and the possible O2 are "Non-Response" and "Response". The rewards R1,R2 are not shown; one reasonable possibility for reward would be to set R1 = 0 and set R2 to a measure of classroom performance after a fixed amount of time.

For example a treatment may be desirable as a first treatment even if it does not achieve a high immediate reward. For example, when treating some kinds of cancer, a particular medication may not result in the best immediate reward (best acute effect) among initial treatments. However, this medication may impose sufficiently low side effects so that some non-responders are able to become responders with further treatment. Similarly a treatment that is less effective acutely may lead to better overall rewards, if it encourages/enables non-responders to adhere more closely to subsequent treatments.

While this type of data can be obtained through careful observation, it is often preferable to collect data through experimentation if possible. The use of experimental data, where treatments have been randomly assigned, is preferred because it helps eliminate bias caused by unobserved confounding variables that influence both the choice of the treatment and the clinical outcome. This is especially important when dealing with sequential treatments, since these biases can compound over time. Given an experimental data set, an optimal dynamic treatment regime can be estimated from the data using a number of different algorithms. Inference can also be done to determine whether the estimated optimal dynamic treatment regime results in significant improvements in expected reward over an alternative dynamic treatment regime.

Experimental designs of clinical trials that generate data for estimating optimal dynamic treatment regimes involve an initial randomization of patients to treatments, followed by re-randomizations at each subsequent time point to another treatment. The re-randomizations at each subsequent time point my depend on information collected after previous treatments, but prior to assigning the new treatment, such as how successful the previous treatment was. These types of trials were introduced and developed in Lavori & Dawson (2000), Lavori (2003) and Murphy (2005) and are often referred to as SMART trials (Sequential Multiple Assignment Randomized Trial). Some examples of SMART trials are the CATIE trial for treatment of Alzheimer's (Schneider et al. 2001) and the STAR*D trial for treatment of major depressive disorder (Lavori et al. 2001, Rush, Trivedi & Fava 2003).

SMART trials attempt to mimic the decision-making that occurs in clinical practice, but still retain the advantages of experimentation over observation. They can be more involved than single-stage randomized trials; however, they produce the data trajectories necessary for estimating optimal policies that take delayed effects into account. Several suggestions have been made to attempt to reduce complexity and resources needed. One can combine data over same treatment sequences within different treatment regimes. One may also wish to split up a large trial into screening, refining, and confirmatory trials (Collins et al. 2005). One can also use fractional factorial designs rather than a full factorial design (Nair et al. 2008), or target primary analyses to simple regime comparisons (Murphy 2005).

A critical part of finding the best dynamic treatment regime is the construction of a meaningful and comprehensive reward variable, Rt. To construct a useful reward, the goals of the treatment need to be well defined and quantifiable. The goals of the treatment can include multiple aspects of a patient's health and welfare, such as degree of symptoms, severity of side effects, time until treatment response, quality of life and cost. However, quantifying the various aspects of a successful treatment with a single function can be difficult, and work on providing useful decision making support that analyzes multiple outcomes is ongoing (Lizotte 2010). Ideally, the outcome variable should reflect how successful the treatment regime was in achieving the overall goals for each patient.

Analysis is often improved by the collection of any variables that might be related to the illness or the treatment. This is especially important when data is collected by observation, to avoid bias in the analysis due to unmeasured confounders. Subsequently more observation variables are collected than are actually needed to estimate optimal dynamic treatment regimes. Thus variable selection is often required as a preprocessing step on the data before algorithms used to find the best dynamic treatment regime are employed.