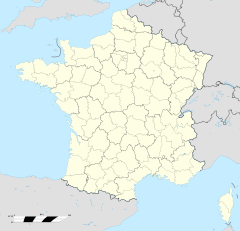 Location of Gorges in Normandy 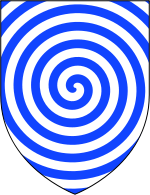 Original armourials of Gorges, with heraldic gurges or whirpool: Argent, a gurges azure. These arms were used continuously by the senior line at Tamerton Foliot, but were dropped by the first Baron Gorges in favour of the arms of Morville, which latter he is recorded as having used at the Siege of Caerlaverock in 1300[1]

The House of Gorges is an ancient English family with Norman origins. Radulph, Lord of the Château de Gorges (or in French, Seigneur Radulph de Gorges) came over to England from Gorges in the canton of Périers in Normandy in the army of William the Conqueror in the year 1066 and acquired a knighthood. He had thus started the history of the noble family of Gorges in England. His descendant Roul married the heiress of Morville and afterwards the family obtained the manors of Wraxall, Somerset and Bradpole in Dorset. The family again reached prominence in the 16th and 17th centuries. [2]

History of the family

After the Battle of Hastings Norman liege Radulph de Gorges de Meurville obtained a knighthood. His descendant Roul de Gorges married the heiress of Morville in England, obtaining afterwards the manors of Wraxall, Somerset and Bradpole in Dorset.

Radulph's great-grand son Ralph de Gorges was marshal of the army of King Edward I in the wars in Gascony in 1293, and was in opposition to Piers Gaveston, 1st Earl of Cornwall. He was summoned to Parliament as Baron Gorges by writ between 1308 to 1322 and is mentioned in the Nomina Villarum 1315-16.

This was a large manor returned as 3 knights' fees in the Testa de Nevill.[3] The de Morville family held Knighton in the 12thc. Local legend associates Knighton with Hugh de Morville, Lord of Westmorland (d.1202)' one of the 4 knights who murdered Thomas a Becket Archbishop of Canterbury in his cathedral on 29/12/1170, and is said to have fled after the murder to Knighton. However, this is not supported by reliable historical evidence which states that Hugh fled first to Saltwood Castle near Canterbury, and thence to de Morville's Knaresborough Castle in Yorkshire. The era is too early to seek evidence in shared armourials, heraldry not having become widespead until the early 13th. c., but it appears the two families sprang from a common 11th.c. source, not clearly documented.[4]In the 13th c. Eleanor, heiress of John (or Ivo) de Morville (d.1256), married Ralph de Gorges[5]Eleanor died in 1292, still seized of the manor, having outlived her husband. Her son Ralph de Gorges leased the manor in 1305 to William de Caleshale and his wife for the duration of their lives. Before 1316 the manor had reverted to Ralph de Gorges, knighted sometime thereafter.[6]

The family of Gorges was associated with the manor of "Tothill". It cannot be stated with certainty where this was located. There appear to be two possibilities:

Ralph, 1st Baron Gorges had a son, Ralph, 2nd Baron Gorges, and 3 daughters, Elizabeth, Eleanor and Joan. He appears to have married off his 2nd. daughter Eleanor to the young Theobald Russell(1303-1340) of Yaverland, Isle of Wight and Kingston Russell, Dorset, son and heir of Sir William Russell(d.1311), who was possibly his ward. Ralph I, 1st Baron previously had settled the manor of Knighton in tail-male on two younger sons, William and Theobald, of his daughter Eleanor, wife of Theobald Russell. [9] William Russell the elder of the two died without issue and Knighton Manor was delivered to Theobald in 1343[10]

Ralph, 2nd Baron Gorges, who died without issue in 1330/1, shortly after his father's death, clearly keen to see his family name and armourials continue, formed the plan of bequeathing the Gorges estates to a younger son of his sister Eleanor Russell, on condition apparently that he should adopt the name and arms of Gorges. This is precisely what occurred when Theobald Russell II, 3rd son of Theobald and Eleanor, his 2nd elder brother William having died, adopted the name Gorges, and founded a revived Gorges line, which flourished, based at Wraxall, Somerset. In 1346/7 Theobald was sued in the name "de Gorges" by Elizabeth, widow of his uncle Ralph, 2nd Baron Gorges(d.1331), for the manor of Knighton. Judgement was given in her favour,[11] but as she had no issue by Ralph the manor had reverted to Theobald by 1362. [12] On the death of Theobald in 1380, the manor of Knighton, less a dower interest of 1/3, passed successively to his sons Sir Randolf(Ralph?)(d.1382), Bartholomew(d.1395/6) and Thomas(d.1404),[13] all of whom chose to use the Gorges family name alone. Theobald's widow Agnes, presumably the mother of the 3 sons, died in 1400, when her customary dower share of 1/3 reverted to Thomas.[14] Thomas left a son John, who died in 1413 aged only 15, leaving his 10 year-old brother Theobald as heir. In 1462 Sir Theobald Gorges was in possession of Knighton, and probably died without issue as the manor of Knighton reverted back via the Russell family to John Haket(d.1498) of Wolverton, Isle of Wight, 1st cousin & heir of Thomas Russell(d.1431) son of Sir Maurice Russell(d.1416).[15] 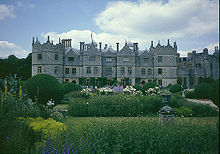 In the 16th century Thomas Gorges (1536–1610), a son of Sir Edward Gorges of Wraxall, Somerset, by either Mary Newton or Mary Poyntz, a kinsman and courtier of Queen Elizabeth I, acquired the manor of Langford, now Longford, in Wiltshire in 1573 and built there Longford Castle. His wife was a Swedish noblewoman, Helena Snakenborg, marchioness (through her first marriage) of Northampton. Due to her influence, Swedish-style architecture was adopted in the construction of Longford Castle. Helena's mother was a descendant of Agnes of Borgarsyssel, a natural daughter of Haakon V of Norway. Helena has a remarkable monument in Salisbury Cathedral.

Edward, son of the above-mentioned Thomas Gorges of Langford, was granted the Barony of Dundalk in Ireland. Both he and his son Richard (d.1712) sat in the Irish Parliament for the constituency of Ratoath. The Barony became extinct on the death of the 2nd Baron in 1712, even though the latter seems to have had a son. The tomb of the 2nd Baron of Dundalk can be seen at Stetchworth, St Peter in East Cambridgeshire 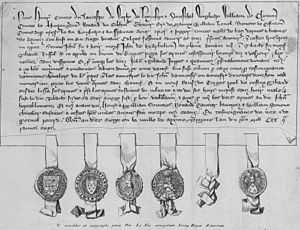 Award of a court of honour convened before Calais in 1347 in the matter of Warbleton vs. Gorges. MS Ashmole 1137, f.143r, Bodleian Library

Arms of de Morville Lozengy or and azure. These arms were adopted by the 1st Baron Gorges before 1300 in lieu of his paternal arms of the Gurges

New armourials of Theobald Russell "Gorges" adopted in 1347, known as "Gorges Modern": Lozengy or and azure, a chevron gules

In 1341 Theobald Russell "de Gorges” adopted the Gorges arms used by his uncle and grandfather, that is to say those taken from their de Morville heiress who brought them Wraxall. In 1347 he was challenged by Sir John Warbleton (or Warburton), a knight from Cheshire who happened to be serving with him at the Siege of Calais, who noticed they both bore the same arms on their shields, "Lozengy or and azure" (a field of gold and blue lozenges). The case was brought before a court of honour convened at Calais and presided over by Henry of Grosmont, Earl of Lancaster which adjudged on 19th July 1347 the disputed arms to Warbleton. Theobald Russell "de Gorges" thus added a "chevron gules" (red chevron) to the de Morville arms as a difference, in order not to contravene the judgement. Thus the new Gorges arms, known as Gorges Modern, became "Lozengy or and azure, a chevron gules",[16] and one of the more celebrated and historic heraldic cases heard in a military court was recorded. This coat of arms was afterwards used by Sir Ferdinando Gorges.[17] The ancient Gorges canting arms of "Argent, a gurges azure", being a blue whirlpool on a white (or silver) background, gurges signifying in Latin a Whirlpool,[18] had been retained some generations before by the senior Gorges line seated at Tamerton Foliot, Devon, the cadet line having married the de Morville heiress. 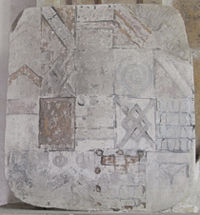 Gorges effigy, St Mary's Church, Tamerton Foliot Said by Raymond Gorges op.cit to represent John Gorges of Warleigh House, lord of the manor of Tamerton Foliot, who flourished at the start of the 15th.c.

The whirlpool arms as borne by the senior branch can be seen in Tamerton Foliot Church of St. Mary as a whorl in the 9th. quartering on the 1617 Coplestone funerary monument. The Coplestone family inherited Tamerton Foliot by marriage to a Gorges heiress. In the form of 3 concentric annulets the arms were formerly visible sculpted on the tunic of the adjacent knightly effigy, said by Raymond Gorges op.cit to represent John Gorges of Warleigh House, lord of the manor of Tamerton Foliot, who flourished at the start of the 15th.c., and his wife. Fire damage has since removed all visible trace of any armorial on the knight's tunic. A pair of the wooden roof bosses of the church at Chagford, Devon, display whorls, believed to be the Gorges arms, as the family was connected with that manor.[19] Ormerod, G.W. in his "Historical sketch of the Parish of Chagford", states that the Gorges family had "a great influence in the parish between 1439 and 1461 being descended in the female line from the Wibberi family".

The Gorges family papers held in the Library of the University of Virginia are catalogued as follows: [20]

"They consist of ca. 5,000 items, 1616-1940, and contain the material used by Raymond Gorges to write his book, The Story of a Family through Eleven Centuries, History of the Gorges Family, published in Boston, USA in 1944. The book provides an excellent guide to the materials; the items have been identified according to Mr. Gorges and left in the order used by him with slight modifications. The papers include genealogical information that Mr. Gorges used to produce his pedigree located at the end of the book. There are also family histories, beginning in 1066 when the family was in France, and individual biographies. This material contains information on the careers and schooling of family members as well as copies of their correspondence. The legal papers are an excellent source of English documents and provide added information on the family's interesting and noble history. Also provided is historical information used to provide background for Mr. Gorges' book. Included are Mr. Gorges' research notes which give some indication of his organization for the book. Although he failed to publish it in his lifetime, his wife had the book published to his specifications in 1944. There are also postcards of country scenes in England and Ireland. The materials deal with the entire history of the family from 1066 to the 20th Century but original documents date from 1618. Also included is Mr. Gorges' personal correspondence about his research; this correspondence is interfiled with relevant materials. This is an excellent collection for historical information on England and Ireland especially the historical intertwining of the two nations".