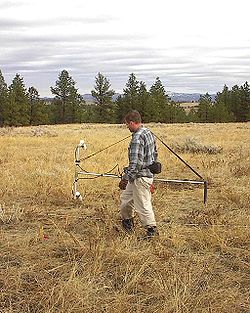 Magnetic survey of an archaeological site 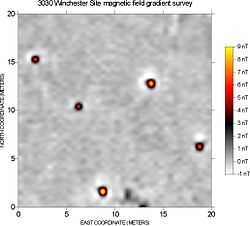 Magnetometers used in geophysical survey may use a single sensor to measure the total magnetic field strength, or may use two (sometimes more) spatially separated sensors to measure the gradient of the magnetic field (the difference between the sensors). In most archaeological applications the latter (gradiometer) configuration is preferred because it provides better resolution of small, near-surface phenomena. Magnetometers may also use a variety of different sensor types. Proton precession magnetometers have largely been superseded by faster and more sensitive fluxgate and cesium instruments.

Every kind of material has unique magnetic properties, even those that we do not think of as being "magnetic". Different materials below the ground can cause local disturbances in the Earth’s magnetic field that are detectable with sensitive magnetometers. The chief limitation of magnetometer survey is that subtle features of interest may be obscured by highly magnetic geologic or modern materials.

Magnetometers react very strongly to iron and steel, brick, burned soil, and many types of rock, and archaeological features composed of these materials are very detectable. Where these highly magnetic materials do not occur, it is often possible to detect very subtle anomalies caused by disturbed soils or decayed organic materials. Many types of sites and features have been successfully mapped with magnetometers, ranging from very ephemeral prehistoric campsites to large urban centers.

Magnetic surveys are extremely useful in the excavation and exploration of underwater archaeological sites. The apparatus used on the water slightly differs from that on land. Marine magnetometers come in two types: Surface towed and near-bottom. Both are towed a sufficient distance (about two ship lengths) away from the ship to allow them to collect data without it being polluted by the ship's magnetic properties. Surface towed magnetometers allow for a wider range of detection at the price of precision accuracy that is afforded by the near-bottom magnetometers.[2]

Another common type is the newer proton precession magnetometer. This utilizes a container full of hydrogen rich liquids (commonly kerosene or methanol) that, when agitated by a direct current (DC) or Radio Frequency (RF), cause the electrons to become energized and transfer that energy to the protons due to the Overhauser Effect basically turning them into dipole magnets. When the stimulus is removed, the protons precess at a rate that can be interpreted to determine the magnetic forces of the area.[3]

In maritime archaeology, these are often used to map the geology of wreck sites and determine the composition of magnetic materials found on the seafloor. An Overhauser magnetometer (PPM) was used in 2001 to map Sebastos (the harbor of Caesarea Maritima) and helped to identify components of the Roman concrete.[4]