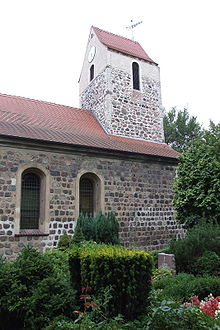 Mahlsdorf is a locality (Ortsteil) within the Berlin borough (Bezirk) of Marzahn-Hellersdorf. Until 2001 it was part of the former borough of Hellersdorf.

The locality was mentioned for the first time in a document of 1345, named as Malterstorp. Until 1920 it was a municipality of ther former Niederbarnim district, merged into Berlin with the "Greater Berlin Act" [1].

Mahlsdorf is located in the eastern suburb of Berlin, at the borders with the Brandenburger district of Märkisch-Oderland. It is bounded by the municipality of Neuenhagen and Hoppegarten, with its hamlets Hönow, Waldesruh and Birkenstein. The Berliner bordering localities are Hellersdorf, Kaulsdorf and Köpenick (in Treptow-Köpenick district). In the south of the quarter there are the lakes Eisensee and part of the Habermannsee, divided with Kaulsdorf.

The locality, crossed by the federal highways B1 and B5, is served by the S-Bahn line S5, at the rail station of Mahlsdorf. Birkenstein station, situated in the homonymous hamlet of the town of Hoppegarten, is close to the eastern suburb of the quarter.