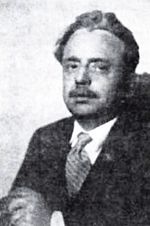 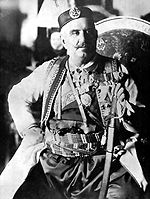 Nicholas I of Montenegro supported the rebellion

Kingdom of Montenegro and King Nikola Petrović supported the rebellion. The main headquarters of the rebels were in Podgorica and King Nikola provided weapons for the insurgents.[4] Although both king Nikola and prince Danilo were assuring Ottoman ambassador that they are observing "the strictest neutrality" it was obvious that Kingdom of Montenegro was involved in this revolt. General Vukotić organized passing out the weapon to the rebels..[5]

Troops of Montenegro supported the revolt and captured 12 Ottoman soldiers and imprisoned them in Podgorica.[10]

The first serious attempt of the Ottoman government to suppress the revolt resulted with the Battle of Deçiq. Terenzio Tocci gathered the Mirdite chieftains on April 26, 1911 in Orosh, proclaimed the independence of Albania and established the provisional government.[11] Shefqet Turgut Pasha wanted to meet this threat and returned to the region with 8.000 soldiers. As soon as he reached Shkodër on May 11, he issued a general proclamation which declared martial law and offered an amnesty for all rebels (except for Malisori chieftains) if they immediately return to their homes.[12] After Ottoman troops entered the area Tozzi fled the empire abandoning his activities.[13]

On May 14th, three days after his poclamation, Shefqet Turgut Pasha gave order to his troops to seize Dečić, hill that overlooked Tuzi.[14] Sixty Albanian chieftains rejected Turgut Pasha's proclamation on their meeting in Podgorica on May 18th.[15] After almost a month of intense fightings rebels were trapped and their only choices were either to die fighting, to surrender or to flee to Montenegro.[16] Most of the rebels chose to flee to Montenegro which became a basis for large number of rebels determined to attack the Ottoman Empire.[17]

On June 12th Porte prematurely proclaimed that revolt has ended.[18]

Leaders of the revolt organized a meeting in a village in Montenegro (Gerče) on June 23rd. Ismail Qemali, joined them and together they draw up "Gerče Memorandum" (sometimes referred to as "Red Book" because of the color of its covers[19] ) which addressed their requests both to Ottoman Empire and Europe (in particular to the Great Britain).[20] This memorandum was signed by 22 Albanian chieftains, four from each tribe of Hoti, Grude and Skrel, five from Kastrati, three from Klementi and two from Shale.[21]

Activities of the Great Powers 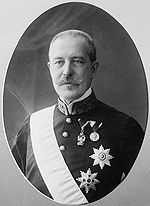 von Aehrenthal sent the warning note to the Porte

On June 8, von Aehrenthal, the foreign minister of Austria-Hungary, issued semi-official note to the Ottoman Empire[28] and informed Porte that Ottoman repression of the Catholic tribes will not be ignored and in case it is continued Austria-Hungary will take an action.[29] Austrian intervention to support the rebels was urged by Catholic journals in Vienna too.[30]

Failed attempts to organize revolt in the north and south Albania

The Albanian revolts in the period before the First Balkan War were organized mostly in the region of Malësia. Isa Boletini, one of the leaders of the Albanian insurgents in Kosovo vilayet, wrote a proclamation on March 23, 1911 to the Albanians in the south to join Albanians from the Kosovo vilayet in their uprising. He sent his emissaries on April 15, 1911 to pass his proclamation to the southern insurgents.[31] One of the main tasks of the Black Society for Salvation was to organize uprisings in the southern territories.[32] The members of the society organized a meeting in Kolonjë. The meeting was attended by the emissaries from the Kosovo vilayet who brought the proclamation of Isa Boletini.[33] The leaders of the society decided in that meeting to organize groups of armed rebels and to launch the uprising in the south in early June 1911.[34] The society managed to establish committees in several towns including Korçë, Elbasan, Debar and Ohrid, but it failed to maintain control over them because each committee acted on its own direction.[35]

Suppression of the revolt

After the Battle of Deçiq Ottoman government decided for peaceful means of suppression of the revolt because frequent clashes with Albanians attracted attention of the European Great Powers.[36]

On June 11th sultan Mehmed V visited Skopje where he was greeted enthusiastically by the local population together with two Albanian chieftains who swore their allegiance to the Ottoman sultan.[37] On June 15, the date of the Battle of Kosovo, he visited the site of the historical battle greeted by 100.000 people. During his visit to Kosovo vilayet he signed a general amnesty for all participants of the Albanian revolts of 1910 and 1911.[38]

Ottoman representatives managed to deal with the leaders of Albanian rebels in Kosovo Vilayet and Scutari Vilayet separately, because they were not united and lacked central control.[39] The Ottoman Empire first managed to pacify the northern Albanian malësorë (highlanders) from Scutari Vilayet reaching a compromise during a meeting in Podgorica. In order to resolve the problems in the south, the Ottoman representatives invited Albanian southern leaders to a meeting in Tepelenë on August 18, 1911. They promised to meet most of their demands, like general amnesty, the opening of Albanian language schools, and the restriction that military service was to be performed only in the territory of the vilayets with substantial Albanian population. Other demands included requiring administrative officers to learn the Albanian language, and that the possession of weapons would be permitted.[40]

The Albanian Revolt of 1911 stimulated Turkish nationalism because it proved that it was impossible to maintain the unity of the population of the Ottoman Empire even in case of Muslim community.[41]