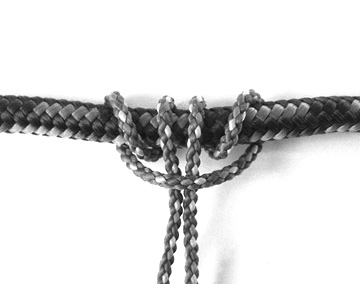 A Prusik is a or knot used to put a loop of cord around a rope, applied in , , , , , and by s. The term Prusik is a name for both the loops of cord and the hitch, and is the verb to prusik. More casually, the term is used for any friction hitch that can grab a rope. The word is often misspelled as Prussik or prussic, because of its similarity to the term .

The Prusik hitch is named for its inventor, Austrian mountaineer Dr. Karl Prusik. It was shown in a 1931 Austrian mountaineering manual for rope ascending. It was used on several mountaineering routes of the era to ascend the final summit peak, where a rope could be thrown over the top and anchored so that climbers could attain the summit by prusiking up the other side of the rope.

A prusik does little or no damage to the rope it is attached to. Care should be taken to learn from a skilled instructor if a climber plans to use this or any other knot in a situation where failure could cause property damage, injury, or death.

Advantages of a Prusik hitch

Climbers carry Prusik cords mainly for emergency use, as they are lighter than other options. Prusiks are fast to place on a rope, and with practice can be placed with one hand. The loops of cord can be used as slings, and are thus multi-functional in a climbing environment.

Prusiks will work around two ropes, even two ropes of different diameters. Prusiks provide a strong attachment that will not damage or break the rope, and so are used in some rope-rescue techniques. Prusiks are good to use in hauling systems where multiple rope-grabs may be needed, and where mechanical rope-grabs are not available.

Prusiks are far less likely to damage the main rope than mechanical rope-grabs such as a . A prusik which is overloaded will initially slip, causing no damage. If loaded to great excess, the worst result is that it slides until the heat of friction causes physical failure of the prusik cord, rather than the rope. Mechanical rope-grabs when overloaded will sometimes damage the sheath of the rope, or in extreme cases sever the rope entirely.

Depending on which variant is used, Prusik hitches have the advantage of working in both directions. Most mechanical rope-grabs work like a ratchet, moving freely up the rope, but grabbing when a load is placed down on them. Traditional Prusiks (such as those shown below) will grab when pulled by the tail, either up or down, and will slide either way when pushed by the barrel.

Although the Prusik Climb technique may be seen as outdated by some, the US Army still includes it in its annual Best Ranger competition. Rangers in the competition routinely make it up a 90 foot rope in under a minute.

Disadvantages of a Prusik hitch

Prusiks are ineffectiveFact|date=September 2007 upon frozen ropes. This is due to the necessity of friction for the Prusik to function. Mechanical devices (such as s) to grab the rope are available that are easier and faster to use, but heavier, more expensive and bulkier.

Although prusik can be used in a general way, the Prusik hitch is a specific hitch. The two main alternatives are the and the . Each has its advantages and disadvantages, mainly in how easy they are to use for climbing a rope. Another variation is the or , used by some people as a backup knot while rappelling.

A Prusik hitch is tied using a loop of narrow but strong nylon accessory cord or a sling (though some suggest avoiding spectra slings, due to their high potential for melting when the hitch slips). The length of this loop depends on the application. For instance, the loop used for an Auto-Bloc might only be 20 cm, whereas the foot loop for climbing a rope might work better with a length of 100 cm or more. As a general rule, longer loops are preferable over shorter ones, as a loop can always be shortened by tying a knot in it.

The Prusik is tied by wrapping the prusik loop around the rope a number of times, usually 3-5 times depending on the materials, and then back through itself, forming a barrel around the rope with a tail hanging out the middle. When the tail is weighted, the turns tighten and make a bend in the rope. When weight is removed, the loop can be moved along the rope by placing a hand directly on the barrel and pushing. Breaking the Prusik free from the rope after it has been weighted can be difficult, however, and is easiest done by pushing the "bow", the loop of cord which runs from the top wrap over the knot to the bottom wrap, along the tail a little. This unwinds the wrap to loosen the grip of the hitch, and makes movement easier.

Many materials may be used to tie a prusik. The webbing illustrated is one choice, but many find round cord to work better. Adding more wraps increases the grip.

*Rappel Backup/Self-Belay Below The Device: A Prusik is placed below the descender and controlled with the brake hand. It acts as an automatic 'dead man's handle' should the climber be incapacitated or need to use both hands. Careful setup of the backup is critical. An 'AutoBloc' or 'French Prusik' knot is most widely used in this application. [http://ozultimate.com/canyoning/knots/french_prusik/]

*Rappel Backup/Self-Belay Above The Device A Prusik is placed above the descender and controlled with the hand not being used as the brake hand. This configuration allows for easier and faster transition from rappeling to climbing the rope, but can also result in the Prusik locking tight as the amount of friction required to hold the load at that point is far higher than that experienced by a "self-belay below the device".

*Prusiking or ascending the line: Two prusiks used in tandem can be used to climb a fixed rope. One prussik is attached to the belay loop sewn onto the front of a harness, and the other attached below that is a longer length of cord reaching to one foot. The climber can then stand up in the foot loop, slide the prusik hitch of the waist loop further up the rope and then "sit" down on it. Once sitting, they can slide the foot loop up the rope and repeat the process.

*Escaping the Belay: In a lead-climbing situation, should the climber become incapacitated in a position where they cannot be safely lowered to the ground, the belayer must "escape the belay" in order to effect rescue. After locking the rope in the belay device with one hand, the belayer can tie a prusik to the rope with the other hand, and then use the prusik loop to transfer the load to a fixed anchor. The belayer can then go to effect rescue or get help.

*Rescue Applications Rope rescue teams, such as in or in high-angle technical rescue, use a Prusik hitch as a 'ratchet' or "progress capture device". A prusik with a "prusik minding pulley" is used to hold a load while tensioning a line. The pulley advances the prussik up the line and prevents it from going back out. This can be used to raise a patient or tension a highline for a , or in "boat-on-tether" and similar rescue operations.

When to carry (climbing)

All sorts of climbers carry prusiks as standard equipment "just in case". If you drop your rappel device, prusiks may be the only way to get down. Prusiks are unlikely to be needed on short climbs where the climber can be readily lowered to the ground; conversely, they may prove useful where the climber cannot be lowered, for instance from a high cliff or due to a hazard underneath the climber.

Prusiks can be improvised from other climbing equipment, such as slings already carried by the climber. Some sources recommend that three prusik loops be carried, since two are required to ascend a rope and the third allows for one to be lost, damaged, or dropped. Three loops also allow the climber to pass a knot in the rope, a difficult task without a third loop.

* [http://ozultimate.com/canyoning/knots/prusik/ Prusik Knot at OZultimate.com canyoning] with good pictures showing how it is tied.
* [http://fmg-www.cs.ucla.edu/geoff/prusik_knot.html Prusik Knot used in Sailing] for climbing a mast, with other notes.
* [http://www.iland.net/~jbritton/Friction%20Hitches.html Many Varieties of Friction Hitches]
* [http://storrick.cnchost.com/VerticalDevicesPage/Misc/RappelSafetyPost.html Discussion of Rappel Backups - Pros and Cons]
* [http://www.outdooridiots.com/features/200605/prusik/prusik.asp A detailed article, good pictures, several prusiks and ideas shown.]
* [http://www.rockclimbing.com/Articles/General/A_scientific_study_of_common_friction_knots._273.html A scientific study of common friction knots]