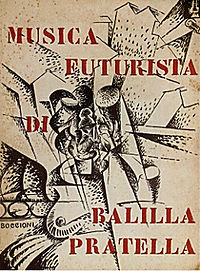 Cover of the 1912 edition of Musica futurista by Francesco Balilla Pratella. The cover art is by Umberto Boccioni.

The Manifesto of Futurist Musicians is a manifesto written by Francesco Balilla Pratella on October 11, 1910.[1] It was one of the earliest signs of Futurism's influence in fields outside of the visual arts.[1]

In the manifesto, Pratella appeals to the youth for only they can understand what he says and they are thirsty for 'the new, the actual, the lively.' He goes on to talk about the degeneration of Italian music to that of a vulgar melodrama which he realized through winning a prize for one of his musical Futurist work La Sina d'Vargoun based on one of Pratella's free verse poems. As part of his monetary prize, he was able to put on a performance of that work, which received mixed reviews. Through his entry into Italian musical society, he was able to experience firsthand the 'intellectual mediocrity' and 'commercial baseness' that makes Italian music inferior to the Futurist evolution of music in other countries.

He then goes on to list composers in other European countries who are making strides in the futurist evolution of music even when battling tradition. For example Pratella discusses the geniuses of Richard Wagner and Richard Strauss and how they struggled to combat and overcome the past with innovatory talent. He expresses his admiration for Edward Elgar in England because he is destroying the past by resisting the will to amplify symphonic forms, and is finding new ways to combine instruments for different effects, which keeps in line with the Futurist aesthetic. Pratella also mentions Finland and Sweden, countries in which innovations are being made by means of nationalism and poeticism, citing the works of Sibelius.

After this list, he raises the question of musical innovation of Italian composers. He states that 'vegetating' schools, conservatories, and academies are likes snares on youths and that the impotency of professors and masters underline traditionalism while stifling efforts to be innovative. Pratella says that this results in the repression of free and daring tendencies, the prostitution of the glories of music's past, and the limitation of a study of forms of a dead culture, among other things.

Pratella then laments the young musical talents who fixate themselves on writing operas under the protection of publishing houses, only to see them fail to have their work realized because the operas are badly written (for lack of a strong ideological and technical foundation) and rarely staged. And the few who do get their works staged only experience ephemeral successes.

Next, Pratella talks about the pure symphony and how it is a refuge for the failed opera composers he previously mentioned, who justify their failures by preaching the death of the music drama. Evoking the double-edged sword, Pratella points out that they confirm the traditional claim that Italian composers are inept at the symphonic form, the most noble and vital form of composition. And it is only the writer's own impotence to blame for this double failure. He then scolds them for writing "well-made music," or music that appeals to the population, and scolds the public for letting itself be cheated by its own free will.

The author moves on to the topic of commercialism and the power of publisher-merchants, claiming that they impose limitations on operatic forms and proclaim the models that cannot be surpassed (the 'vulgar' operas of Giacomo Puccini and Umberto Giordano). He also points out how publishers have the power of controlling public tastes, harboring a sense of the Italian monopoly on melody and bel canto.

Pratella then praises one Italian composer and a publisher's favorite, Pietro Mascagni, for his will to rebel against the traditions of art, the publishers, and the public. To the author, Mascagni has shown great talent in his attempts at innovation in the harmonic and lyrical aspects of opera.

The Futurist Manifesto is evoked towards the end of Pratella's manifesto, as he reiterates Futurism's pursuit of the rebellion of the life of intuition and feeling and the exaltation of the past at the expense of the future. He calls for the young composers to have the 'hearts to live and fight, minds to conceive, and brows free of cowardice.' Pratella then frees himself from the 'chains of tradition, doubt, opportunism, and vanity.'

Pratella offers his conclusions to the 'young, bold and the restless' while repudiating the title of Maestro as a stigma of mediocrity and ignorance:

Pratella authored two more manifestos, the "Technical Manifesto of Futurist Music" and "The Destruction of Quadrature." These manifestos along with "Manifesto for Futurist Musicians" were published together in 1912. This volume also contained Pratella's Futurist Music for Orchestra. [1]