Marcelo Vieira da Silva Júnior (born 12 May 1988) is a Brazilian footballer who plays for Real Madrid and the Brazil national football team. Mainly a left defender, he can also operate as a left winger.

Marcelo started playing futsal at the age of 9 and by the age of 13 he was on the books of Fluminense. He comes from a very poor background and even considered quitting football, but his club considered him as one of their "Crown Jewels" and ensured that he continued playing.

Marcelo joined Real Madrid during the January transfer window in 2007. On his arrival, club president Ramón Calderón said, "He is an important signing for us. He is a young player who will inject some freshness into the side and is part of our plan to bring younger players into the squad. We're very happy because he's a pearl that half of Europe wanted."[2] Many spectators hailed him as Roberto Carlos' potential successor in the left-back role.

Marcelo made his debut as a substitute in the 2–0 defeat against Deportivo La Coruña on 7 January 2007.[3] On 14 April 2007, then coach Fabio Capello gave Marcelo his first start for Real Madrid against Racing de Santander. Real Madrid controversially lost the game 2–1.[4] In the 2007–08 season, Marcelo had started nearly all of Madrid's league games under the new manager Bernd Schuster. His ability, speed running across the field, attack, and defence had enabled him to become a very important player for Real Madrid.

After a string of poor performances in 2009, Marcelo found himself on the bench for much of the remaining season while under new manager Juande Ramos, mainly as deputy to the more defensive minded Gabriel Heinze. Juande Ramos deployed Marcelo as a winger on more than one occasion, and the Brazilian adapted well to his new role. He scored his first goal after receiving a heel flick from striker Gonzalo Higuaín and slotting the ball past the goalkeeper in Real Madrid's 4–0 thumping of Sporting de Gijón. After the game, coach Ramos declared that Marcelo's future would be positioned as a winger, but will push back to defense when required. Marcelo scored his second goal for Real Madrid in a victory over Almeria, a powerful strike from outside of the box with his weaker right foot.

On 18 April 2009 he scored his third goal of his Real Madrid career, when he scored the only goal of the game against Recreativo de Huelva away from home.[5] He scored his fourth goal against Sevilla at the Estadio Ramón Sánchez Pizjuán in April 2009.

Under the next head coach Manuel Pellegrini, Marcelo consistently featured in the starting eleven for his versatility and pace along the left flank in offensive and defensive roles. He continued to be employed as a left-winger under Pellegrini, and reached the top of the assist charts of La Liga in the 2009–10 season. He admitted in a press conference at the end of 2009, "I now feel better playing as a winger." [6] His successful performance in Madrid's 2009/2010 campaign earned him a contract extension on 5 February 2010 with the club until June 2015.[7]This season proved to be his break-through season at the club. 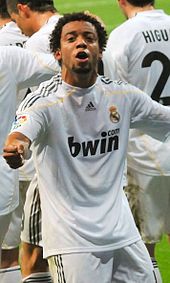 In the 2010–11 season under coach Jose Mourinho, Marcelo was back in his natural position of left-back. He has started all league games, paying back the coach's confidence in him with defensive steel and attacking intent and gained the coach's admiration.[8] On 25 November 2010, Marcelo was named as a part of the 55 player shortlist for the FIFA World XI. He scored his first goal of the new season in a 1–0 win against Espanyol on 13 February.[9] He had a terrific match against Lyon in the Champions League. Showing his attacking flair and defensive skills, he opened the scoring with his first ever UEFA Champions League goal and assisted Benzema's goal, at the end he was named man of the match, of which Real went on to win 3–0, and progressed to the quarter-finals for the first time since 2004.[10] Marcelo then continued his fine season by scoring in the 2nd leg against Barca in Camp Nou. The game ended 1-1. Marcelo's successful campaign in the UEFA Champions League has earned him a starting spot in UEFAs starting XI. Marcelo was sent off on the 17th August 2011 at Madrids 3-2 loss to Barcelona.

Marcelo's first taste of international football came at the youth level. He was called up for the 2005 FIFA U-17 World Championship and the 2007 FIFA U-20 World Cup.

Marcelo scored on his Brazil debut against Wales at Tottenham Hotspurs' White Hart Lane (the scored finished 2–0). He picked up the ball just outside the Wales box and shot for a traditional Brazilian full back goal. Marcelo has become one of the preferred choices of Brazil's football coach Dunga. Marcelo has recently been compared to former Real Madrid and Brazilian national team left-back Roberto Carlos. The two had played together during the second half of the 2006–07 season before Carlos' move to Turkish team Fenerbahçe.

He was called up for the 2008 Olympic squad, where he won a bronze medal.

Marcelo was called up for the 12 August 2009 match against Estonia but had to withdraw due to injury. In May 2010, he was named as one of the seven players serving as backup for Brazil's 2010 FIFA World Cup squad.[11] Despite not being called up by then Brazil coach Dunga, he was selected again by new boss Mano Menezes for a friendly against the United States on August 10, 2010. Marcelo got called up for a friendly against Mexico where he was named Man of the Match and scored a wondergoal where he dribbled past several players and then blasting the goal into the net.

In 2008, Marcelo married his longtime girlfriend Clarisse Alves, and on 24 September 2009, they had their first child, a son named Enzo Alves Vieira.[12][13] Marcelo shares a good friendship with club mates Cristiano Ronaldo, Pepe and Fábio Coentrão and is commonly involved in their special celebrations after scoring a goal. He has a number of tattoos, including his shirt number and day of birth (12) tattood onto his left arm.[14]

His grandfather Pedro is also tattoed on his arm. San Pedro is his grandfather who payed the money so he could keep playing football back in Brazil. He dedicates every goal to him and his wife. He said for Real Madrid TV that if it wasn't for Pedro he would have never played football for Fluminese.

On 26 July 2011 Marcelo went to the Alcobendas court. He thusly attained Spanish nationality, which allows him to no longer take up a 'player from outside the EU' place on the Real Madrid squad after completing four years playing for the team.