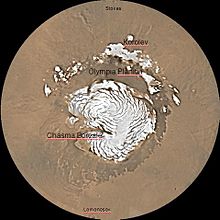 Close to the pole, there is a large valley, Chasma Boreale, that may have been formed from water melting from the ice cap.[2] An alternative view is that it was made by winds coming off the cold pole.[3][4] Another prominent feature is a smooth rise, called Olympia Planitia. In the summer, a dark collar around the residual cap becomes visible; it is mostly caused by dunes.[5]

Mare Boreum quadrangle includes some very large craters that stand out in the north because the area is smooth with little change in topography. These large craters are Lomonoson and Korolev. Although smaller, the crater Stokes also is easy to see.

The North Polar ice cap has a swirl pattern and is roughly 1,100 km across. Mariner 9 in 1972 discovered a belt of sand dunes that ring the polar ice deposits. The ring is 500 km across in some places. It may be the largest dune field in the solar system.[6]

Surface of Mars, as seen by Phoenix (spacecraft). Surface is shaped into polygons which are common where the ground freezes and thaws.

Unlike some the sites visited by the Viking and Pathfinder landers, nearly all the rocks near the Phoenix landing site are small. For about as far as the camera can see, the land is flat, but shaped into polygons. The polygons are between 2–3 meters in diameter and are bounded by troughs that are 20 to 50 cm deep. These shapes are caused by ice in the soil reacting to major temperature changes.[7] The top of the soil has a crust. The microscope showed that the soil is composed of flat particles (probably a type of clay) and rounded particles. When the soil is scooped up, it clumps together. Although other landers in other places on Mars have seen many ripples and dunes, no ripples or dunes are visible in the area of Phoenix. Ice is present a few inches below the surface in the middle of the polygons. Along the edge of the polygons the ice is at least 8 inches deep. When the ice is exposed to the Martian atmosphere it slowly disappears.[8] In the winter there would be accumulations of snow on the surface.[9]

Results published in the journal Science after the Phoenix mission ended reported that chloride, bicarbonate, magnesium, sodium, potassium, calcium, and possibly sulfate were detected in the samples. The pH was narrowed down to 7.7 + or - 0.5. Perchlorate (ClO4), a strong oxidizer, was detected. This was a significant discovery. The chemical has the potential of being used for rocket fuel and as a source of oxygen for future colonists. Under certain conditions perchlorate can inhibit life; however some microorganisms obtain energy from the substance (by anaerobic reduction). The chemical when mixed with water can greatly lower freezing points, in a manner similar to how salt is applied to roads to melt ice. Perchlorate strongly attracts water; consequently it could pull humidity from the air and produce a small amount of liquid water on Mars today.[10][dead link] Gullies, which are common in certain areas of Mars, may have formed from perchlorate melting ice and causing water to erode soil on steep slopes.[11] Two sets of experiments demonstrated that the soil contains 3-5% calcium carbonate. When a sample was slowly heated in the Thermal and Evolved-Gas Analyzer (TEGA), a peak occurred at 725 degrees C, which is what would happen if calcium carbonate were present. In a second experiment acid was added to a soil sample in the Wet Chemistry Laboratory (WCL) while a pH electrode measured the pH. Since the pH rose from 3.3 to 7.7, it was concluded that calcium carbonate was present. Calcium carbonate changes the texture of soil by cementing particles. Having calcium carbonate in the soil may be easier on life forms because it buffers acids, creating a pH more friendly toward life.[12]

Much of the surface of Mare Boreum is covered with patterned ground. Sometimes the ground has the shape of polygons. Close-up views of patterned ground in the shape of polygons was provided by the Phoenix lander. In other places, the surface has low mounds arranged in chains. Some scientists first called the features fingerprint terrain because the many lines looked like someone's fingerprint. Similar features in both shape and size are found in terrestrial periglacial regions such as Antarctica. Antarctica's polygons are formed by repeated expansion and contraction of the soil-ice mixture due to seasonal temperature changes. When dry soil falls into cracks sand wedges are made which increase this effect. This process results in polygonal networks of stress fractures.[13]

Part of the ice cap consists of dry ice, solid carbon dioxide. Each winter the ice cap grows by adding 1.5 to 2 meters of dry ice. In summer, the dry ice sublimates (goes directly from a solid to a gas) into the atmosphere. Mars has seasons that are similar to Earth's, because its rotational axis has a tilt close to our own Earth's (25.19° for Mars, 23.44° for Earth).

During each year on Mars as much as a third of Mars' thin carbon dioxide (CO2) atmosphere "freezes out" during the winter in the northern and southern hemispheres. Scientists have even measured tiny changes in the gravity field of Mars due to the movement of carbon dioxide. In other words, the winter build-up of ice changes the gravity of the planet.[15]

The ice cap in the north is of a lower altitude then the one in the south. It is also warmer, so all the frozen carbon dioxide goes away each summer.[16] The part of the cap that survives the summer is called the north residual cap and is made of water ice. This water ice is believed to be as much as three kilometers thick. The much thicker seasonal cap starts to form in the late summer to early fall when a variety of clouds form. Called the polar hood, the clouds drop precipitation which thickens the cap. The north polar cap is symmetrical around the pole and covers the surface down to about 60 degrees latitude. High resolution images taken with NASA's Mars Global Surveyor show that north polar cap is covered mainly by pits, cracks, small bumps and knobs that give it a cottage cheese look. The pits are spaced close together relative to the very different depressions in the south polar cap.

Both polar caps show layered features that result from seasonal melting and deposition of ice together with dust from Martian dust storms. These polar layered deposits lie under the permanent polar caps. Information about the past climate of Mars may be eventually revealed in these layers, just as tree ring patterns and ice core data do on Earth. Both polar caps also display grooved features, probably caused by wind flow patterns and sun angles, although there are several theories that have been advanced. The grooves are also influenced by the amount of dust.[17] The more dust, the darker the surface. The darker the surface, the more melting. Dark surfaces absorb more light energy. One large valley, Chasma Boreale runs halfway across the cap. It is about 100 km wide and up to 2 km deep—that's deeper than Earths' Grand Canyon.[18]

When the tilt or obliquity changes the size of the polar caps change. When the tilt is at its highest, the poles receive far more sunlight and for more hours each day. The extra sunlight causes the ice to melt, so much so that it could cover parts of the surface in tens of meters of ice. Much evidence has been found for glaciers that probably formed when this tilt-induced climate change occurred.[19]

Research reported in September 2009 and published in Icarus shows that the ice rich layers of the ice cap match models for Martian climate swings. NASA's Mars Reconnaissance Orbiter's radar instrument can measure the contrast in electrical properties between layers. The pattern of reflectivity reveals the pattern of material variations within the layers. Radar produced a cross-sectional view of the north-polar layered deposits of Mars. High-reflectivity zones, with multiple contrasting layers, alternate with zones of lower reflectivity. Patterns of how these two types of zones alternate can be correlated to models of changes in the tilt of Mars. Since the top zone of the north-polar layered deposits—the most recently deposited portion—is strongly radar-reflective, the researchers propose that such sections of high-contrast layering correspond to periods of relatively small swings in the planet's tilt because the Martian axis has not varied much recently. Dustier layers appear to be deposited during periods when the atmosphere is dustier.[20]

Research, published in January 2010 using HiRISE images, says that understanding the layers is more complicated then was formerly believed. The brightness of the layers does not just depend on the amount of dust. The angle of the sun together with the angle of the spacecraft greatly affect the brightness seen by the camera. This angle depends on factors such as the shape of the trough wall and its orientation. Furthermore, the roughness of the surface can greatly change the albedo (amount of reflected light). In addition, many times what one is seeing is not a real layer, but a fresh covering of frost. All of these factors are influenced by the wind which can erode surfaces. The HiRISE camera did not reveal layers that were thinner than those seen by the Mars Global Surveyor. However, it did see more detail within layers.[21][22]

Radar measurements of the North Polar ice cap found the volume of water ice in the cap was 821,000 cubic kilometers (197,000 cubic miles). That's equal to 30% of the Earth's Greenland ice sheet. The radar is onboard the Mars Reconnaissance Orbiter.[23]

The Phoenix lander provided several months of weather observations from Mare Boreum. Wind speeds ranged from 11 to 58 km per hour. The usual average speed was 36 km per hour.[24] The highest temperature measured during the mission was -19.6°C, while the coldest was -97.7°C.[25] Dust devils were observed.[26]

Cirrus clouds that produced snow were sighted in Phoenix imagery. The clouds formed at a level in the atmosphere that was around -65°C, so the clouds would have to be composed of water-ice, rather than carbon dioxide-ice because the temperature for forming carbon dioxide ice is much lower—less than -120°C. As a result of the mission, it is now believed that water ice (snow) would have accumulated later in the year at this location.[9]

Scientists think that water ice was transported downward by snow at night. It sublimated (went directly from ice to vapor) in the morning. Throughout the day convection and turbulence mixed it back into the atmosphere.[9]

Interpretation of the data transmitted from the craft was published in the journal Science. As per the peer reviewed data the presence of water ice has been confirmed and that the site had a wetter and warmer climate in the recent past. Finding calcium carbonate in the Martian soil leads scientists to believe that the site had been wet or damp in the geological past. During seasonal or longer period diurnal cycles water may have been present as thin films. The tilt or obliquity of Mars changes far more than the Earth; hence times of higher humidity are probable.[27]