Collider Detector at Fermilab
For other uses of "CDF", see CDF (disambiguation). 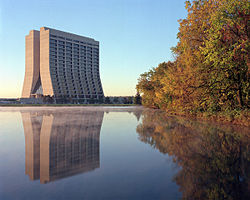 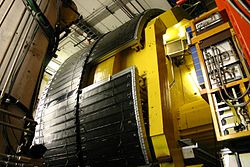 Part of the CDF detector

The Collider Detector at Fermilab (CDF) experimental collaboration studies high energy particle collisions at the Tevatron,the world's former highest-energy particle accelerator. The goal is to discover the identity and properties of the particles that make up the universe and to understand the forces and interactions between those particles.

CDF is an international collaboration of about 600 physicists (from about 30 American universities and National laboratories and about 30 groups from universities and national laboratories from Italy, Japan, UK, Canada, Germany, Spain, Russia, Finland, France, Taiwan, Korea, and Switzerland). The CDF detector itself weighs 5000 tons [1], is about 12 meters in all three dimensions. The goal of the experiment is to measure exceptional events out of the billions of collisions in order to:

The Tevatron collides protons and antiprotons at a center-of-mass energy of about 2 TeV. The very high energy available for these collisions makes it possible to produce heavy particles such as the Top quark and the W and Z bosons, which weigh much more than a proton (or antiproton). These heavier particles are identified through their characteristic decays. The CDF apparatus records the trajectories and energies of electrons, photons and light hadrons. Neutrinos do not register in the apparatus leading to an apparent missing energy. Other hypothetical particles might leave a missing energy signature, and some searches for new phenomena are based on that.

There is another experiment similar to CDF called D0 located at another point on the Tevatron ring.

There are currently two particle detectors located on the Tevatron at Fermilab: CDF and D0. CDF predates D0 as the first detector on the Tevatron. Construction of CDF began in 1982 under the leadership of John Peoples. The Tevatron was completed in 1983 and CDF began to take data in 1985.[1] Over the years, two major updates have been made to CDF. The first upgrade began in 1989 and the second upgrade began in 2001. Each upgrade is considered a "run." Run 0 was the run before any upgrades, Run I was after the first upgrade and Run II was after the second upgrade. Run II includes upgrades on the central tracking system, preshower detectors and extension on muon coverage.[2]

Discovery of the Top Quark

One of CDF's most famous observations is the observation of the top quark in February 1995.[3] The existence of the top quark was hypothesized after the observation of the Upsilon in 1977, which was found to consist of a bottom quark and an anti-bottom quark. The Standard Model, which today is the most widely accepted theory describing the particles and interactions, predicted the existence of three generations of quarks. The first generation quarks are the up and down quarks, second generation quarks are strange and charm, and third generation are top and bottom. The existence of the bottom quark solidified physicists’ conviction that the top quark existed.[4] The top quark was the very last quark to be observed, mostly due to its comparatively high mass. Whereas, the masses of the other quarks range from .005 GeV (up quark) to 4.7GeV (bottom quark), the top quark has a mass of 175 GeV.[5] Only Fermilab’s Tevatron had the energy capability to produce and detect top anti-top pairs. The large mass of the top quark caused the top quark to decay almost instantaneously, within the order of 10−25 seconds, making it extremely difficult to observe. The Standard Model predicts that the top quark may decay leptonically into a bottom quark and a W boson. This W boson may then decay into a lepton and neutrino (t→Wb→ѵlb). Therefore, CDF worked to reconstruct top events, looking specifically for evidence of bottom quarks, W bosons neutrinos. Finally in February 1995, CDF had enough evidence to say that they had "discovered" the top quark.[6]

In order for physicists to understand the data corresponding to each event, they must understand the components of the CDF detector and how the detector works. Each component affects what the data will look like. Today, the 5000-ton detector sits in B0 and analyzes millions of beam collisions per second.[7] The detector is designed in many different layers. Each of these layers work simultaneously with the other components of the detector in an effort to interact with the different particles, thereby giving physicists the opportunity to "see" and study the individual particles.

CDF can be divided into layers as follows:

The beam pipe is the innermost layer of CDF. The beam pipe is where the protons and anti-protons, traveling at approximately .99996c, collide head on. Each of the protons is moving extremely close to the speed of light with extremely high energies. Therefore, in a collision, much of the energy is converted into mass. This allows proton- anti-proton annihilation to produce daughter particles, such as top quarks with a mass of 175 GeV, much heavier than the original protons.[8]

Surrounding the beam pipe is the silicon detector. This detector is used to track the path of charged particles as they travel through the detector. The silicon detector begins at a radius of r = 1.5 cm from the beam line and extends to a radius of r = 28 cm from the beam line.[2] The silicon detector is composed of seven layers of silicon arranged in a barrel shape around the beam pipe. Silicon is often used in charged particle detectors because of its high sensitivity, allowing for high-resolution vertex and tracking.[9] The first layer of silicon, known as Layer 00, is a single sided detector designed to separate signal from background even under extreme radiation. The remaining layers are double sided and radiation-hard, meaning that the layers are protected from damage from radioactivity.[2] The silicon works to track the paths of charged particles as they pass through the detector by ionizing the silicon. The density of the silicon, coupled with the low ionization energy of silicon, allow ionization signals to travel quickly.[9] As the silicon detector is located within a magnetic field, the curvature of the path of the silicon allows physicists to calculate the momentum of the particle. More curvature means less momentum and vice versa. As a particle travels through the silicon, its position will be recorded in 3 dimensions. The silicon detector has a track hit resolution of 10 um, and impact parameter resolution of 30 um.[2] Physicists can look at this trail of ions and determine the path that the particle took.[8]

Outside of the silicon detector, the central outer tracker works in much the manner as the silicon detector as it is also used to track the paths of charged particles and is also located within a magnetic field. The COT, however, is not made of silicon. Silicon is tremendously expensive and is not practical to purchase in extreme quantities. COT is a gas chamber filled with tens of thousands of gold wires arranged in layers and argon gas. Two types of wires are used in the COT: sense wires and field wires. Sense wires are thinner and attract the electrons that are released by the argon gas as it is ionized. The field wires are thicker than the sense wires and attract the positive ions formed from the release of electrons.[8] There are 96 layers of wire and each wire is placed approximately 3.86mm apart from one another.[2] As in the silicon detector, when a charged particle passes through the chamber it ionizes the gas. This signal is then carried to a nearby wire, which is then carried to the computers for read-out. The COT is approximately 3.1 m long and extends from r = 40 cm to r = 137 cm. Although the COT is not nearly as precise as the silicon detector, the COT has a hit position resolution of 140μm and a momentum resolution of 0.0015 (GeV/c)−1.[2]

The solenoid magnet surrounds both the COT and the silicon detector. The purpose of the solenoid is to bend the trajectory of charged particles in the COT and silicon detector by creating a magnetic field parallel to the beam.[2] The solenoid has a radius of r=1.5 m and is 4.8m in length. The curvature of the trajectory of the particles in the magnet field allows physicists to calculate the momentum of each of the particles. The higher the curvature, the lower the momentum and vice versa. Because the particles have such a high energy, a very strong magnet is needed to bend the paths of the particles. The solenoid is a superconducting magnet cooled by liquid helium. The helium lowers the temperature of the magnet to 4.7K or -268.45°C which reduces the resistance to almost zero, allowing the magnet to conduct high currents with minimal heating and very high efficiency, and creating a powerful magnetic field.[8]

Layers 5 and 6: Electromagnetic and Hadronic Calorimeters

The final "layer" of the detector consists of the muon detectors. Muons are charged particles that may be produced when heavy particles decay. These high-energy particles hardly interact so the muon detectors are strategically placed at the farthest layer from the beam pipe behind large walls of steel. The steel ensures that only extremely high-energy particles, such as neutrinos and muons, pass through to the muon chambers.[8] There are two aspects of the muon detectors: the planar drift chambers and scintillators. There are four layers of planar drift chambers, each with the capability of detecting muons with a transverse momentum PT>1.4GeV/c.[2] These drift chambers work in the same way as the COT. They are filled with gas and wire. The charged muons ionize the gas and the signal is carried to readout by the wires.[8]