Marie de Rohan (Marie Aimée; December 1600 – 12 August 1679) was a French aristocrat, famed for being the center of many of the intrigues of the first half of the 17th century in France. In various sources, she is often known simply as Madame de Chevreuse.

Marie de Rohan, styled Mademoiselle de Montbazon, was the daughter of Hercule de Rohan of the House of Rohan, possessed of great estates in Brittany and Anjou. Her mother was Madeleine de Lenoncourt.

In September 1617, she married the Grand Constable (supreme commander of the French armies) Charles d'Albert, Duke of Luynes, a favourite of King Louis XIII. He formed her taste for unscrupulous political intrigue, introducing her at court, where she gained the confidence of both the king and queen. In December 1618, Louis XIII named her surintendante of the queen's household, ousting the connétable de Montmorency. Her influence with the queen consort, Anne of Austria, was unrivaled.

In 1620, she gave birth to Louis Charles d'Albert, for whom Louis XIII stood godfather. Louis-Charles became the second Duke of Luynes and married his mother's sister, Anne de Rohan. His daughter Jeanne Baptiste, simultaneously Marie's granddaughter and niece, was the mistress of Victor Amadeus II of Sardinia.

Her youngest half brother was Francois de Rohan, Prince of Soubise, founder of the Soubise line of the House of Rohan. His wife was Anne de Rohan-Chabot, Madame de Soubise, who was one time mistress of Louis XIV.

After Luynes died in combat in 1621, she married Claude of Lorraine, Duke of Chevreuse on 21 April 1622. From this second marriage, she had three daughters. Two of them were religious, Anne-Marie of Lorraine (1625–1652), abbess of Pont-aux-Dames, and Henriette of Lorraine (1631–1693), abbess of Jouarre and later at Port-Royal. The third daughter, Charlotte-Marie of Lorraine (1627–1652), having failed to wed Armand de Bourbon, Prince of Conti, became the mistress of Cardinal de Retz and played a role in the Fronde, but never married.

Friend and confidante of the queen, she was banished from court after an incident in which she had encouraged the pregnant queen in boisterous games in the corridors of the Louvre, resulting in a miscarriage. The duc de Chevreuse used all his influence to have her restored to court. 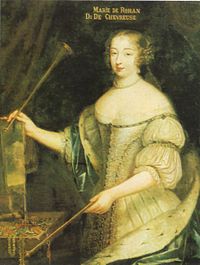 In her attempts to regain her lost position, she provoked or encouraged the conspiracies of the court, such as the Buckingham affair (1623–24) that compromised the Queen, which she instigated with the connivance of her English lover, Henry Rich, later created Earl of Holland, and of the highest-ranking aristocrats against Richelieu, such as her complicity in the conspiracy of her lover, the comte de Chalais, that she set up in 1626, with the unlikely intention of replacing Louis XIII with his brother, Gaston d'Orléans. Chalais, deeply embroiled, lost his head on 19 August 1626, while the duchesse de Chevreuse fled to Lorraine, where she soon carried on an affair with Charles IV, Duke of Lorraine, who intervened on her behalf to have her allowed to return to France; once she was reestablished at Dampierre, her subversion of royal power continued. 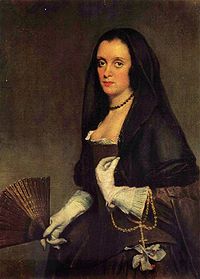 Velázquez's The Lady with a Fan is purported to be a likeness of the duchess, although the features of the sitter differ remarkably from other extant portraits of Marie Aimée.

She was at the center of all the intrigues that involved foreign powers against France: negotiations with the duchy of Lorraine and with Spain conducted by Charles de l'Aubespine, marquis de Châteauneuf, keeper of the seals, who ruined himself on her behalf, revealing to her the councils of the king (1633). Secret exchanges of correspondence with Spain carried out by Anne of Austria were unmasked in 1637, requiring de Chevreuse to flee to Spain, then to England and finally to Flanders. She was involved in the conspiracy of the comte de Soissons (1641) and at the death of the king, a clause in the testament of succession forbade the return to France of the duchesse; a decision of the Parlement of Paris was required to break the will.

After the death of Richelieu, once again in France, she conspired at the center of the cabale des Importants led by Chateauneuf against Mazarin, in 1643; with the arrest and exile of César de Bourbon, duc de Vendôme, she fled once again. During the Fronde, she came closer to Mazarin for a time (1649–1650), but then she switched back to the aristocratic party when the parliamentary Fronde and the aristocratic Fronde joined forces in 1651.

She died in retirement in the convent of Gagny (Seine-Saint-Denis département) in 1679.

She was a tempting subject for colorful biography in the Romantic era: Alexandre Dumas, père entangles her in the plots of The Three Musketeers and Twenty Years After, in which Raoul, the hero of the third novel of Dumas' trilogy, is the secret son of de Chevreuse and the musketeer Athos. Gaetano Donizetti's tragic opera Maria di Rohan, which debuted at the Kärntnertor theater in Vienna on 5 June 1843, followed by a success in Paris in November, was freely based on the conspiracy of Chalais. Victor Cousin published a more serious biography in 1856. Modern biographies are by Denis Tillinac (L'Ange du désordre, (Paris: Robert Laffont) 1985, by Christian Bouyer, La Duchesse de Chevreuse : L'Indomptable et voluptueuse adversaire de Louis XIII (Paris: Pygmalion-Gérard Watelet) 2002, and by Georges Poisson (Paris:Librairie Académique Perrin) 1999. The most recent biography in English is H. Noel Williams, A Fair Conspirator: Marie de Rohan, Duchesse de Chevreuse 2005.

In 2002, she was portrayed by Wendy Albiston in the Doctor Who audio drama The Church and the Crown.

Louise Marie Seguier, Marquise d'O in 1641, had issue
Anne de Rohan (daughter of Hercule, Duke of Montbazon) in 1661 and had issue including Jeanne Baptiste d'Albert de Luynes;
Marguerite d'Aligre in 1685, no issue;