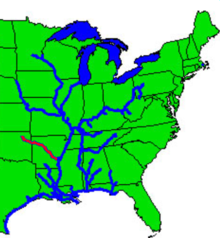 Newt Graham Lock and Dam on the Verdigris River in Wagoner County, Oklahoma

The McClellan-Kerr Arkansas River Navigation System (MKARNS) is part of the inland waterway system originating at the Tulsa Port of Catoosa and running southeast through Oklahoma and Arkansas to the Mississippi River. The system was named for two Senators: Robert S. Kerr (D-OK) and John L. McClellan (D-AR), who pushed authorizing legislation through Congress. The system officially opened June 5, 1971. President Richard M. Nixon attended the opening ceremony.[1] It is operated by the Corps of Engineers.[2]

Through Oklahoma and Arkansas, dams artificially deepen and widen this modest sized river to build it into a commercially navigable body of water. The design enables traffic to overcome an elevation difference of 420 feet (130 m) between the Mississippi River and the Tulsa Port of Catoosa.[2] Along the section of the Arkansas River that carries the McClellan-Kerr channel, the river sustains commercial barge traffic and offers passenger and recreational use and is a series of reservoirs. Total length of the system is 445 miles (716 km).[1]

The Arkansas River is very shallow through Arkansas and Oklahoma, and was naturally incapable of supporting river traffic through most of the year. To allow for navigation, construction was started in 1963 on a system of channels and locks to connect the many reservoirs along the length of the Arkansas River. The first section, running to Little Rock, Arkansas, opened in 1968. The first barge to reach the Port of Catoosa arrived in early 1971.

Each lock measures 110 feet (34 m) wide and 600 feet (180 m) long, the standard size for much of the Mississippi River waterway. Standard jumbo barges, measuring 35 by 195 feet (59 m), are grouped 3 wide by 3 long, with a tug at center rear, to form a barge packet which can be fit into a lock. Larger barge packets must be broken down and passed through the lock in sections, and rejoined on the opposite side.

The specifications for the channel itself are as follows:

The following tables list the features of the navigation system, from the Mississippi River to the origin at the Port of Catoosa. Except as noted, all locks are on the Arkansas River.

Note that there is no lock 11; sequentially, it would have been in the middle of Lake Dardanelle. Per the animated system map (see "External links"), Dardanelle Lock & Dam (lock 10), which forms Lake Dardanelle, is the highest facility on the system (54 feet between upper & lower pools); Ozark-Jeta Taylor Lock & Dam (lock 12), just above that lake, is the third highest (34 feet). Thus, it is likely that those two facilities were redesigned, in terms of height and possibly location, so as to eliminate lock 11 as originally planned. The Mississippi River lock is not numbered as it was added to the system after it was completed.