A mechanical joint is a part of machine which are used to connect the other mechanical part or mechanism. Mechanical joints may be temporary or permanent. Most types are designed to be disassemble when required.[1]

A knuckle joint is used to connect the two rods which are under the tensile load, when there is requirement of small amount of flexibility or angular moment is necessary. There is always axial or linear line of action of load.

At one end of the rod the single eye is formed and double eye is formed at the other end of the rod.Both, single and double eye are connected by a pin inserted through eye.The pin has a head at one end and at other end there is a taper pin or split pin. For gripping purpose the ends of the rod are of octagonal forms.Now, when the two eyes are pulled apart, the pin holds them together .The solid rod portion of the joint in this case is much stronger than the portion through which the pin passes.[3] 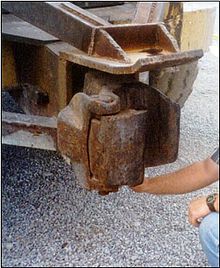 Application of knuckle joint in tractor

The modes of failure are :

2.Crushing of pin against rod.

5.The knuckle joint is also used in tractor.[4]

The assembly diagram of knuckle joint is as shown in fig.

The dimension of knuckle joints are

Outside diameter of single eye = doe

Outside diameter of double eye = dod

Consider the rod is subjected to a direct tensile stress

From above equation ,diameter of rod 'd' is obtained.

(a) Consider the failure of pin under double shear due to tensile force.

Therefore, direct shear stress induced in knuckle pin is given by Equation

(b) Failure of knuckle pin in bending

Assume there is no clearance or slack but in actual, knuckle pin is loose in forks to permit angular moment of one with respect to other, so it is subjected to bending moment in addition to shear, consider uniformly distributed load along the portion of pin.

Here,we check the pin in bending and find the value of dp

(a) To find the outside diameter diameter of single eye (doe) The single eye is subjected to a direct tensile stress, due to this single eye under tear.

(b) Due to direct tensile strength, the single eye is subjected to double shear.

The direct shear stress induced is

From this equation the outside diameter of single eye doe is obtained.

From this equation, find the outside diameter of fork (dof).

(b) Failure of double eye (fork) in double shear due to tensile load.

The shear stress is given by,

From this equation ,check shear stress if less than design, increase thickness of fork t1.

Double eye may fail in crushing due to tensile load

The crushing stress is given by,

The buckle or a coupler is a mechanical joint used to connect two members which are subjected to tensile loading which require slight adjustment of length or tension under loaded conditions. It consist of central hexagonal nut called coupler and tie rod having right hand and left hand threads. A coupler of hexagonal shape is to facilitate the turning of it with a spanner or sometime a hole is provide in the nut so that tommy bar can be inserted for rotating it. As coupler rotate, the tie rod are either pulled together or pushed apart depending upon the direction of the rotation coupler normally the tie rods are made of steel, while coupler is made of steel or C.I.

1. To tighten the members of the roof truss.

2. Used to connect link in a mechanism to transfer motion

3. Used between the two railway wagon or bogies.

4. To tighten the cable or stay ropes of electric distribution poles.

Consider a turnbuckle , subjected to an axial tensile force P. The various dimensions of the turnbuckle are calculated as follows:

Due to axial tensile load p, the rod is subjected to tensile stress. Also due to twisting moment in the tie rod.

The tie rod is design for direct tensile load of Pd=1.25P

The tensile stress induced in tie rod is given by

From above equation the core diameter of the tie rod is obtained. The nominal diameter can be selected from I.S.O metric screw threads table or it can be found by,

Consider the direct shearing of the thread at the root of the coupler nut and the screw.

(a) The direct shear stress induced in screw thread is

(b) The direct shear stress induced in nut

do = Nominal diameter of the screw

dc = Core diameter of the screw

ln = Length of the coupler nut

(c) Check of crushing of the thread

p = pitch of the thread in mm

The coupler nut is subjected to a direct tensile load P and a torque T.

Consider tearing of the coupler nut due to tensile stress induced in it. In order to account for the torque, the tensile load is taken as Pd.

The tensile stress induced in coupler nut is given by

By empirical relation, the outside diameter of the coupler nut D is taken as

Let,D1= Inside diameter of the coupler

D2 = Outside diameter of the coupler

Consider a coupler is subjected to direct tensile load P and a torque T.So for design the coupler outside diameter ,the design load is consider.

The outside diameter of the coupler D2 is taken as,

cotter joint is used to connect the two member which are subjected to the various stress.[1] The end of the bar has a hole in it and it is called a lug. The hole carries a shaft. This shaft is locked in place by a smaller pin that passes through the side of the lug and partly or completely through the shaft itself. This locking pin is named a cotter, which sometimes is also applied to the whole joint.so this joint is called as a cotter joint.[2]. A cotter joints is a flat wedge link piece of steel of rectangular cross section which is inserted through the rods at high angle to their axes .It is uniform in thickness but tapering in width , generally on one side only. Usually the taper is 1 in 30. when a special arrangement like a set-screw is provided for keeping the cotter from slackening ,its taper may be as large as 1 in 7. the end of the cotter are made narrow to facilitate the hammering for fixing and removing.cotter joins are generally use to fasten rigidly two rod s which is subjected to tensile or compressive stress along their axes. this joint is used to connect two circular rods.This joint in not suitable where the member are subjected under rotation.Thus they differ from key joints which are used to fasten shaft and hubs subjected to tensional stress.[3]

1.Connection of the piston rod with the cross heads 2.Joining of tail rod with piston rod of a wet air pump 3.Foundation bolt 4.Connecting two halves of fly wheel (cotter and dowel arrangement) COMPARISON BETWEEN KEY AND COTTER

1.Key is usually driven parallel to the axis of the shaft which is subjected to torsional or twisting stress. Whereas cotter is normally driven at right angles to the axis of the connected part which is subjected to tensile or compressive stress along its axis. 2.A key resists shear over a longitudinal section whereas a cotter resist shear over two transverse section.